St Paul's Anglican Cathedral is an Australian heritage-listed cathedral at 89 William Street, Rockhampton, Rockhampton Region, Queensland. It was designed principally by Annersley Voysey and built from 1883 to 1953. It is also known as St Paul's Church of England and St Paul's Church of England Cathedral. It was added to the Queensland Heritage Register on 21 October 1992. The associated hall and offices were listed on the Queensland Heritage Register on 23 June 2000. 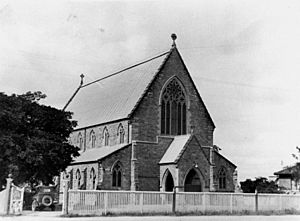 Anglican services were held in Rockhampton from the late 1850s by lay ministers. In 1859 a small timber church and school building was constructed, however this was destroyed in a storm in 1860. The pioneer rector, the Reverend Thomas Jones, arrived in Rockhampton in about 1860 and held services at Grant's Timber Yard Hall and at the local Court House. By 1862 he had raised sufficient funds to build a timber church on the site later occupied by the parish hall. This building, designed by Thomas Dixon Chater, was built on a dedicated church reserve adjoining the National School. By 1872 about £3000 had been collected for the construction of a third Rockhampton church.

Plans and specifications were prepared for the new church, later the cathedral, in Brisbane by architect, Annersley Voysey. The stonemason employed on the first part of the project was Paul Sanderson who completed external walls to the height of one metre. By 1877 the walls were no higher and the money was spent, fresh tenders were called. Amid a flurry of concerns about the strength of the foundations as well the introduction of a new plan by Queensland Colonial Architect, FDG Stanley, the construction at the church was recommenced in September 1879 to revised plans by A. W. Voysey and Frank Scarr. The masonry was continued by George Sanderson, carpentry was completed by David Wiley, plumbing by J. Wakefield and painting by W. Aspinall. Funding shortages again caused a work stoppage, this time in April 1881 just as the roof was to be started. Committee members pledged to raise £200 each and the work was recommenced. The building was completed and furnished by 18 October 1883 when it was dedicated by Bishop Matthew Hale assisted by Bishop George Stanton. The building was not consecrated until 20 June 1911 when the building fund was repaid.

In 1892 the Rockhampton Church of England diocese was formed and the church was upgraded to a cathedral. The foundation bishop was the Right Reverend Nathaniel Dawes who was enthroned on 30 November 1892. Entrance gates, designed by Louis Spier Robertson, were constructed at the cathedral in 1899.

Other changes to the building include the removal in 1968 of the high altar from the eastern wall of the chancel to a more central position on the sanctuary. This work involved the removal of a rood screen, which was installed in the 1920s. The crucifix which was part of this screen is now affixed to a wall near the lectern. The Warriors' Chapel was added to the eastern end of the one of the aisles in 1916. The Lady Chapel was created in the other aisle in about 1953. A temporary bell tower with a peal of eight bells was erected in 1946 as a thanksgiving offering for victory in World War II.

St Paul's Anglican Cathedral is a simple substantial masonry building with steeply pitched gabled roof. The building is constructed from rock faced evenly coursed sandstone and has smooth faced sandstone detailing including windows surrounds, base course, string coursing and buttress caps. The building has a rectangular plan, with apsidal chancel and rectangular gabled porched entrance. Flanking the chancel is a vestry to the south and a warriors' chapel to the north. The building is divided internally into nave and side aisles by a pointed arched arcade of smooth faced Stanwell sandstone.

The high altar is constructed with a Tasmanian black bean base and bronze and resin lining. The central figure on the altar is the Lamb from the Book of Revelation surrounded by four evangelists. The sedilia or stalls surrounding the altar are of timber. The bishop's cathedra or throne is made from red cedar and canopied in Gothic style. Four mosaics set into the floor in front of the throne are thought to date from the eighteenth century and depict mythical beasts from Ezekial and the Book of Revelation. The pulpit is carved from Stanwell sandstone and features a cross carved in relief. The font, also of Stanwell sandstone, is situated in the south western corner of the building. The sanctuary of the church houses a dean's stall, precentor's stall and canons' stalls. A brass lectern with eagle head is housed near the altar. The Lady Chapel houses a small coloured statue of the Madonna and Child known as Our Lady of Walsingham. The piece dates from 1963 and depicts the patron saint of the church. Also housed in the Lady Chapel is an icon of St Paul. The Warrior's Chapel houses a 1919 honour board bearing the names of the fallen from the diocese. A ceramic bas relief of the Madonna and Child (after Della Robbia) is attached to the wall of the southern side aisle. On the sills of some of the windows in the side aisles are small brass medallions which are modern interpretations of the fourteen Stations of the Cross.

The stained and coloured glass windows throughout the building are of high quality. The first window in the eastern end of the north aisle, of unknown origin, was placed in 1903 depicting Christ in Glory and dedicated to John Peddle. Windows in the southern aisle, with the exception of the one depicting St Paul on the Road to Damascus, were designed by William Bustard of Brisbane. The three central sanctuary lights (Messrs Lawndes and Dowry, London, after the design of Caroline Townshead) were placed in the memory of the first bishop, Nathaniel Dawes, in 1914, depicting the Agony and Crucifixion, the Risen Christ and the Day of Pentecost. The two windows flanking these were placed in 1921 and also made by Messrs Lawndes and Dowry in memory of Marion Dawson, depicting the Annunciation and Visitation and the eucharistic worship of the church.

St Paul's Anglican Cathedral was listed on the Queensland Heritage Register on 21 October 1992 having satisfied the following criteria.

The cathedral demonstrates the growth of Rockhampton during the late nineteenth century. The substantial sandstone building constructed by 1883 became a cathedral in 1892 when the Diocese of Rockhampton was formed.

The building has aesthetic merit as a well composed building and a Rockhampton landmark. Features of the building have individual significance as well crafted items, including internal furnishings and stained glass panels.

The building has special associations for the Anglican Community of central and north Queensland as their cathedral.

The building is associated with the architect, Annersley Voysey and with many influential archbishops of the Rockhampton Diocese.

All content from Kiddle encyclopedia articles (including the article images and facts) can be freely used under Attribution-ShareAlike license, unless stated otherwise. Cite this article:
St Paul's Cathedral, Rockhampton Facts for Kids. Kiddle Encyclopedia.