Steve Hart (1860 – June 28, 1880) was an Australian bushranger and a member of the Kelly Gang. A close friend of Ned Kelly's brother, Dan Kelly, Hart was caught up in the murder of three policemen at Stringybark Creek. He was killed during the siege at Glenrowan, Victoria.

Hart was a small man, and a very good horse rider. His brother Nicholas was a jockey. One story says Steve worked as a jockey around Beechworth and Wangaratta, and won 'The Benalla Handicap' after a protest was upheld. He did not open farm gates, and always jumped them with his horse.

Hart took part in the bank robberies at Euroa and Jerilderie. At Euroa he met an old school friend of his, Francis 'Fanny' Shaw (sometimes known as Maggie Shaw) and through her, the police found out his name. Hart also stole a watch from Robert Scott, the bank manager. When a bank worker, Bob Booth, asked him for something to remember the visit by, Hart gave him a lead bullet carved with the letter 'H'.

At Jerilderie in 1879, the Kelly gang held many people hostage in the Royal Hotel before robbing the bank. Hart stole a watch from Reverend Gribble, a parson at the Protestant church. Ned told Hart he was a common thief and made him give the watch back. After Jerilderie, Hart went into hiding with the gang for most of 1879, although Hart did go to a St.Kilda doctor to be treated for a foot problem. 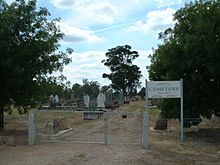 Greta Cemetery, where Steve Hart is buried in an unmarked grave

In June 1880 Ned Kelly came up with a plan to get his mother released from prison. Dan Kelly and Joe Byrne went to Beechworth and killed their friend Aaron Sherritt who they thought was a police spy. They knew this would bring many police by train to Beechworth to capture them. In the meantime Hart and Ned Kelly had gone to Glenrowan and forced railway workers to pull up the train tracks. They hoped the police train would crash, and then wearing home made armour they would capture the surviving policemen. These would be held as hostages until Ellen Kelly was set free.

Hart and Kelly forced many people of the town into a small hotel owned by Ann Jones. They were joined by Dan Kelly and Byrne who had ridden quickly across country from Beechworth. They waited at the hotel for the police. The plan failed when news of the Sherritt murder took a long time to reach Melbourne. The people kept at the hotel were becoming difficult to keep under control. Ned Kelly let one man go free at 3.00am, the school teacher Thomas Curnow, who said he had to get home to his wife. Instead he went to the train line and was able to stop the police train safely. The police went to the hotel and began shooting. It is estimated that 15,000 bullets were fired. Joe Byrne was shot dead in the front room of the hotel. Ned Kelly left the hotel in the early morning, probably to meet with other men who were going to help him capture the train. He was captured by the police.

At 10.00am the police were forced to stop shooting to allow some of the hostages to escape. Several, including the hotel owner's son had been shot dead. Dan Kelly's sister, Maggie Skillion, and a Catholic priest Father Gibney tried to go to the hotel to tell Steve and Dan to give themselves up, but were stopped by the police. The police wanted a cannon to be sent from Nelbourne so they could blast the two men out. At 2.30pm the police set the hotel on fire, and Father Gibney rushed inside. Gibney saw the bodies of Hart and Dan Kelly lying side by side in a room at the back of the hotel, with their heads resting on blankets. They had removed the armour which was placed beside them. It is most likely they had killed themselves.

The bodies of Hart and Kelly were badly burned during the fire. People who saw the burned and blackened bodies were unable to tell which was Dan Kelly and which was Steve Hart. Hart's body, little more than a blackened stump, was taken by his brother, Dick Hart, and buried at Greta Cemetery the following day, 29 June 1880, in the same grave as Dan Kelly. He was 21 years old. After the grave was filled in, the whole area was ploughed over to keep the site of the grave hidden. The family was worried that the police would still try to get the bodies. Hart's armour is now on display at the Victoria Police Museum in Melbourne.

Over the years there have been claims that Hart and Dan Kelly did not die at the hotel, but escaped and went to live in Queensland. A man named Billy Meade, as he was dying in 1938, told a nurse he was really Hart. Another story says Hart and Dan Kelly went to South Africa. After serving in the Second Boer War; also called the South African War, they went to India, where Hart is said to have drowned himself in Calcutta in 1917. There is no evidence to prove these stories.

All content from Kiddle encyclopedia articles (including the article images and facts) can be freely used under Attribution-ShareAlike license, unless stated otherwise. Cite this article:
Steve Hart Facts for Kids. Kiddle Encyclopedia.