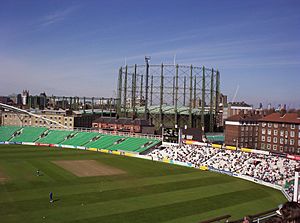 Surrey's home ground The Oval, overlooked by the famous gasholders.

Surrey County Cricket Club (Surrey CCC) is a first-class club in county cricket, one of eighteen in the domestic cricket structure of England and Wales. It represents the historic county of Surrey, including areas that now form South London. Teams representing the county are recorded from 1709 onwards; the current club was founded in 1845 and has held first-class status continuously since then. Surrey have played in every top-level domestic cricket competition in England, including every edition of the County Championship (which began in 1890).

The club's home ground is The Oval, in the Kennington area of Lambeth in South London. They have been based there continuously since 1845. The club also has an 'out ground' at Woodbridge Road, Guildford, where some home games are played each season.

Surrey's history includes three major periods of success. The club was unofficially proclaimed as "Champion County" seven times during the 1850s; it won the title eight times in nine years from 1887 to 1895 (including the first official County Championship in 1890); and won seven consecutive titles from 1952 to 1958. Surrey won 23 of its 28 county matches in 1955, the most wins by any team in the County Championship and a record which can no longer be beaten (as fewer than 23 matches have been played each season since 1993). Surrey have won the County Championship 19 times outright (and shared once), a number exceeded only by Yorkshire, with their most recent win being in 2018.

The club's badge is the Prince of Wales's feathers, used since 1915, as the Prince of Wales owns the land on which The Oval stands. The club is associated with the colour chocolate brown, wearing brown caps and helmets, and is sometimes known by the nickname 'Brown Caps'.

All content from Kiddle encyclopedia articles (including the article images and facts) can be freely used under Attribution-ShareAlike license, unless stated otherwise. Cite this article:
Surrey County Cricket Club Facts for Kids. Kiddle Encyclopedia.