The Tasmanian temperate rain forests are a temperate broadleaf and mixed forests ecoregion in western Tasmania. The ecoregion is part of the Australasian realm, which includes Tasmania and Australia, New Zealand, New Guinea, New Caledonia, and adjacent islands.

Rainforest communities in Australia are classified as closed forests in which the canopy comprises 70–100% cover. It can be divided into tropical, subtropical, monsoon and temperate rainforest. Tasmanian rainforest is classified and as cool temperate rainforest, it represents the most floristically complex and best developed form of this forest type in Australia. In Tasmania, they can be found in the West, Savage River National Park, South West, North East and in patches on the East Coast. On the mainland of Australia, cool temperate rainforest have a wide variety of woodland trees, but Tasmania only has a limited number of woodland and vascular plants such as mosses, liverworts, lichen and fungi. Because of this, the definition of Tasmanian cool temperate rainforest was redefined in the 1980s to allow for communities that did not meet the canopy requirements and clearly separate cool temperate rainforest from mixed forest; The current definition states that cool temperate rainforests are those with trees usually greater than 8 m (26 ft) in height and capable of regenerating in the absence of large scale catastrophic events, such as fire. These forests are climax vegetation and are dominated by angiosperms such as Nothofagus cunninghamii (myrtle beech), Atherosperma moschatum (sassafras), and Eucryphia lucida (leatherwood) as well as gymnosperms such as Athrotaxis selaginoides (King Billy Pine), Lagarostrobos franklinii (huon or macquarie pine) and Phyllocladus aspleniifolius (celery-top pine). The limited number of woody species is thought to be due to repeated glaciation.

Tasmanian cool temperate rainforest can be divided into four types: Callidendrous rainforest, Thamnic rainforest, Implicate rainforest and Open Montane. These four major types differ in many of their characteristics such as structure, floristics, distribution, level of endemism and ecology.

The Tasmanian cool temperate rainforest is composed of two alliances, the myrtle-beech (Nothofagus cunninghamii) alliance and the pencil pine (Athrotaxis cupressoides) alliance. The former is made up of callidendrous, thamnic and implicate, whilst the latter is all open montane. 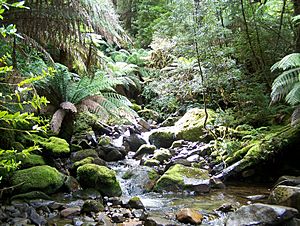 This is the simplest rainforest community in Tasmania; it is typically represented by medium to tall forests dominated by Nothofagus cunninghamii and/or Atherosperma moschatum, often together with Leptospermum lanigerum (woolly tea-tree) or Acacia melanoxylon (Australian blackwood). Typically, these forests are at least 40 m (130 ft) in height. Trees are usually well formed and widely spaced, and the understorey is open and often described as park-like. The diversity of woody species is low, and they are usually sparse and inconspicuous throughout the understorey. However, at mid to low altitudes, the understorey may contain a few small trees or shrubs such as Olearia argophylla (musktree), Pimelea drupacea (cherry riceflower), Pittosporum bicolor (cheesewood), Aristotelia peduncularis (heart berry) and Comprosma quadrifida. 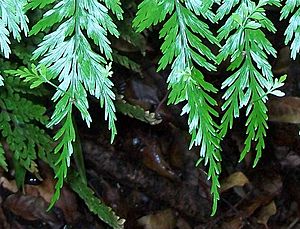 Callidendrous rainforests occurs in the eastern half of the state and in northwestern and central Tasmania.

The shrub layer is more prominent and has an increased diversity of woody trees. Common species are: Anopterus glandulosus (Tasmanian laurel), Anodopetalum biglandulosum, Acradenia frankliniae (whitey-wood or wirewood), Archeria hirtella, Archeria eriocarpa, Cenarrhenes nitida (native plum), Trochocarpa cunninghamii, Trochocarpa gunnii (sweet-scented trochocarpa), Orites diversifolia (silkwood), Prionotes cerinthoides (climbing heath), Richea pandanifolia (pandani or giant grass tree) and, at high altitudes, Richea scoparia (honey richea). The increase in understorey shrub is due to the larger number of gaps in the canopy, and the differing light requirements of competing species. Fern diversity decreases, as a result, because of the decrease in light from the understorey. Parablechnum wattsii (hard water fern) is the main ground fern; it prefers damp shaded areas and forms a very dense layer in some areas but can be absent in others. Small epiphytes are widespread, these include Hymenophyllum rarum (a filmy fern) and Grammitis billardierei. Apteropteris applanata can occur in areas containing Athrotaxis. Other larger epiphytes are usually present, but they are rarely prominent. At higher altitudes, the general appearance resembles that of a callidenderous rainforest, but the floristic differences remain the same.

Low and dominated by Athrotaxis cupressoides or Athrotaxis selaginoides (less commonly). Open canopy, widely spaced trees allow bright light to penetrate the lower levels of the forest. In some communities, the canopy can be dense and instead resemble a high altitude callidendrous forest. Understorey may be dominated by either Poa (grasses) or Sphagnum (mosses) or commonly, low shrubs that are less than half the height of the forest. There is a high diversity of woody species but a low diversity of ferns. Multiple species from nearby treeless vegetation are present, but their classification as rainforest species is yet to be confirmed. Understorey shrubs include: Nothofagus cunninghamii, Nothofagus gunnii, Diselma archeri, Podocarpus lawrencei, Richea pandanifolia, Richea scoparia, Richea sprengelioides, Orites acicularis, Orites revoluta, Microstobos niphophilus, Tasmannia lanceolata, Epacris serpyllifolia and Baeckea gunniana. Ferns are usually poorly developed with larger ground species absent or confined to rocks, Gleichenia alpina is the exception to this observation. Small species such as Hymenophyllum peltatum and Apteropteris applanata can sometimes make an appearance. – occur on the Central Plateau but can extend as small outliners to the mountains further south.

Geology and soils are important factors in Tasmanian ecology. Callidendrous forests require good-quality sites where fertile soils occur over rocks such as basalt, dolerite and the more nutrient-rich granites. Implicate forests are at the other extreme, and mostly grow in organic soils or mineral soils derived from nutrient-poor rock types such as quartzites and silicous conglomerates. Thamnic forests tend to prefer an intermediate substrate. With the exception of open montane forests, altitude seems to have little effect on the floristic differences between community types.

In 1982, the United Nations Educational, Scientific and Cultural Organization (UNESCO) designated the northern portion of the ecoregion a World Heritage Site.

Protected areas in the ecoregion include:

All content from Kiddle encyclopedia articles (including the article images and facts) can be freely used under Attribution-ShareAlike license, unless stated otherwise. Cite this article:
Tasmanian temperate rainforests Facts for Kids. Kiddle Encyclopedia.