Teenage Mutant Ninja Turtles is an American animated television series, based on the fictional comic book characters of the same name. The series premiered on February 8, 2003 as part of the Fox's FoxBox programming block (later known as 4Kids TV) and ended on March 27, 2010.

The series was announced on May 7, 2002 and is co-produced by 4Kids Entertainment and franchise creators Mirage Studios, which co-owned rights to the show, with animation provided by the studio Dong Woo.

Unlike the 1987 TV series, the 2003 series more closely matches the tone of the original comics, with a greater emphasis on action and themes of familial bonds. As a result, the 2003 series is more adult-oriented, while still being considered appropriate for younger audiences. The series adapts a large scope of story arcs from the comics, with the Turtles' adventures combining elements of both fantasy and science fiction. They also fight the Foot Clan led by Shredder as well as the Purple Dragons led by Hun and the mad scientist Baxter Stockman. Later seasons have the Turtles contending with Agent John Bishop of the Earth Protection Force. By the end of the third season, the Shredder is revealed to be an Utrom criminal named Ch'rell. Upon his defeat at the hands of the Turtles, Ch'rell is exiled to the ice asteroid Mor Gal Tal.

During the fourth season, Karai continues to lead the Foot Clan as a female Shredder, Hun turns the Purple Dragons into a crime syndicate, and Baxter Stockman works for Agent John Bishop's group. Towards the end of the fourth season, the series undergoes a format change as the Turtles would be recruited by the Ninja Tribunal to use new mystic abilities to combat another version of the Shredder where this one is labeled as the original Shredder before Ch'rell assumed his identity. Season five would be the last to use the original character designs and animation style with its plot concluding the series' main storyline.

The sixth season, subtitled "Fast Forward", would retool the series with a new art style and comedic tone. The season's plot focused on the Turtles being transported about 100 years into the future to the year 2105; where they meet and befriend Cody Jones, the great grandson of April and Casey. They must also contend with futurist enemies like Sh'Okanabo and his minion Viral as well as dealing with the activities of Cody's uncle Darius Dun.

Fast Forward's main story would conclude in the seventh and final season, subtitled "Back to the Sewer", while sporting another redesign for the entire cast inspired by the designs from the 2007 TMNT film. After returning to the present day, the Turtles must battle a cybernetic version of the Shredder which was the result of Viral merging with the data of the Utrom Shredder. There is also a running subplot centered on the wedding of April and Casey.

The 2009 TV movie Turtles Forever serves as the finale to the 2003 series and centers around the Turtles encountering their 1987 animated counterparts, who have accidentally been transported to the 2003 Turtles' reality. To make matters worse, the 80's Shredder and Krang as well as their minions Bebop and Rocksteady free Ch'rell from his imprisonment as Hun and Karai realign themselves with Ch'rell. 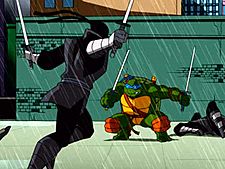 Leonardo fighting the Foot Clan's ninjas in the season 1 episode "Shredder Strikes Back: Part One".

The voice director for the series was Susan Blu (seasons 1–5) and Roy Burdine (Fast Forward and Back to the Sewer), while the ADR voice director was Darren Dunstan.

In May 2002, 4Kids Entertainment announced to produce a new animated Teenage Mutant Ninja Turtles TV series for the FoxBox programming block to air on Saturday mornings. The series was renewed for a second season in the summer of 2003; the third in May 2004; the fourth in April 2005. The "Ninja Tribunal" was originally intended to be the fifth and final season of the 2003 Teenage Mutant Ninja Turtles animated series, but the schedule was changed to try to increase interest in the series and "Fast Forward" became the fifth season. The "Ninja Tribunal" episodes were scheduled to be released on DVD sometime in early 2007, but 4Kids Entertainment later removed them from their release schedule and the season was promoted in commercials as Teenage Mutant Ninja Turtles: The Lost Episodes.

Series development was headed by producer Lloyd Goldfine, who had known the Ninja Turtles since the original Mirage Studios comics and declared he "loved the charm of the cartoon", but much preferred the idea of turtles raised to be ninja assassins, and was interested in using said plot while also being family friendly. Once he heard 4Kids had an interest in the franchise, Goldfine suggested going straight to Mirage for guidance, and then he and other company representatives went to the company's headquarters in Northampton, Massachusetts. Turtles co-creator Peter Laird and Mirage CEO Gary Richardson approved their pitch, and Mirage remained very close during development, with Laird reading every outline and draft of the script, and approving most of the character designs.

All content from Kiddle encyclopedia articles (including the article images and facts) can be freely used under Attribution-ShareAlike license, unless stated otherwise. Cite this article:
Teenage Mutant Ninja Turtles (2003 TV series) Facts for Kids. Kiddle Encyclopedia.