Tidworth is a garrison town and civil parish in south-east Wiltshire, England, on the eastern edge of Salisbury Plain. Lying on both sides of the A338 about 3 1⁄2 miles (5.6 km) north of the A303 primary route, the town is approximately 8 miles (13 km) west of Andover, 12 miles (19 km) south of Marlborough, and 13 miles (21 km) north by north-east of Salisbury. The population of the parish at the 2011 census was approximately 10,600.

Originally two villages – North Tidworth and South Tidworth – the modern town is dominated by Tidworth Camp, a large British Army site. Swinton Barracks, another Army site, is in the west of the parish.

Tidworth was listed in the Domesday Book as Todeorde, in the Andover Hundred, in "Hantscire". It was once the family home of the Studd family. On John Speed's maps (1611), the town is referred to as Tudworth, North Tudworth belonging to Amesbury hundred in "Wilshire", and South Tudworth to Andover hundred in "Hamshire". When the boundary between Wiltshire and Hampshire was redrawn in 1992, the old distinction between North Tidworth and South Tidworth vanished, and the entire town became part of Wiltshire. The two parts remained as separate civil parishes until 1 April 2004.

Its situation near the A303, and hence the M3, places Tidworth within commuting distance of London.

Tidworth has a small commercial area containing two supermarkets (a Lidl and a large Tesco), two veterinary surgeries, a pharmacy, and other shops and services including a 900mobile phone shop. A dental surgery serves Tidworth and the surrounding area, covering approximately 5,000 people. In 2003 a new medical centre was completed, the cost being split between the Ministry of Defence and the NHS, as it serves the armed forces and their dependants within the surrounding area.

Tidworth has one of the lowest crime rates per thousand in Wiltshire, and between the years of 1990 and 2004 only one major crime took place. In 2014, it was rated by the Royal Mail as the most attractive postcode area to live in in England.

The Anglican Church of the Holy Trinity was rebuilt in the 15th century on the site of a church from the 12th or 13th centuries. It is Grade II* listed.

The Roman Catholic Church of St George and St Patrick, North Tidworth, was built in 1912. 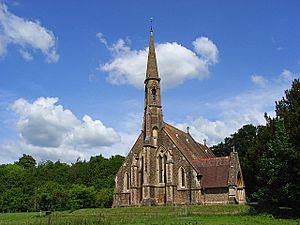 St Mary's Church in South Tidworth was built in 1878. It is Grade I listed and is now in the care of the Churches Conservation Trust.

The community is served by three primary schools and an infant school.

The Wellington Academy, which was partly sponsored by Wellington College, opened in September 2009, replacing Castledown School. The academy has a sixth form college, an all-weather sports pitch, and dedicated Combined Cadet Force facilities. The parent unit of the CCF is 26 Royal Engineers, housed nearby at Swinton Barracks.

Duggie Fields, artist, was born in Tidworth, as was musician James Blunt in 1974.

Owners of the South Tidworth estate and Tedworth House include John Smith (1656–1723), Speaker of the House of Commons and Chancellor of the Exchequer; Thomas Assheton Smith (1752–1828), owner of Dinorwic quarry and MP; and his son Thomas (1776–1858), cricketer, foxhunter, yacht designer and MP, who built the present house.

Later, Tedworth House was leased to Edward Studd, father of the Studd brothers cricketers, including CT Studd who played in the match which saw the birth of The Ashes. It was then bought by Sir John Kelk (1816–1886), a building contractor whose public works included the Albert Memorial.

All content from Kiddle encyclopedia articles (including the article images and facts) can be freely used under Attribution-ShareAlike license, unless stated otherwise. Cite this article:
Tidworth Facts for Kids. Kiddle Encyclopedia.