Tulle (Occitan: Tula) is a French commune, the prefecture of the Corrèze department in central France. It is in the Nouvelle-Aquitaine region. It is also the capital of the arrondissement of Tulle.

Tulle is in the valley of the Corrèze river at the confluence of this river with several tributaries: the Solane and the Céronne on the right side, and Saint-Bonnette and Montane on the left side. The city is in narrow part of the valley along several Kilometres.

The commune of Tulle is surrounded by the communes:

Three rivers flow through the communeː the river Diège (the town sometimes is called Ussel-sur-Diège), the river Sarsonne and the stream Étang Roux.

The climate of Tulle, in the Köppen climate classification, is Cfb - Oceanic climate with template summers.

The inhabitants of this city are known, in French, as Tullistes.

Evolution of the population in Tulle 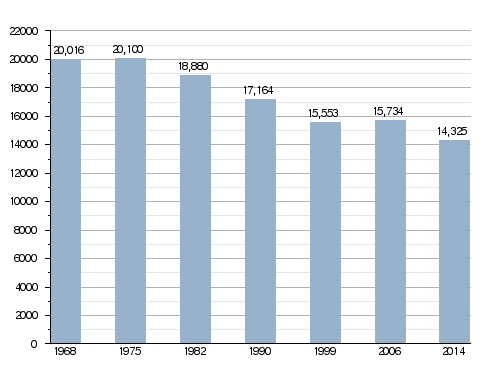 Tulle is the prefecture of the Corrèze department, the capital of the arrondissement of Tulle and the administrative centre (French: chef-lieu) of the canton of Tulle.

It is part of the intercommunality Tulle Agglo (French: Communauté d'agglomération Tulle Agglo).

Tulle is twinned with:

All content from Kiddle encyclopedia articles (including the article images and facts) can be freely used under Attribution-ShareAlike license, unless stated otherwise. Cite this article:
Tulle Facts for Kids. Kiddle Encyclopedia.