As of September 19, at least 86 fatalities have been attributed to Mangkhut, including 81 in the Philippines, 4 in mainland China, and 1 in Taiwan.

On September 5, 2018, the Joint Typhoon Warning Center (JTWC) began monitoring a tropical disturbance near the International Dateline. Steady development ensued over the following days, and the Japan Meteorological Agency (JMA) classified the system as a tropical depression on September 7. The depression soon intensified into a tropical storm, upon which it received the name Mangkhut. Throughout September 8 and 9, the system underwent rapid intensification. Tight banding features wrapped around a developing eye feature. Favorable environmental conditions, including low wind shear, ample outflow aloft, high sea surface temperatures, and high ocean heat content. Mangkhut achieved typhoon strength on September 9. A well-defined 18 km (11 mi) eye became evident on satellite imagery as the typhoon approached the Northern Mariana Islands and Guam. The JTWC analyzed Mangkhut as a Category 2-equivalent typhoon with one-minute sustained winds of 165 km/h (105 mph) as it tracked near Rota around 12:00 UTC on September 10. The JMA assessed ten-minute sustained winds to be 155 km/h (100 mph) at this time. 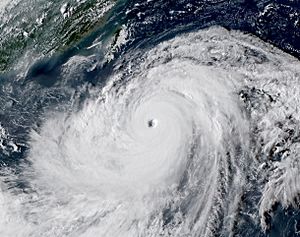 Substantial intensification ensued on September 11, as Mangkhut traversed the Philippine Sea. A second bout of rapid intensification took place as the storm consolidated significantly; a well-defined 39 km (24 mi) eye became established during this time. The JTWC analyzed Mangkhut to have reached Category 5-equivalent intensity by 12:00 UTC, an intensity it would maintain for nearly four days. The JMA assessed the typhoon's peak intensity to have occurred at 18:00 UTC, with 10-minute sustained winds of 205 km/h (125 mph) and a central minimum pressure of 905 hPa (mbar; 26.73 inHg). The JTWC noted additional strengthening on September 12, and assessed Mangkhut to have reached its peak intensity at 18:00 UTC, with one-minute sustained winds of 285 km/h (180 mph). The typhoon made landfall on Cagayan Province along the northern tip of Luzon on September 14, as a Category 5-equivalent super typhoon, with 1-minute sustained winds of 270 km/h (165 mph). This made Mangkhut the strongest storm to strike Luzon since Typhoon Megi in 2010, and the strongest nationwide since Typhoon Haiyan in 2013.

Traversing the mountains of Luzon weakened Mangkhut before it emerged over the South China Sea on September 15. The typhoon subsequently made landfall again on Taishan coast of Jiangmen City, Guangdong Province, China at 5 p.m. China Standard Time on September 16. 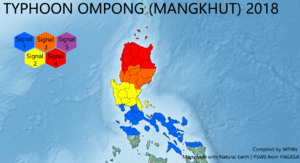 Tropical cyclone warning signals were hoisted by the Philippine Atmospheric, Geophysical and Astronomical Services Administration as early as September 13. Preemptive and forced evacuations were implemented, especially in the Ilocos, Cagayan Valley and Cordillera administrative regions, the three regions widely expected to be severely affected by Mangkhut. School class suspensions were announced as early as September 12 in preparation for the incoming typhoon. Medical and emergency response teams were placed on standby, and ₱1,700,000,000 worth of relief goods were prepared by September 13.

On September 14, the Hong Kong Government held a rare cross-department press conference over the preparation of the super typhoon Mangkhut, to remind Hong Kong citizens to "prepare for the worst".

On September 16, the Hong Kong Observatory issued the Hurricane Signal No. 10, which is the highest level of tropical cyclone warning signals in Hong Kong, for 10 hours. This marked only the third time that this warning has been issued for the region since 1999, with the others being with Typhoon Hato in 2017 and Typhoon Vicente in 2012. The Hong Kong Government convened an inter-departmental meeting on September 12 to discuss possible responses to the storm.

The Fujian Meteorological Bureau issued an orange alert for the typhoon, the second highest alert level, on September 15.

On September 16, National Meteorological Center of CMA renewed a red alert for Typhoon Mangkhut, which is the highest level of alerts in China. On the same day, the Hainan Meteorological Bureau issued an orange alert for the typhoon. 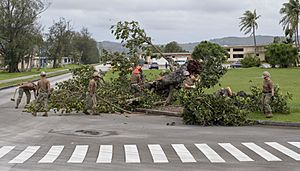 About 80% of the island lost electricity.

A tornado was reported in Marikina, eastern Metro Manila, on the night of September 14 (Friday), injuring two people. Over 105,000 families evacuated from their homes, and several airports in northern Luzon closed and airlines cancelled their flights until September 16.

On September 19, the National Disaster Risk Reduction and Management Council confirmed that at least 81 people were killed during the typhoon, 70 of whom died in a small mine that collapsed in the town of Itogon, Benguet, where dozens of landslides buried homes.

Francis Tolentino, a political adviser of President Rodrigo Duterte, announced that an estimated 5.7 million people nationwide had been affected by the storm. Luzon suffered extensive losses which more than doubled the expected worst-case scenario outline by Agriculture Secretary Emmanuel Piñol. As of September 18, the NDRRMC estimated 14.3 billion pesos (US$265 million) in damages in the Philippines, with assessments continuing.

A 30-year old female teacher visiting Fenniaolin Beach in Yilan County was swept out to sea by a wave. Her body was recovered two days later. 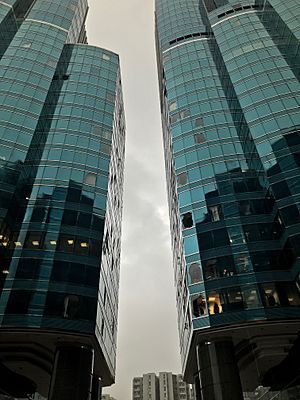 Mangkhut is regarded as the strongest typhoon to strike Hong Kong since Typhoon Ellen in 1983. Mangkhut caused flooding, especially in low-lying and coastal areas, and many trees were knocked over. Sustained winds of up to 180 kilometres per hour (110 mph) and gusts of up to 228 kilometres per hour (142 mph) caused the territory's many high-rises to sway and some roofs to be torn off. Glass windows of many buildings were shattered, and the curtain walls of the Harbour Grand Kowloon were blown out. A structure on a high-rise under construction in Tai Kok Tsui collapsed onto an adjacent building, which had to be evacuated by police. Many roads were blocked, and service on the Mass Transit Railway (MTR) was halted on all above-ground sections of track.

Some buildings around the Hong Kong Island, Kowloon and New Territories area suffered broken windows and water damage. Blinking lights were reported in a lot of residential buildings as well. Serious flooding was reported in many seaside housing areas such as Heng Fa Chuen, Shek O, Lei Yue Mun, villages in Tuen Mun, and Tai O. About 1,219 people sought refuge in emergency shelters opened by the Home Affairs Department. The Hong Kong International Airport cancelled and delayed a total of 889 international flights. More than 200 people were injured, but no fatalities have been reported. Due to the substantial damage caused, the Education Bureau announced that all schools would be closed on September 17 and September 18.

After the storm had passed, massive crowds filled the city's Mass Transit Railway stations and caused major delays. Most of the city's 600 bus routes were also out of service due to roads blocked by debris. 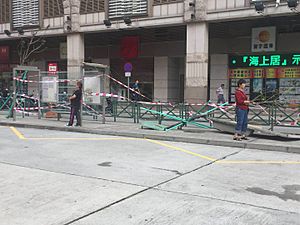 The ceiling of the Oriental Pearl Terminal Station waiting area was blown away by strong winds.

Storm surges reached a height of 1.9 metres (6 ft 3 in). About 21,000 homes lost power and 7,000 homes lost internet access, and 40 people were injured. For the first time in history, all casinos in Macau were closed. 191 flights on Saturday and Sunday (September 15 and 16) were cancelled to and from Macau International Airport.

Typhoon Mangkhut caused over 2.45 million people to be evacuated. In Shenzhen, the storm caused power failures in 13 locations, flooded the Seafood Street, and caused 248 tree falls. Transport was shut down in Southern China, and at least four people in Guangdong were killed in this typhoon. In Zhuhai, markets, schools and public transport were closed or limited in the wake of the storm on Monday, September 17, and residents were requested to minimize non-essential travel. Ferry services from Zhuhai's Jiuzhougang Port to Shenzhen and Hong Kong were suspended indefinitely.

Total economic losses in the province exceeded ¥4.2 billion (US$612 million).

All content from Kiddle encyclopedia articles (including the article images and facts) can be freely used under Attribution-ShareAlike license, unless stated otherwise. Cite this article:
Typhoon Mangkhut Facts for Kids. Kiddle Encyclopedia.