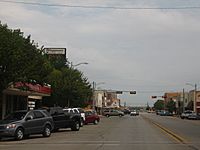 A glimpse of downtown Vernon, with Waggoner National Bank in the left background 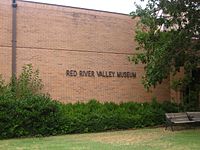 The Red River Valley Museum is located on the Vernon College campus.

Vernon is a city in Wilbarger County, Texas, United States. It is the county seat, and as of the 2010 Census had a population of 11,002.

The original town was called Eagle Springs by the Tonkawa Indians as early as 1858. After the American Civil War, more settlers began moving in the area, and in 1880 they applied for a post office as Eagle Flat. However, the U.S. Post Office rejected the name, saying too many Texas towns were already called Eagle something. The town then chose the name Vernon, after George Washington's home, Mount Vernon.

An estimated seven million head of cattle passed through Vernon on the Great Western Cattle Trail between 1873 and the 1890s. The historic trail was located ninety miles west of and parallel to the better-known Chisholm Trail.

The climate in this area is characterized by hot, humid summers and generally mild to cool winters. According to the Köppen Climate Classification system, Vernon has a humid subtropical climate, abbreviated "Cfa" on climate maps.

Vernon is host to various events annually including the four-day Santa Rosa Roundup rodeo in May, which is sponsored by the local Santa Rosa Palomino Club. VSMCA is host to Summer's Last Blast, a car show that shows a variety of the 50s - late 2000s cars, which is held the second weekend of August every year.

On April 10, 1979, Vernon and surrounding Wilbarger County were struck by an F4 tornado, a part of a large storm in the Red River Valley. Much of Vernon was damaged or destroyed, and eleven people were killed as the tornado passed through Foard and Wilbarger counties before it dissipated in a rural portion of Tillman County, Oklahoma. That same day, tornadoes also devastated the larger nearby cities of Wichita Falls, Texas, and Lawton, Oklahoma.

In 1905, the Wichita Mill and Elevator Company, owned and managed by the entrepreneur Frank Kell of Wichita Falls, established a mill in Vernon. Kell's business partner was W. O. Anderson.

The nearby Waggoner Ranch holds the distinction of being the largest spread in Texas under one fence. The ranch remains operational, with business in petroleum, farming, horses, and cattle. The Waggoner produces some of the best ranch horses in Texas, many from the breeding of the quarter horse Poco Bueno. According to the wishes of E. Paul Waggoner, Poco Bueno is buried in a standing position on the corner at the main entrance to the ranch.

Vernon High School's football team, the Vernon Lions, was one of the strongest programs in the 3A division until recently. The Lions won the 3A state championship in 1990 and were ranked number one all year. They finished in second place the previous year. The Lions have finished as semifinalists in 2003 and 2006, and were ranked in top 10 for the 2007 season, when they lost in a close game in the state quarterfinals to Snyder. The overall record of Vernon High School football is 595-363-38 (a winning percentage of 62.27%)

Vernon High School's first team state championship came in the 1984–1985 season as the Lady Lions won the 3A girls basketball state title. The Lady Lions returned to Austin the next season and were defeated in the semifinals.

Vernon High School is also known for its tennis team, which has completed 23 straight years of going to the Texas Tennis Coaches Association State Team Tennis Tournament. VHS Tennis has six TTCA state team tennis titles and has finished no lower than third place in 22 of the 23 years. 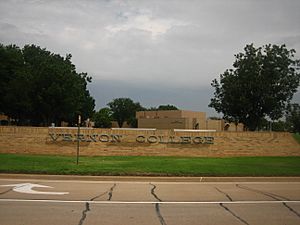 Vernon College is a community college in Vernon. 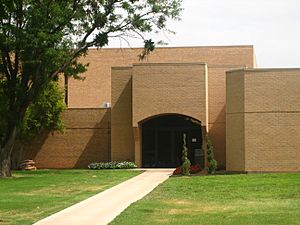 Vernon is located 50 miles northwest of Wichita Falls, Texas and about 160 to 180 miles from surrounding metropolitan areas, including Amarillo, Abilene, Oklahoma City, and the DFW Metroplex. The city is served by four U.S. routes: 70, 183, 283, and 287.

Bus transportation is available to Amarillo and Dallas-Fort Worth. Wilbarger County Airport is located 5 miles north of Vernon and the nearest airport with scheduled flights is Wichita Falls Municipal Airport 50 miles to the east, which predominantly offers flights of commuter airlines to Dallas-Fort Worth International Airport.

The area is also served by a BNSF line bypassing downtown from Ft. Worth to Amarillo.

All content from Kiddle encyclopedia articles (including the article images and facts) can be freely used under Attribution-ShareAlike license, unless stated otherwise. Cite this article:
Vernon, Texas Facts for Kids. Kiddle Encyclopedia.