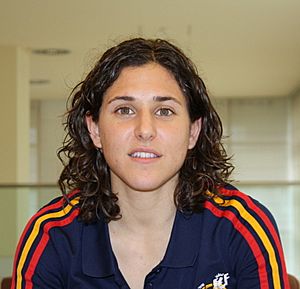 Verónica Boquete (born 9 April 1987 in Santiago de Compostela) is a Spanish footballer who plays as a midfielder for the Associazione Calcio Milan of Serie A in Italy. She was international with the Spanish team, of which she became captain.

Since February 2015 she has been a UEFA ambassador for the development of women's football, and since 2017 she has been part of the CommonGoal community of footballers, an initiative led by Juan Mata, also from Spain, who fights for the social reintegration of children in through the funds raised with 1% of the salary of the community footballers.

All content from Kiddle encyclopedia articles (including the article images and facts) can be freely used under Attribution-ShareAlike license, unless stated otherwise. Cite this article:
Vero Boquete Facts for Kids. Kiddle Encyclopedia.