Vitellaria paradoxa (formerly Butyrospermum parkii), commonly known as shea tree, shi tree, or vitellaria, is a tree of the family Sapotaceae. It is the only species in the genus Vitellaria, and is indigenous to Africa.

The shea tree is a traditional African food plant. It has been claimed to have potential to improve nutrition, boost food supply in the "annual hungry season", foster rural development, and support sustainable land care.

The tree starts bearing its first fruit when it is 10 to 15 years old; full production is attained when the tree is about 20 to 30 years old. It then produces nuts for up to 200 years.

The fruits resemble large plums 4 to 8 centimetres long weighing between 10 hingga 57 grams each. These fruits take 4 to 6 months to ripen; the average yield is 15 to 20 kilograms (33-44 lbs.) of fresh fruit per tree, with optimum yields up to 45 kilograms (99 lbs.). Each kilogram of fruit gives approximately 400 grams (14 oz.) of dry seeds.

Shea butter is composed of five principal fatty acids: palmitic, stearic, oleic, linoleic, and arachidic (see Table below). About 85 to 90% of the fatty acid composition is stearic and oleic acids. The relative proportion of these two fatty acids affects shea butter consistency. The stearic acid gives it a solid consistency, while the oleic acid influences how soft or hard the shea butter is, depending on ambient temperature.

The proportions of stearic and oleic acids in the shea kernels and butter differ across the distribution range of the species. Ugandan shea butter has consistently high oleic acid content, and is liquid at warm ambient temperatures. It fractionizes into liquid and solid phases, and is the source of liquid shea oil. The fatty acid proportion of West African shea butter is much more variable than Ugandan shea butter, with an oleic content of 37 to 55%. Variability can be high even locally, and a tree that produces hard butter can grow with one that produces soft butter.

Nuts are gathered from a wide area for local production, so shea butter consistency is determined by the average fatty acid profile of the population. Within West Africa, shea butter from the Mossi Plateau region of Burkina Faso has a higher average stearic acid content, and so is usually harder than shea butter from other West African regions. 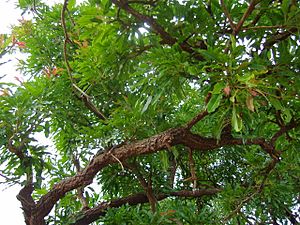 Leaves of a shea nut tree 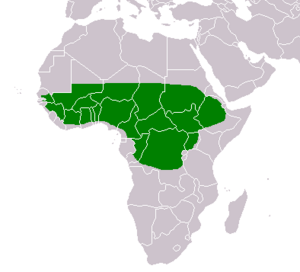 The shea tree grows naturally in the wild in the dry savannah belt of West and South from Senegal in the west to Sudan and South Sudan in the east, and onto the foothills of the Ethiopian highlands. It occurs in 19 countries across the African continent, namely Benin, Burkina Faso, Cameroon, Central African Republic, Chad, Ethiopia, Ghana, Guinea Bissau, Ivory Coast, Mali, Niger, Nigeria, Senegal, Sierra Leone, South Sudan, Sudan, Togo, Uganda, Democratic Republic of the Congo, and Guinea. The habitat area in total spans as wide as 5,000 square kilometres.

A testa found at the site of the medieval village of Saouga is evidence of shea butter production by the 14th century.

Shea butter has many uses and may or may not be refined. In the West it is most commonly used as an emollient in cosmetics and is less commonly used in food. Throughout Africa it is used extensively for food, is a major source of dietary fat, and for medicinal purposes. In Ghana and Nigeria, shea butter is a major ingredient for making the African black soap. 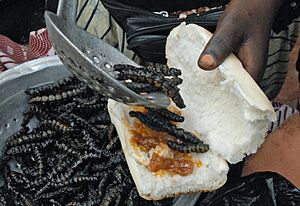 Preparing a sandwich with fried shea tree caterpillars at the Boromo bus station in Burkina Faso.

The edible protein-rich caterpillars of the moth Cirina butyrospermi which feed solely on its leaves are widely collected and eaten raw, dried or fried.

The common name is shíyiri (in N'Ko: ߛ߭ߌ߭ߦߌߙߌ‎) or shísu (ߛ߭ߌ߭ߛߎ‎, lit. "shea tree") in the Bambara language of Mali. This is the origin of the English word, whose primary pronunciation is (rhyming with "tea"), although the pronunciation (rhyming with "day") is common and is listed second in major dictionaries. The tree is called ghariti in the Wolof language of Senegal, which is the origin of the French name of the tree and the butter, karité.

In Hausa language the tree is called Kade or Kadanya. Indeed, the shea tree is so indispensable in Mole-Dagbang culinary and ethno-botanical practices that the Northern Ghanaian city of Tamale etymologically derives its name from the more traditional Dagomba name 'Tama-yile' (meaning 'Home of Shea nuts').

The tree was formerly classified in the genus Butyrospermum, meaning "butter seed". The species name parkii honors Scottish explorer Mungo Park, who learned of the tree while exploring Senegal. Park's Scottish origin is reflected in the English word shea, with a final -ea.

All content from Kiddle encyclopedia articles (including the article images and facts) can be freely used under Attribution-ShareAlike license, unless stated otherwise. Cite this article:
Vitellaria Facts for Kids. Kiddle Encyclopedia.