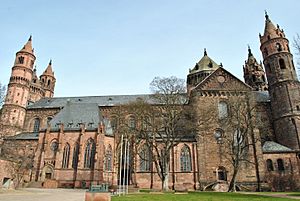 The south side of Worms Cathedral

The Cathedral of St Peter (German: Wormser Dom) is a church in Worms, southern Germany. It was the seat of the Catholic Bishopric (diocese) of Worms before it broke up in 1800. Today, the former cathedral is a Catholic parish church and "basilica minor". Worms Cathedral is where Martin Luther presented his theses on reforms to church authorities.

The cathedral has three bells, all of which are housed in the southeast tower. They were cast in 1947 by Albert Junker to replace the old sound of the four bells destroyed in World War II.

All content from Kiddle encyclopedia articles (including the article images and facts) can be freely used under Attribution-ShareAlike license, unless stated otherwise. Cite this article:
Worms Cathedral Facts for Kids. Kiddle Encyclopedia.