The 2008 UEFA Cup Final was the 37th final of the UEFA Cup. It is UEFA's second tier club football tournament. The match was played at the City of Manchester Stadium. It is the home stadium of Manchester City F.C., in Manchester, England, at 20:45 CEST (19:45 local time) on 14 May 2008.

The match was played by Zenit St. Petersburg of Russia and Rangers of Scotland. It was called a battle of Rangers coaching staff, with ex-boss Dick Advocaat, currently the manager of Zenit against current boss Walter Smith. Smith has had two times as manager of Rangers. Both coaches led the Rangers to the Scottish domestic treble; Smith in 1993 and Advocaat in 1999.

Zenit won the match 2–0. They had goals from Igor Denisov and Konstantin Zyryanov. It was their first UEFA Cup title. It made them only the second Russian side to win the competition, after CSKA Moscow in 2004–05.

The logo of the final shows a picture of the City of Manchester Stadium, created by English artist Liam Spencer. It was first shown at a ceremony in the stadium on December 6.

Route to the final 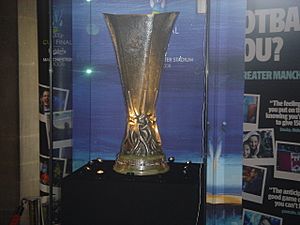 Zenit and Michel Platini asked the British government to ease visa procedures for Russian fans, despite Russia having cancelled visas for British fans travelling to 2008 UEFA Champions League Final in Moscow. However, the Director for British Visa Services for the CIS, Mandy Ivemy, said that "for the U.K. government, visas and biometric checks are a vital part of immigration policy, and we are not prepared to waive them".

Meanwhile, there was a mass flow of Rangers fans into Manchester. Over a hundred thousand supporters 'invaded' the city despite the club's official ticket allocation being just 13,000 and police requests for fans to stay at home. The influx of people resulted in there being no vacant hotel rooms in a twenty-mile radius of the city and the total amount of money that was ploughed into the local economy was estimated to be around £25 million.

Rangers' home ground, Ibrox, was opened to show a live beamback of the match to approximately 30,000 spectators. Fans queued overnight for a seat in the stadium. The capacity was reached more than two hours before kick-off.

Zenit St. Petersburg were without the competition's top scorer, Pavel Pogrebnyak, who had picked up two bookings in the knockout stages of the tournament and was therefore suspended. However, they were able to call upon their other star names such as attacking midfielders Andrei Arshavin and Konstantin Zyryanov, as well as holding midfielder Anatoliy Tymoschuk. 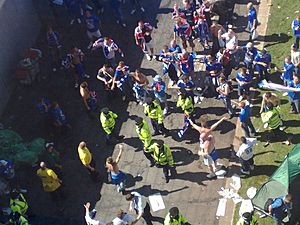 The event was marred by fans rioting in Manchester city centre; these riots started after a big screen that was due to show the match had failed. BBC News 24 interrupted normal programming to broadcast the riots live on television. ITN's flagship News at Ten programme gave a lot of coverage to the riots.

All content from Kiddle encyclopedia articles (including the article images and facts) can be freely used under Attribution-ShareAlike license, unless stated otherwise. Cite this article:
2008 UEFA Cup Final Facts for Kids. Kiddle Encyclopedia.