Aberdyfi also known as Aberdovey is both a village and a community in Gwynedd, Wales, located on the northern side of the River Dyfi estuary.

The village was founded around the harbour and shipbuilding industry, but is now best known as a seaside resort with a high quality beach. The centre is on the river and seafront, around the original harbour, jetty and beach; it stretches back from the coast and up the steep hillside in the midst of typical Welsh coastal scenery of steep green hills and sheep farms. Penhelig railway station (Welsh: Penhelyg) is in the eastern part of Aberdyfi.

Being less than 100 miles (160 km) from the West Midlands, Aberdyfi is popular with tourists. A relatively large proportion of houses in the village are now holiday homes. The town is located within the Snowdonia National Park. In the 2011 census, 38.5% of the population of Aberdyfi ward identified themselves as Welsh (or combined). 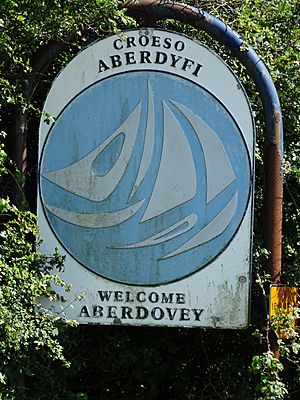 Bilingual welcome sign, using both the Welsh and anglicised spellings, on the approach to the village.

The anglicised spelling for the village and community is Aberdovey. The Welsh Aberdyfi is now widely used locally and by the Gwynedd Council and the Welsh Government. The body responsible for providing advice on the standard forms of Welsh place-names, the Welsh Language Commissioner, recommends Aberdyfi to be the standard form for use in both English and Welsh. Some entities continue to use the anglicisation e.g. in their name and/or address and some use the two spellings interchangeably. 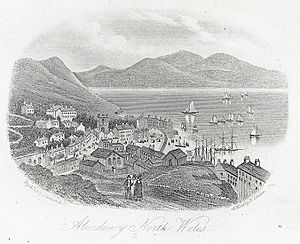 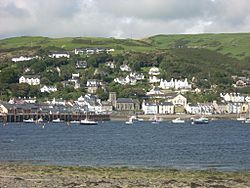 Aberdyfi from across the river.

Local tradition suggests that the Romans established a track into Aberdyfi as part of the military occupation of Wales around AD78.

The strategic location in mid-Wales was the site of several conferences between north and south Wales princes in 540, 1140, and for the Council of Aberdyfi in 1216. The hill in the centre of Aberdyfi, Pen-y-Bryn, has been claimed to be the site of fortifications in the 1150s, which were soon destroyed. The site of Aberdyfi Castle however is usually said to be at the motte earthworks further up the river near Glandyfi.

During the Spanish Armada of 1597, a Spanish ship, the Bear of Amsterdam missed her objective at Milford Haven and ended up having entered the Dyfi estuary. She was unable to leave for 10 days because of the wind and could not be boarded as no suitable boats were available. An attempt to burn her was frustrated by winds and when she did leave she ended up being captured by a waiting English fleet off the Cornish coast.

In the 1700s, the village grew with the appearance of several of the inns still in current use (The Dovey Hotel, Britannia and Penhelig Arms). Copper was mined in the present Copperhill Street, and lead in Penhelig. 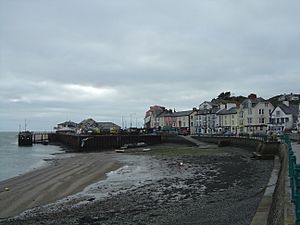 An electoral ward of the same name stretches inland along the A494 road and includes Pennal community. The total population of the ward taken at the 2011 census was 1,282.

In the 1800s, Aberdyfi was at its peak as a port. Major exports were slate and oak bark. Ship building was based in seven shipyards in Penhelig where 45 sailing ships were built between 1840 and 1880.

The railway came to Aberdyfi in 1863 built by the Aberystwith and Welsh Coast Railway. The first train was ferried across the river, as the line to Dovey Junction and then Machynlleth was not completed until 1867. Due to public demand, this section had to use a long tunnel behind Aberdyfi, and further major earthworks and tunnels were needed along the bank of the river. This line, which became part of the Cambrian Railways, and later the Great Western Railway, is particularly scenic.

A jetty was built in 1887, with railway lines connecting it with the wharf and the main line. The Aberdyfi & Waterford Steamship Company imported livestock from Ireland which were then taken further by the railway. Coal, limestone and timber were also imported. 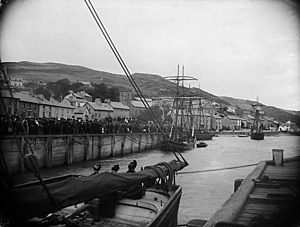 Crowds on shore at Aberdyfi watching the regatta, circa 1885 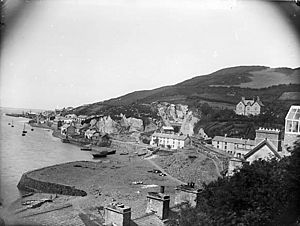 A view of Aberdyfi from Penhelyg Rock, circa 1885

Local coastal shipping links with Liverpool were strong, with many Aberdyfi men sailing on international voyages from Liverpool. The S.S. Dora was one of the last ships trading between Aberdyfi and Liverpool and was scuttled, with no loss of life, by a German submarine in 1917.

The jetty and wharf continued in commercial use for coal until 1959. After prolonged negotiations, redevelopments from 1968 to 1971, including rebuilding the jetty, led to their present use mainly for recreational purposes. Some local fishing still occurs.

The first ever Outward Bound centre was opened in Aberdyfi in 1941. Many of their activities involve the river, boats and jetty.

The first Aberdyfi lifeboat was bought in 1837. Run by the RNLI since 1853, it has taken part in many rescues, sometimes with loss of life of crew members. The current lifeboat, an Atlantic 75, is housed in the boathouse by the jetty and is launched using a lifeboat tractor. Currently it is averaging about 25 emergency launches each year.

Road access to Aberdyfi is by the A493, with Tywyn four miles to the north and Machynlleth 11 miles to the east. Aberdyfi is on the Cambrian Coast railway line. The village of Aberdyfi has two railway stations, Aberdovey and Penhelig. Trains on the Cambrian Line are operated by Transport for Wales. The local bus service is operated by Lloyds Coaches with services to Tywyn, where a connection can be made for Dolgellau, and to Machynlleth, where connections are available to Aberystwyth.

A ferry used to operate across the River Dyfi to Ynyslas. The last ferryman was Ellis Williams.

Popular recreational activities focus on the beach and watersports, such as windsurfing, kitesurfing, fishing, crabbing, sailing, and canoeing on the estuary.

The Dovey Yacht Club has a prominent position on the river front of the village. It was founded in 1949 and helped develop the popularity of the GP14 dinghy class. It organises races for dinghies throughout the season on the estuary of the River Dyfi.

The Aberdovey Golf Club, founded in 1892, is a famous 18 hole links course located near the railway station. It is world-renowned, having been described frequently and lyrically in the press by Bernard Darwin, the famed golf writer, who was a notable member of the club. In 1895, it was the location of the first Welsh Golfing Union Championship. Current members include Ian Woosnam and Peter Baker.

Located by the Aberdovey Golf Club is Aberdyfi Football club boasting one of the best football pitches in Mid-Wales. The football team won the Welsh Amateur Cup Competition in 1934.

The Aberdyfi Rowing Club rows in the Dyfi Estuary and Cardigan Bay and takes part in races all round the coast of Wales and internationally. They row 24’ long Celtic longboats, with four rowers (each with one oar) and a cox. They have three of these traditional Welsh boats with fixed seats and use these for races in Wales.

The Aberdovey Literary Institute, founded in 1882, is situated on the river front. The deeds of 1923 state it was established in perpetuity as "a non-sectarian, non-political place of recreation, education and social intercourse including ... reading rooms, writing rooms, library, billiard rooms, concert rooms ..."

Neuadd Dyfi is a community hall, conference centre and theatre owned by the village for village activities. It caters for a range of local organisations and events.

All content from Kiddle encyclopedia articles (including the article images and facts) can be freely used under Attribution-ShareAlike license, unless stated otherwise. Cite this article:
Aberdyfi Facts for Kids. Kiddle Encyclopedia.