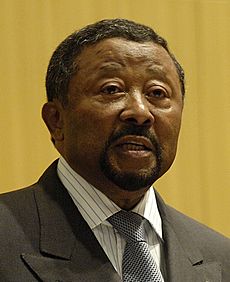 Afro-Asians or African-Asians (also known as Black Asians or Blasians), are persons of mixed Asian and African ancestry. Historically, Afro-Asian populations have been marginalised as a result of human migration and social conflict. The term Black Asian may also be used to describe Negritos (blacks indigenous to Asia); therefore Afro-Asian is a more scientifically proper term to describe Black Asians with direct African background or ancestry.

Ethiopians went to South Arabia in the 2nd century and the 4th century. By 532 AD they had invaded Yemen. After this, many more Africans came to South Arabia as slaves; men were usually traded, and the women were kept as servants for the Arab leaders. Mixed-race children were more valuable in South Arabia. Two such children became Princes of the Abbassids. At this time, the Arabian army, known as the Sabaens, moved to Ethiopia. In Iraq, Bantu-speaking Africans were called Zanj. The large number of Zanj slaves working in bad conditions in Iraq lead to the famous Zanj Rebellion over fifteen years (869-883 AD). African rebels took over many of Iraq's cities forcing Arabs to flee to African nations such as Kenya, Somalia, and Tanzania. Today someone of African and Arab descent is considered Afro-Arab.

A former slave by the name of Najah seized power in the 10th century and established the Banu Najah dynasty, the first royal Afro-Asian family.

As early as 1100 AD, African slaves were brought to India by Arab merchants in medieval times from the Bantu-speaking parts of eastern Africa. These Africans became known as Siddi or Habshi, Arabic word meaning Black African. Today, marriage has made the Siddi population in India much smaller. Someone of Indian and African background is considered an Indo-African. In South Asia there are over 15,000 individuals who identify as Afro-Asian.

In 1882, the Chinese Exclusion Act was passed and Chinese workers who chose to stay in the U.S. could no longer be with their wives who stayed behind in China. Because White Americans looked at Chinese labor workers as stealing jobs, they were treated badly. Many Chinese men settled in black communities and in turn married black women.

In the 1860s, Chinese people were imported for labor and trade. It became more common for a Chinese man to marry a black woman since there was more black women than Chinese women. According to the 1946 Census, 12,394 Chinese were located between Jamaica and Trinidad. 5,515 of those who lived in Jamaica were Chinese Jamaican and another 3,673 were Chinese-Trinidadians living in Trinidad. In Guyana and Haiti, there is also a very small percentage within the minority who are of Asian descent.

Haitian painter Edouard Wah was born to a Chinese father and Haitian mother.

The UK has a large mixed-race population, which is about 1.4% of the population (or around 850,000 people). The largest groups are mixed Whites and Black, and mixed Whites and Asians. However, there are over 70,000 UK citizens that are mixed race and do not fit the above descriptions, a large percentage of these are Afro-Asian. Famous Afro-Asian Britons include Naomi Campbell, David Jordan.

All content from Kiddle encyclopedia articles (including the article images and facts) can be freely used under Attribution-ShareAlike license, unless stated otherwise. Cite this article:
Afro-Asian Facts for Kids. Kiddle Encyclopedia.