Hines E. Ward, Jr. (born March 8, 1976) is a former American football wide receiver in the National Football League (NFL). He played for the Pittsburgh Steelers for fourteen seasons after being drafted in the third round of the 1998 NFL Draft, becoming the team's all-time leader in receptions, receiving yardage and touchdown receptions. Ward was voted MVP of Super Bowl XL, and upon retirement was one of only eight NFL players to have 1,000 or more career receptions. He played college football at the University of Georgia.

Ward played college football for the University of Georgia Bulldogs from 1994 to 1997. Ward's 149 career catches for 1,965 yards placed him second in team history. He also played tailback and totaled 3,870 all-purpose yards, second only to Herschel Walker in Bulldogs history, and even played some quarterback. Ward wore #19 in college. 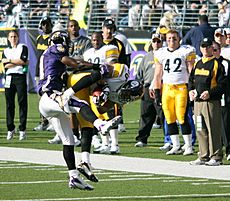 Ward makes a catch against the rival Baltimore Ravens in 2006.

Ward won the Super Bowl twice in Pittsburgh. He was even the MVP of Super Bowl XL, in which Ward caught a touchdown from fellow wideout Antwaan Randle El. Ward is known for, not only his great receiving skills, but his hard blocks (some call them illegal, Ward was even voted the "NFL's Dirtiest Player") and signature toothy smile. In fourteen seasons with the Pittsburgh Steelers, Ward also became their all-time leading receiver. Ward also served as a mentor to several younger Steelers wideouts, including Mike Wallace, Antonio Brown, and Santonio Holmes. Ward's play became worse late in his career, and so he was released by the Steelers before retiring.

Ward was born in Seoul, South Korea, but grew up in the Atlanta, Georgia, USA area. He made an appearance on Dancing with the Stars with Kym Johnson, even winning.

All content from Kiddle encyclopedia articles (including the article images and facts) can be freely used under Attribution-ShareAlike license, unless stated otherwise. Cite this article:
Hines Ward Facts for Kids. Kiddle Encyclopedia.