Andover is a town in Oxford County, Maine, United States. The population was 752 at the 2020 census. Set among mountains and crossed by the Appalachian Trail, Andover was home to the Andover Earth Station (now demolished) and Lovejoy Covered Bridge (extant).

The land which became known as Andover was originally purchased in 1788 by a group of proprietors mostly from Andover, Massachusetts. The original proprietors were Thomas Poor of Methuen, Massachusetts; Jonathan Abbot, Benjamin Poor, Ebenezer Adams, Ingalls Bragg, Theodore Stevens, Samuel Farnum, Philip Abbott, Samuel Johnson, Abiel Lovejoy, and Eben Poor, Jr. all of Andover, Massachusetts; Joseph Frye of Fryeburg, Maine; and John York, Ezekiel Merrill, and Josiah Bean of Bethel, Maine. The town was first settled in 1789 by Ezekiel Merrill and his family who were transported there from Bethel, Maine in canoes managed by members of the local Pequawket tribe. The first saw-mill was built on the East Branch of the Ellis River by Col. Thomas Poor in 1791 and was used to provide the lumber for the still standing Merrill-Poor House.

The town was incorporated on June 23, 1804 as East Andover, and then renamed Andover in 1820 when Maine separated from Massachusetts.

Early occupations included agriculture and lumbering. As the town developed, factories made doors, sash, blinds, starch, cheese, boots and shoes, edge-tools, carriages and harness. It also had a tannery. Located on an intervale surrounded by mountains, Andover was noted for "its grand and beautiful scenery," with streams abounding in trout. After the Civil War, the town became a popular destination for sportsmen, especially fishermen attracted by the nearby Richardson Lakes. A hotel was built to accommodate the influx of tourists.

In 1960, Andover was selected to be site of the Andover Earth Station, completed in 1962. It was the location of the first live transatlantic television signal broadcast by satellite Telstar 1.

According to the United States Census Bureau, the town has a total area of 57.46 square miles (148.82 km2), of which, 57.42 square miles (148.72 km2) of it is land and 0.04 square miles (0.10 km2) is water. Crossed by the Appalachian Trail, Andover is drained by the Ellis River, a tributary of the Androscoggin River. The river is home to many fish and wildlife from which avid hunters and fisherman would try their luck.

This climatic region is typified by large seasonal temperature differences, with warm to hot (and often humid) summers and cold (sometimes severely cold) winters. According to the Köppen Climate Classification system, Andover has a humid continental climate, abbreviated "Dfb" on climate maps.

There were 385 households, of which 20.5% had children under the age of 18 living with them, 52.5% were married couples living together, 7.8% had a female householder with no husband present, 5.5% had a male householder with no wife present, and 34.3% were non-families. 28.3% of all households were made up of individuals, and 12.7% had someone living alone who was 65 years of age or older. The average household size was 2.13 and the average family size was 2.57. 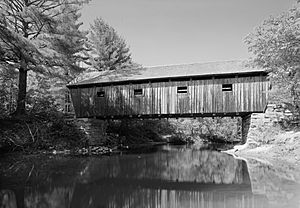 All content from Kiddle encyclopedia articles (including the article images and facts) can be freely used under Attribution-ShareAlike license, unless stated otherwise. Cite this article:
Andover, Maine Facts for Kids. Kiddle Encyclopedia.