Argentan is a French city in the Orne department, in Lower Normandy. 17 327 people live there. The size is 1,818 hectares (7.02 sq mi). The river Orne flows through Argentan. The forests of Gouffern and Ecouves are nearby.

Argentan was built at the beginning of the 12th century by Henry II. Henry was a Normandy duke and also the king of England. 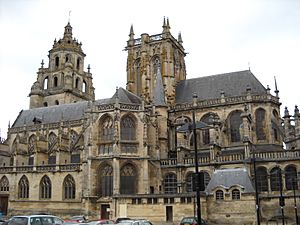 All content from Kiddle encyclopedia articles (including the article images and facts) can be freely used under Attribution-ShareAlike license, unless stated otherwise. Cite this article:
Argentan Facts for Kids. Kiddle Encyclopedia.