Arjun Kapoor (born 26 June 1985) is an Indian film actor who appears in Hindi films. The son of film producers Boney Kapoor and Mona Shourie Kapoor, and a half-brother to actress Janhvi Kapoor, he initially worked as an associate producer on his father's productions No Entry (2005) and Wanted (2009), before making his acting debut with the 2012 action romance Ishaqzaade and subsequently appeared in several films, including the crime drama Gunday (2014), the coming-of-age romantic comedy 2 States (2014), the English road comedy Finding Fanny (2014), and the satire Ki & Ka (2016).

Kapoor was born in a Punjabi family on 26 June 1985 in Mumbai, Maharashtra, to film producer Boney Kapoor and the entrepreneur Mona Shourie Kapoor. He is the grandson of filmmaker Surinder Kapoor. He is the nephew of actors Anil Kapoor, Sanjay Kapoor and producer Sandeep Marwah, and the first-cousin of actress Sonam Kapoor, actors Mohit Marwah, Harshvardhan Kapoor and producer Rhea Kapoor. He has a younger sister, Anshula Kapoor. Actress Sridevi was his stepmother, and he also has two half-sisters, Khushi and Janhvi Kapoor. He was 11 when his father separated from his mother.

When asked in an interview about his father's second marriage, Kapoor said: "When we were kids, it was difficult. But what can you do? How long will you complain? You have to accept what is, take it on your chin, and move on." He added, "We don't really meet and spend time together so it doesn't really exist". His mother died in 2012. However, after Sridevi died in 2018, his relationship with his half-sisters Khushi and Jahnvi improved. Kapoor also opened up on the bullying he faced post Boney's marriage with Sridevi.

His maternal grandmother, Sattee Shourie, who was a great support to him, also died in 2016.

Kapoor was educated at the Arya Vidya Mandir school in Mumbai, which he attended till his 11th grade. After failing his eleventh grade examinations, he quit his studies. In his teens and early twenties, Kapoor suffered from obesity and approximately weighed 140 kg; he later said that due to his condition, he used to be "sloppy, grumpy" and "under-confident".

Kapoor was first dating Arpita Khan, the adopted sister of Salman Khan, long before his Bollywood debut. Kapoor is currently in a relationship with actress Malaika Arora since 2016. Kapoor is a keen football fan and an avid supporter of Chelsea F.C. while also being the club's brand ambassador for India. 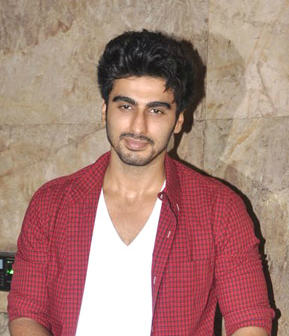 Kapoor's first job in the film industry was as an assistant director on Nikhil Advani's Kal Ho Naa Ho in 2003. He also assisted Advani on his next directorial Salaam-e-Ishq: A Tribute to Love (2007), and worked as an associate producer on two of his father's productions—No Entry (2005) and Wanted (2009). Kapoor was then signed on for a three-film contract with Yash Raj Films, a leading production company in India.

In 2011, it was announced that Kapoor will debut with a film named Virus Diwan, produced under Yash Raj Films, which was shelved after sometime. Later, he signed on to debut with the company's romantic drama Ishaqzaade (2012) alongside Parineeti Chopra, which tells the love story between a son and daughter of a Hindu and Muslim political family, respectively. While filming a running sequence for the feature in Barabanki, Kapoor suffered a spasm in his hamstring muscle, though he finished the scene after resting for five minutes. Ishaqzaade became a profitable venture, earning

670 million (US$11 million) worldwide, and his performance was praised, winning Kapoor a Zee Cine Award for Best Male Debut.

Yash Raj Films' next project to star Kapoor was the action thriller Aurangzeb (2013) whose title matches the name of a Mughal emperor of the same name. Marking the directorial debut of Atul Sabharwal, it co-starred Jackie Shroff, Rishi Kapoor and Amrita Singh; he portrayed two estranged twin brothers, Ajay and Vishal, who end up in each other's places as part of a huge conspiracy to overthrow their biological father's empire. Critic Rachna Saltz from The New York Times said of Kapoor that he is a "star of an earlier generation" and is "well-cast and matched". However, the film underperformed at the box office. Arjun will be seen in a Hindi remake of the Tamil film Comali.

For his first film in 2014, Kapoor teamed with Yash Raj Films for the third consecutive time on Gunday, a crime action film also starring Ranveer Singh and Priyanka Chopra. Directed by Ali Abbas Zafar, it saw him and Singh portray two bandits with bold attitude, in love with a dancer (Chopra). He described his character as "temperamental" who acts as a "moment's heat". Film analyst Anupama Chopra mentioned the film as an "unabashed love letter to the 1970s". Gunday proved to be a commercial success, and accumulated over

As his three-film deal with Yash Raj Films concluded, Kapoor next collaborated with the producers Sajid Nadiadwala and Karan Johar to star opposite Alia Bhatt in a film adaptation of Chetan Bhagat's popular novel 2 States, released with the same title. He played Krish Malhotra, an IIM Ahmedabad MBA student wanting to become a writer. Saurabh Dwivedi stated that Kapoor "shows his pain through body language but falls short in some scenes opposite his co-actor Ronit Roy". The project was well appreciated, garnering critical acclaim, and earned more than

1.02 billion (US$17 million) in India to emerge as his biggest commercial success so far. He received an IIFA Award for Best Actor nomination. His last release of 2014 was the Homi Adajania's adventurous satire Finding Fanny, which follows the lives of five dysfunctional people in search of a titular woman.

In 2015, Kapoor featured in his father's second younger brother Sanjay's first production Tevar, a remake of the Telugu film Okkadu (2003), in which he co-starred alongside Sonakshi Sinha and Manoj Bajpayee as a Kabaddi player. He was director Amit Sharma's only choice to play the role. Upon release, the film was poorly received and failed both critically and commercially.

The following year, Kapoor served as the host for the seventh season of Colors TV's reality stunts-performing series Fear Factor: Khatron Ke Khiladi. In the same year, he starred opposite Kareena Kapoor Khan in R. Balki's satirical comedy-drama Ki & Ka, based on the content of gender stereotypes. Kapoor portrayed the male lead Kabir Bansal, a stay-at-home husband. Writing for India Today, Ananya Bhattacharya gave the film a negative review and wrote that Kapoor"looks like a mouthing sharp". Nonetheless, the film was a modest critical success and became a commercial success grossing ₹1.03 billion

The Mohit Suri-directed, teen romantic drama Half Girlfriend became Kapoor's first film of 2017, which served as a retelling of Bhagat's novel of the same name. He was cast in the role of Madhav Jha, a basketball champion who hardly speaks English and ends up getting attracted towards a college girl (played by Shraddha Kapoor) when he joins a college. In an interview, Kapoor admitted that he signed the film despite not reading the novel. The film was a critical and commercial failure.

Later that year, Kapoor played twin brothers for the second time in Mubarakan, a comedy directed by Anees Bazmee, in which he starred alongside his uncle Anil. The film also featured Ileana D'Cruz and Athiya Shetty as the love interests of his characters. In her review, Saibal Chatterjee wrote that Kapoor "demonstrates a comic flair that is crying out for a better film".

In 2018, Kapoor starred in a spin-off to the romantic comedy Namastey London (2007), named Namaste England, helmed by Vipul Amrutlal Shah. He played a character that falls in love with an aspiring jewelry designer played by Parineeti Chopra, reuniting with the actress after Ishaqzaade. The film proved to be a major box office flop, and Saibal Chatterjee of NDTV concluded his scathing review of the film with a note stating, "Seriously, one more film of this quality and the careers of Arjun Kapoor and Parineeti Chopra could be in grave jeopardy. Hopefully, these two young actors know better".

2019 was yet another disappointing year in Kapoor's career, as the two films he starred in were commercial failures again. In his first release, the crime drama India's Most Wanted directed by Raj Kumar Gupta, he essayed the role of an agent who is given a secret mission of tracking a terrorist. His next screen appearance occurred in Ashutosh Gowarikar's period drama Panipat alongside Sanjay Dutt and Kriti Sanon. Based on the 3rd Panipat battle, it featured him as Maratha emperor Sadashiv Rao Bhau and depicted how Bhau fought the battle against the Afghan warrior Ahmed Shah Abdali.

As of March 2021, Kapoor is awaiting the release of Kaashvie Nair's Sardar Ka Grandson – in which he is paired opposite Rakul Preet Singh. He is currently filming the horror comedy film Bhoot Police co-starring Saif Ali Khan, Jacqueline Fernandez & Yami Gautam, and Mohit Suri's Ek Villain Returns with John Abraham, Disha Patani and Tara Sutaria. His 3-year delayed starrer Sandeep Aur Pinky Faraar, which is his third screen sharing with Parineeti Chopra, was released on 19 March.

Kapoor is a celebrity endorser for various brands and products, and was the co-owner of the ISL team FC Pune City. In 2014 and again in 2015, he supported and endorsed the Earth Hour initiative in India. During this time, he was the Indian ambassador for World Wide Fund for Nature (WWF) and along with working towards creating awareness for Earth Hour, he has also helped raise awareness for conservation in the Sundarbans region of the country. In 2015, he supported the United Nations Global Goals campaign represented India at the Global Citizen Festival in New York City, where he gave a speech highlighting India's progress as a nation and the challenges faced by the country. In 2017, Arjun joined hands with the global movement and campaign to empower and educate women - Girl Rising. Philips also roped him as the brand ambassador for its 'Male Grooming' business. He is also a brand ambassador for Flying Machine and Royal Stag along with Ranveer Singh. Kapoor co-hosted the IIFA Awards ceremony in 2015 with Singh. Arjun was also the brand ambassador for the world's leading bicycle manufacturer - Hero Cycles. He has also hosted the seventh season of the successful TV show Fear Factor: Khatron Ke Khiladi 7. As of 2017[update], he also endorses Smith & Jones ketchup, condiments and sauces, and Admiral England Sportswear & Sportshoes.

All content from Kiddle encyclopedia articles (including the article images and facts) can be freely used under Attribution-ShareAlike license, unless stated otherwise. Cite this article:
Arjun Kapoor Facts for Kids. Kiddle Encyclopedia.