Kids Encyclopedia Facts
Not to be confused with Ashurbanipal. 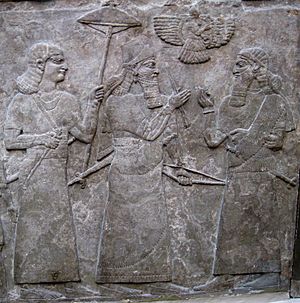 Ashur-nasir-pal II (transliteration: Aššur-nāṣir-apli, meaning "Ashur is guardian of the heir") was king of Assyria from 883 to 859 BC.

Ashurnasirpal II succeeded his father, Tukulti-Ninurta II, in 883 BC. During his reign he embarked on a vast program of expansion, first conquering the peoples to the north in Asia Minor as far as Nairi and exacting tribute from Phrygia, then invading Aram (modern Syria) conquering the Aramaeans and Neo-Hittites between the Khabur and the Euphrates Rivers. His harshness prompted a revolt that he crushed decisively in a pitched, two-day battle. According to his monument inscription, while recalling this massacre he says:

Following this victory, he advanced without opposition as far as the Mediterranean and exacted tribute from Phoenicia. On his return home, he moved his capital to the city of Kalhu (Nimrud).

All content from Kiddle encyclopedia articles (including the article images and facts) can be freely used under Attribution-ShareAlike license, unless stated otherwise. Cite this article:
Ashurnasirpal II Facts for Kids. Kiddle Encyclopedia.