Attila the Hun facts for kids 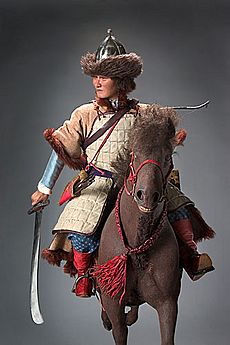 Attila led the Hunnic Empire, and was known as a feared military commander. He invaded Gaul, and nearly captured the city of Aurelianum. In 451 CE, he lost the Battle of the Catalaunian Plains, the only one he ever lost. He also invaded Italy and attacked and looted several towns.

Attila died in 453. The traditional account of his death is that it happened the night after his marriage to a woman named Ildiko. The Huns declined in the years immediately after Attila's death.

All content from Kiddle encyclopedia articles (including the article images and facts) can be freely used under Attribution-ShareAlike license, unless stated otherwise. Cite this article:
Attila the Hun Facts for Kids. Kiddle Encyclopedia.