Banham Zoo is a 50-acre (20 ha) zoo in Banham, Norfolk, England. The zoo itself, which today is home to more than 2,000 animals, opened to the public in 1968, became a charity in 2013, and has since been often awarded the prize of Norfolk's Top Attraction, by numerous different organisations, with an annual visitor attendance of in excess of 200,000 people. It is part of the Zoological Society of East Anglia, a registered charity which also owns Africa Alive! near Lowestoft, Suffolk.

Banham Zoo began as a collection of pheasants and parrots, and opened to the public in the year 1968. In the year 1971, it acquired a colony of woolly monkeys and became the "Banham Zoo and Woolly Monkey Sanctuary". Today, it has acquired a much larger collection of animals, but it still retains one of the best collections of smaller monkeys in Europe 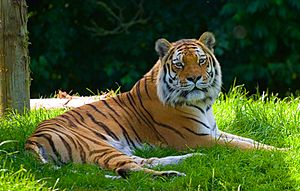 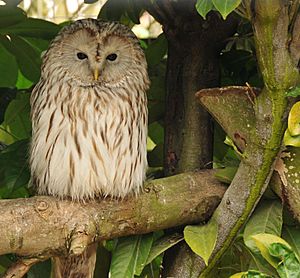 The Province of the Snow Cat is an exhibit that opened in the year 2009 for the zoo's breeding pair of snow leopards. It features rock-faces and a meandering stream. Three cubs were born here in 2010.

The Giraffe House was built and opened as a celebration of the zoo's 40th anniversary. Since its opening in 2008, there have been several successful giraffe births.

The Bird Garden is a short walk on a meandering path. It features several aviaries with other enclosures opposite. These feature different birds and smaller monkeys respectively. Such species include Von der Decken's hornbills, Swainson's lorikeets, Bali starlings, Geoffroy's marmosets, cotton-top tamarins, and golden-headed lion tamarins.

Lemur Encounters was opened in late 2011 and features two lemur species in a large enclosure. The public can walk around this exhibit and expect to see red ruffed and ring-tailed lemurs making use of their large open space.

All content from Kiddle encyclopedia articles (including the article images and facts) can be freely used under Attribution-ShareAlike license, unless stated otherwise. Cite this article:
Banham Zoo Facts for Kids. Kiddle Encyclopedia.