The Big N’ Tasty is a hamburger sold by the international fast food chain McDonald's. It is designed to compete with the Whopper sandwich. A similar variation called the Big Tasty, without the center "N'", which was first released in Saudi Arabia, is sold outside the United States in parts of Europe, South America, South Africa, The Middle East, and Taiwan.

The Big Tasty Bacon variant also contains strips of streaky bacon. This variant is not available in the U.S., only internationally. 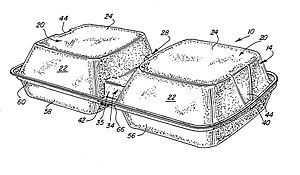 Depiction of the McDLT packaging from its patent application

The Big N' Tasty is the latest in a series of burgers that were designed to compete against the Whopper from Burger King. The first sandwich in this line of products was the McDLT, launched in 1984. It was sold in a novel form of packaging where the meat and bottom bun was prepared separately from the lettuce, tomato, cheese, pickles, sauces, and top bun and both were then packaged into a specially designed two-sided container. The consumer was then expected to finalize preparation of it by combining the "hot" and "cool" sides just before eating. The company discontinued it between December 1990 and January 1991 to appear more environmentally friendly as it moved away from polystyrene packaging which was integral to the McDLT "experience".

The McDLT was eventually succeeded by the McLean Deluxe in 1991. This was a lower fat burger that included carrageenan to replace the beef fat in the patty, and was served without mayonnaise. While it tested well, it failed to catch on after the national roll-out and was discontinued in February 1996 in favor of the new Arch Deluxe, an adult oriented burger that featured a higher quality roll and a dijon mustard based mayonnaise. It was also unsuccessful and was discontinued in 1998.

The Big N' Tasty was first test marketed under a different name in a limited number of McDonald's restaurants in Sweden during the summer of 2003, followed by a national release during the autumn with the current name. In the UK, it launched in December 2003 with the advertising slogan "Sorry, America, but the Big Tasty is only for us Brits. I'm lovin' it. Sorry you're not". It was phased out of all restaurants in August 2005 as part of the menu clear up that made way for the launch of the Deli Sandwiches. It was reintroduced to the UK menu as part of the limited time offer program in the Autumn of 2006. It was again introduced to the menu in the summers of 2007, 2008, and continues to do so as a promotional item, generally during winter and summer when other food events (such as the World Cup or the company's popular Monopoly promotion) are not running. The Big Tasty returned in January 2013 as part of the January food promotion. It was recently removed in Denmark and in the Netherlands for unknown reasons; it was reintroduced in the Netherlands on 2 April, 2012. It is still available at all McDonald's restaurants in Latvia, Norway, Greece and the majority of the restaurants in Sweden. The Big N' Tasty was also introduced to the Philippine market.

All content from Kiddle encyclopedia articles (including the article images and facts) can be freely used under Attribution-ShareAlike license, unless stated otherwise. Cite this article:
Big N' Tasty Facts for Kids. Kiddle Encyclopedia.