Borough of Waverley facts for kids

The Borough of Waverley is a local government district with borough status in Surrey, England. The borough's headquarters are in the town of Godalming, with Farnham (2001 Census Pop. 37,055) and Haslemere (2011 Census Pop. 16,826) being the other large notable towns.

Waverley neighbours the boroughs of Guildford and Mole Valley in Surrey, and the counties of West Sussex and Hampshire. The borough is named after Waverley Abbey, near Farnham, the earliest Cistercian monastery in Britain. The borough in the north contains Blackheath Common an Area of Outstanding Natural Beauty.

Waverley is a Wealden (meaning wooded) borough, bounded to the north by the Hog's Back section of the North Downs and by the Greensand Ridge. It has the most green space in absolute terms in Surrey at 293.1 km² according to the central government-compiled Generalised Land Use database of January 2005, approximately half of which is woodland.

Much of the west of the borough echoes former ownership by the abbey, such as Waverley Cricket Club and the Waverley Arms pubs in Farnham and elsewhere. Equally echoed are the tens of square miles held under Farnham holding of the Bishop of Winchester which took in the western parishes of Frensham and Churt as well as much of Farnham parish since the early 12th century when one such Bishop, Henry of Winchester and of Blois established Farnham Castle as the See's episcopal home but which is today the borough's main surviving castle and a museum to the period.

A Legatum Prosperity Index published by the Legatum Institute in October 2016 showed Waverley as the most prosperous council area in the United Kingdom. 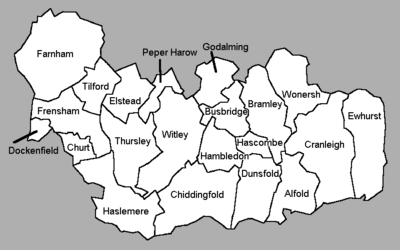 All content from Kiddle encyclopedia articles (including the article images and facts) can be freely used under Attribution-ShareAlike license, unless stated otherwise. Cite this article:
Borough of Waverley Facts for Kids. Kiddle Encyclopedia.