Bradford Island is a 2,172-acre (879 ha) island of the Sacramento–San Joaquin River Delta, in Contra Costa County, California, United States. Bradford Island is inaccessible by roads, and is served by a ferry across the False River from nearby Jersey Island. Approximately 48 people live on the island; other uses of land include wheat farming, cattle grazing, and natural gas extraction.

Bradford Island is a reclaimed peat wetland; as it lies below sea level, it is protected by flooding by levees. These, as well as a pump station and internal drainage canals, are administered by Reclamation District 2059, founded in 1921. The levees have been breached on several occasions, leading to the island becoming flooded. Bradford Island is one of eight Delta islands considered "critical" to the region's water quality by the California Department of Water Resources. 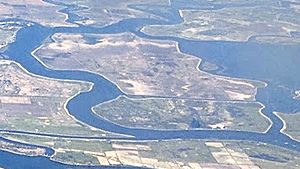 Webb Tract (above) and Bradford Island (below) in an aerial photo taken looking toward the east in 2018.

The islands of the Sacramento–San Joaquin River Delta prevent saltwater intrusion in the Delta; while freshwater flows into the region from the Sacramento and San Joaquin rivers, so does saltwater from the Pacific Ocean through San Francisco Bay. Islands in the Delta reduce the flow of this saltwater, and Bradford Island is one of eight Delta islands considered "critical" to the region's water quality by the California Department of Water Resources. It is below sea level, and protected from flooding by levees. In 1981, the United States Geological Survey gave its elevation as 0 ft (0 m), but in 2015, the Contra Costa County Local Agency Formation Commission gave its elevation as 5 to 15 feet (1.5 to 4.6 m) below sea level.

Ducks, cranes, swans and geese feed in the marshes of Bradford Island; Swainson's hawks, Cooper's hawks and red-tailed hawks have also been seen over the island. In December 2014, Reclamation District 2059's Board of Trustees approved a Project Funding Agreement for the removal and mitigation of Himalayan blackberry and other invasive weeds. 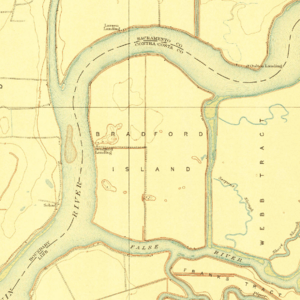 Bradford Island in a USGS survey map from 1910. Franks Tract (now submerged) can be seen to its southeast. 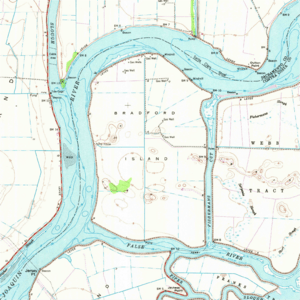 Bradford Island in a 1969 USGS survey map, with then-current elevations marked. Natural gas wells can be seen on the north half of the island.

In 1986, the decommissioned minesweeper USS Lucid was purchased by William Gardner, a scrap metal dealer, and brought to his residence on Bradford Island. Lucid, an oceangoing wooden ship that had seen use in the Vietnam War, was used as a floating warehouse. Gardner removed or sold everything of value from the ship, and used it as a storage building, cutting a hole in the hull on the port side near the waterline to use as a door. He was murdered over a property dispute in 2004. In 2005, his widow donated the ship to United States Navy veteran Mike Warren, whose "Save an MSO Foundation" began restoration by removing the large amount of scrap metal that had been stored in it and patching the hole. In 2011, the ship was moved to the Stockton Maritime Museum to be restored for use as a museum ship.

In 2010, a fire charred hundreds of acres of land and ignited peat vegetation. Bradford Island, at the time, had not been annexed to any Contra Costa County fire district; as a consequence, the fire was not suppressed, and it caused an estimated $675,000 (equivalent to $675 thousand in 2022) in property damage.

According to the 2000 US Census, the population of Bradford Island was 48. In 2009, the Contra Costa Times said that "roughly 100 people [called] the island home", and an article in the Silicon Valley Mercury News similarly quoted a spokesman for the Contra Costa County Sheriff as saying that "roughly 100" people lived on Bradford Island. However, the Contra Costa County Local Agency Formation Commission cites a 2009 population figure of "approximately 63" residents, and in 2010, FireFighting News said that "not much [had] changed since" the population of 48 recorded in the 2000 census. In 2013, the number of residents was given by Mercury News as 13, and in 2017 the island had 8 full-time residents. A 2020 newsletter from the Reclamation District gave its population as "approximately 48".

As of 2021[update], the District is responsible for maintaining 7.4 miles (11.9 km) of levees around the island, one pump station, and over seven miles (11 km) of internal drainage canals. It derives revenue primarily from state and federal levee subvention grants, ferry service fees, and property assessments, which landowners pay yearly in proportion to the amount of land they own. The ferry is administered as part of the Delta Ferry Authority, of which the District is a part; its $9,000/month operating cost is split between Bradford Island and the neighboring Webb Tract. The ferry, Victory II, costs $7.50 for a round trip, but landowners of record (people listed on the title of a piece of property) can obtain passes allowing them, as well as their domestic partners and family members, to take the ferry for free. The District has several part-time employees (a District Manager and Levee Superintendent), and several contract employees who carry out support services (a District Engineer and District Legal Counsel).

The District operates under an amended set of bylaws, adopted in May 2018, and is managed by a board of five Trustees elected from the island's landowners by a majority vote at the District's general election. Trustees serve staggered four-year terms, and regular meetings are held monthly. Prior to this, amended bylaws had been adopted by the Board and voted on by landowners in 2014 and 2006.

In 2008, the Board of Trustees determined that the Reclamation District lacked funds necessary for several maintenance tasks (including the ferry and a pump station replacement); in 2010, a majority vote approved a proposition to change assessment procedures. Whereas assessments had previously been made on an ad valorem basis, the proposition changed them to a "special benefit" basis, in which parcels' assessments were based on the amount of special benefit derived (according to the land use code). This proposition had a 5-year sunset clause, scheduled to expire in May 2015.

The Reclamation District has been the subject of controversy as well. In 2006, Paul Sosnowski (the island's majority landowner) successfully petitioned the district to expand its board from three to five members; he and his girlfriend were elected to the additional seats. They subsequently gifted one percent of a single parcel to a maintenance worker at Sosnowski's marina, Steve Lucas, who then became a landowner eligible for board membership; Sosnowski's ownership of large amounts of the island permitted him to cast thousands of votes (one per acre owned) and elect Lucas to the board. Sosnowski intended to use his absolute majority to develop various businesses on the island. In the summer of 2017, it was discovered that part of Sosnowski's land had been underwater, leaving him 3.6 acres (1.5 ha) short of majority ownership; he was removed from the board as a result. 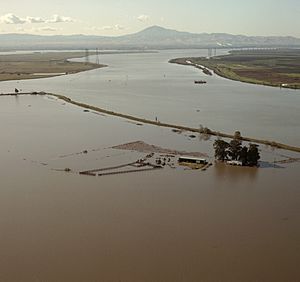 Aerial photograph of the southwest corner of Bradford Island, almost completely flooded in December 1983; the levee remains visible above the water

Levee maintenance is provided by the Reclamation District; the Contra Costa Local Agency Formation Commission estimated the annual cost at $2,500 per mile ($1,553 per kilometer) based on expenditures from fiscal year 2012–2013. The levees have experienced a number of breaches and failures, and the island has been flooded as a result on numerous occasions. On December 9, 1983, a storm caused a 600-foot (180 m) breach in the levees, flooding the island completely. Residents were evacuated by ferry, and most did not return. On August 27, 2009, additional levee damage occurred when a freighter, the 570-foot (170 m) Tasman Resolution, ran aground on the north side of the island. The accident occurred at 8:30 pm in calm, clear weather, causing 12 feet (3.7 m) of damage to the rock base and washing out a 150-foot (46 m) section of the levee. The damage required $800,000 (equivalent to $800 thousand in 2022) in repairs, performed by the Coast Guard). While 100 people were planned to be evacuated from the island the day after, deputies found only nine, of whom eight refused to leave – the single evacuee was taken by boat to nearby Bethel Island for the night.

In 2014, substantial improvements were made to the levee system, which included supplementing them with rip-rap, reinforcing back slopes, and raising the levee crowns. As of these improvements, seven miles of levees met or exceeded Hazard Mitigation Plan (HMP) standards, with 0.5 miles (0.80 km) along the northern boundary with the San Joaquin River needing rehabilitation. In July 2014, an emergency drought barrier was placed across the False River, and in August 2014, a levee improvement upgrade to meet the Federal Emergency Management Agency's 100-year flood protection standard was "fast approaching [its] conclusion". In 2015, a "Muscle Wall" was placed on the low spots of the island's levees "just in time" for a 4.43 foot (1.35 m) high tide on July 2, and work to remove the drought barrier began in September.

In 2015, during a District levee inspection, goats were found to be "running rampant" on the levee crown, slopes and neighboring properties, potentially contributing to levee erosion. As District policy forbids goats on the levees, landowners were encouraged to contact Bradford Reclamation District with any sightings of, or information in connection to, goats on the levees.

In August 2018, the reclamation district declared the island in a state of emergency due to seepage occurring on a 25-foot-wide (7.6 m) section of levee. Emergency repairs were conducted, in which holes were repaired with steel sheet piles in a "temporary fix" for an estimated cost of $200,000 (equivalent to $200 thousand in 2022).

All content from Kiddle encyclopedia articles (including the article images and facts) can be freely used under Attribution-ShareAlike license, unless stated otherwise. Cite this article:
Bradford Island Facts for Kids. Kiddle Encyclopedia.