Broken Arrow is a city located in the northeastern part of the U.S. state of Oklahoma, primarily in Tulsa County but also with a section of the city in western Wagoner County. It is the largest suburb of Tulsa. According to the 2010 census, Broken Arrow has a population of 98,850 residents and is the fourth-largest city in the state. However, a July 1, 2015, estimate reports that the population of the city is 106,563, making it the 280th-largest city in the United States. The city is part of the Tulsa Metropolitan Area, which has a population of 961,561 residents.

The Missouri–Kansas–Texas Railroad sold lots for the town site in 1902 and company secretary William S. Fears named it Broken Arrow. The city was named for a Creek community settled by Creek Indians who had been forced to relocate from Alabama to Oklahoma along the Trail of Tears.

Though Broken Arrow was originally an agricultural community, its current economy is diverse. The city has the third-largest concentration of manufacturers in the state.

The city's name comes from an old Creek community in Alabama. Members of that community were expelled from Alabama by the United States government, along the Trail of Tears in the 1830s. The Creek founded a new community in the Indian Territory, and named it after their old settlement in Alabama. The town's Creek name was Rekackv (pronounced thlee-Kawtch-kuh), meaning broken arrow. The new Creek settlement was located several miles south of present-day downtown Broken Arrow.

In 1902 the Missouri–Kansas–Texas Railroad planned a railroad through the area and was granted town site privileges along the route. They sold three of the as-yet-unnamed sites to the Arkansas Valley Town Site Company. William S. Fears, secretary of that company, was allowed to choose and name one of the locations. He selected a site about 18 miles (29 km) southeast of Tulsa and about five miles north of the thlee-Kawtch-kuh settlement and named the new town site Broken Arrow, after the Indian settlement. The MKT railroad, which was completed in 1903, ran through the middle of the city. It still exists today and is now owned by Union Pacific which currently uses it for freight.

For the first decades of Broken Arrow's history, the town's economy was based mainly on agriculture. The coal industry also played an important role, with several strip coal mines located near the city in the early 20th century. The city's newspaper, the Broken Arrow Ledger, started within a couple of years after the city's founding. Broken Arrow's first school was built in 1904. The city did not grow much during the first half of the 1900s. During this time Broken Arrow's main commercial center was along Main Street. Most of the city's churches were also located on or near Main Street as well. A 1907 government census listed Broken Arrow's population at 1383. 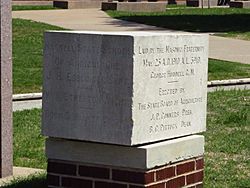 Only remnant of Haskell State School of Agriculture, built 1911, demolished 1987.

The Haskell State School of Agriculture opened in the Broken Arrow, Oklahoma Opera House on November 15, 1909. The school closed in 1917 for lack of funding, and the building was then used as Broken Arrow High School. The building was razed in 1987. Only a marker, shown here, remains at 808 East College Street in Broken Arrow. The front of cornerstone reads, "Haskell State School / Of Agriculture / J. H. Esslinger Supt. / W. A. Etherton Archt. / Bucy & Walker Contr." The side of cornerstone reads "Laid by the Masonic Fraternity / May 25, A. D. 1910, A. L. 5810. / George Huddell G. M. / Erected by The State Board of Agriculture / J. P. Conners Pres. / B. C. Pittuck Dean.". The school is commemorated on the National Register of Historic Places.

In the 1960s, Broken Arrow began to grow from a small town into a suburban city. The Broken Arrow Expressway (Oklahoma State Highway 51) was constructed in the mid-1960s and connected the city with downtown Tulsa, fueling growth in Broken Arrow. The population swelled from a little above 11,000 in 1970 to more than 50,000 in 1990, and then more than 74,000 by the year 2000. During this time, the city was more of a bedroom community. In recent years, city leaders have pushed for more economic development to help keep more Broken Arrowans working, shopping and relaxing in town rather than going to other cities.

Broken Arrow is located in the northeastern corner of Oklahoma. The city is part of the state's Green Country region known for its green vegetation, hills and lakes. Green Country is the most topographically diverse portion of the state with seven of Oklahoma's 11 eco-regions.

Broken Arrow has the typical eastern and central Oklahoma humid subtropical climate (Köppen Cfa) with uncomfortably hot summers and highly variable winters that can range from very warm to very cold depending on whether the air mass comes from warmed air over the Rocky Mountains or very cold polar anticyclones from Canada.

All content from Kiddle encyclopedia articles (including the article images and facts) can be freely used under Attribution-ShareAlike license, unless stated otherwise. Cite this article:
Broken Arrow, Oklahoma Facts for Kids. Kiddle Encyclopedia.