Bromborough is a large village within the Metropolitan Borough of Wirral, in Merseyside, England. It is situated on the Wirral Peninsula, to the south of Bebington and to the north of Eastham. In the 2001 Census, the population of the township was 12,630 (6,050 males, 6,580 females), although the total number of people within the larger Bromborough Ward was 13,963. By the time of the 2011 Census the population of the township was no longer collected although that of the Ward was shown as having increased to 14,850. Before local government reorganisation on 1 April 1974, it was part of the urban district of Bebington, within the county of Cheshire.

Bromborough is a contender for the site of an epic battle in the year 937, the Battle of Brunanburh, which confirmed England as an Anglo-Saxon kingdom. Reconstructed from fragments, an Anglo Saxon cross is in the churchyard of local parish church St Barnabas.

A charter for a market to be held each Monday was granted by Edward I in 1278 to the monks of St. Werburgh's Abbey. It was hoped that in establishing the market in the vicinity of Bromborough Cross would promote honest dealing. The market cross was the traditional centre of the village and also an assembly point for local farm labourers available for hire. The steps of the cross are from the original 13th-century monument. The cross itself is a more recent reproduction, presented to the town by the Bromborough Society.

With a watermill having been recorded at Bromborough at the time of the Domesday Survey, Bromborough watermill was likely to have been the oldest mill site on the Wirral. Located on the River Dibbin at what is known as Spital Dam, it was worked until 1940 and demolished in 1949. The site is now a children's nursery. A windmill, built in 1787, existed on higher ground also at the same location. Having fallen into disuse and much deteriorated, it was destroyed by gunpowder in about 1878.

An increase in traffic passing through the area resulted in Bromborough undergoing extensive redevelopment in the 1930s. Bromborough Hall, built in 1617, was demolished in 1932 to make way for a by-pass and a number of farmhouses and cottages in the area of Bromborough Cross were replaced with shops. 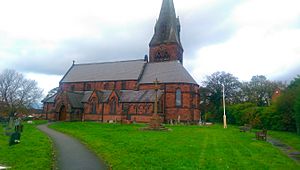 The boundary between the council wards of Bromborough and Eastham is Plymyard Avenue (just past Bettisfield Avenue), Moreland Avenue (where it merges into Raeburn Avenue), Bridle Road (at the point of Manor Road) and Eastham Rake (where Brookhurst Avenue ends).

To the west of the A41 New Chester Road, Bromborough is mainly residential development started in the 1930s, centred on the original village centre with its market cross.

There are a number of pubs in Bromborough: 'The Bromborough,' the 'Royal Oak' and the local British Legion, now known as the Bromborough Social Club are situated in Bromborough Village. The Archers pub has closed down and planning permission submitted for it to be demolished. On the outskirts, bordering Eastham, are the 'Merebrook' and the 'Dibbinsdale', where there is a branch of the Pesto restaurant chain.

The launderette in the centre of the village, opposite The Royal Oak pub, was opened c. 1966 by the actress Pat Phoenix, who played Elsie Tanner in the popular soap Coronation Street.

The local newspapers are the Bromborough and Bebington News and the Wirral Globe.

The main road through the area is the A41 New Chester Road. The B5137 Spital Road joins the A41 at Bromborough. Junctions 4 and 5 of the M53 motorway are equidistant from Bromborough, each about 3 km (1.9 mi) away; Junction 4 is to the west and Junction 5 is to the south.

Bromborough and Bromborough Rake railway stations are both situated on the Wirral Line of the Merseyrail network. Trains run every 15 minutes to Chester, every 30 minutes to Ellesmere Port, and there are six trains per hour to Liverpool Central.

Liverpool John Lennon Airport, approximately 6 km (3.7 mi) across the Mersey Estuary, is visible from Bromborough. However, the airport is about 20 km (12 mi) by road.

All content from Kiddle encyclopedia articles (including the article images and facts) can be freely used under Attribution-ShareAlike license, unless stated otherwise. Cite this article:
Bromborough Facts for Kids. Kiddle Encyclopedia.