Bruno Le Maire (born 15 April 1969) is a French politician and former diplomat who has served as Minister of the Economy and Finance since 2017 under President Emmanuel Macron. A former member of The Republicans (LR), which he left in 2017 to join La République En Marche! (LREM), he was Secretary of State for European Affairs from 2008 to 2009 and Minister of Food, Agriculture and Fishing from 2009 to 2012 under President Nicolas Sarkozy. Le Maire is also a noted writer, with his book Des hommes d'Etat winning the 2008 Edgar Faure Prize.

Le Maire began attending École normale supérieure in 1989 and Paris-Sorbonne University where he studied French literature. He graduated from Sciences Po in 1995 and was accepted into École nationale d'administration (ÉNA) in 1996.

Bruno Le Maire is married to painter Pauline Doussau de Bazignan who is the mother of his four sons. His wife was employed as his parliamentary assistant from 2007 to 2013.

Le Maire is fluent in French, English, Italian and German.

After leaving the ÉNA in 1998, Bruno Le Maire found a job in the Ministry of Foreign Affairs and International Development. He eventually joined the team assisting the Secretary General of the Office of the President, Dominique de Villepin. He went on to a role of Foreign Affairs Advisor in the ministry in 2002, then onto an advisor role in the Interior ministry in 2004. 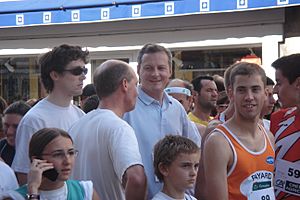 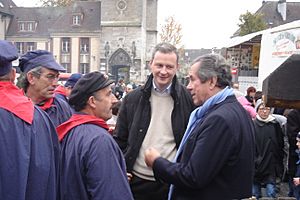 From 2007 to 2008, he was a member of the National Assembly of France, representing Eure's 1st constituency. After becoming a political advisor to the UMP, Le Maire was appointed to be Secretary of State in charge of European Affairs, replacing Jean-Pierre Jouyet, in December 2008, serving until 2009.

From 2008, Le Maire served as a political advisor for the Union for a Popular Movement. He also serves as a council member of Evreux.

In June 2009, Le Maire became the new Minister of Food, Agriculture and Fishing in the government of François Fillon. During his tenure at the Ministry, he created a new framework to modernize French agriculture, food and fishing. He also hosted the G20 Agriculture summit in 2011, which resulted in the creation of AMIS (Agricultural Market Information System). The main objective of AMIS is to monitor the global agricultural market under a rotating presidency. An intervention Forum can be convoked if the presiding country judges it necessary. 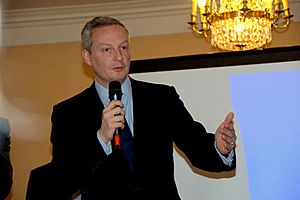 Bruno Le Maire speaking at a public event in 2013 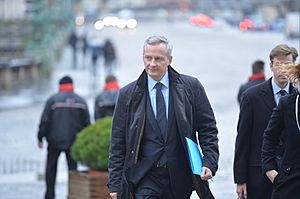 In August 2012, Le Maire announced that he would be a candidate for the presidency of the Union for a Popular Movement, competing against former Prime Minister François Fillon, Secretary General Jean-François Copé and former Minister of Ecology Nathalie Kosciusko-Morizet. He decided to develop a reformist line and to focus his campaign around four main axes:

He failed however to obtain the necessary number of sponsors. In November 2014, Le Maire obtained 29.8% of votes against Nicolas Sarkozy in the election for the presidency of The Republicans (formerly UMP).

Le Maire was considered a serious challenger of the 2016 centre-right primary as the polls suggested he could be third-placed but got a poor result with 2.4%. He became LR candidate François Fillon’s international affairs spokesman, but resigned when Fillon was embroiled in a financial scandal during his campaign. Le Maire has since distanced himself from his party, calling for the right to work constructively with Macron to ensure the president's five years in office succeeds and prevents the far-right National Front making further electoral inroads.

On 17 May 2017, The Republicans Secretary-General Bernard Accoyer issued a statement that anyone from the party that was a member of the government was no longer a member, including Le Maire.

Minister of the Economy and Finance, 2017–present 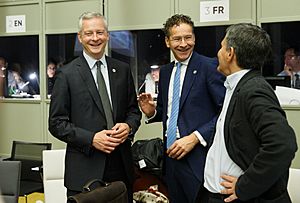 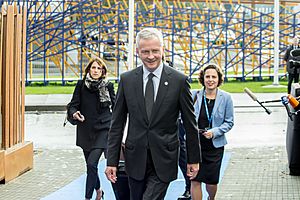 By November 2017, Le Maire was reported to explore his options to succeed Jeroen Dijsselbloem as the next President of the Eurogroup; the role of which was eventually given to Mário Centeno of Portugal. In 2019, he led the European Union's selection process for a European candidate to succeed Christine Lagarde as managing director of the International Monetary Fund.

During the conservative primaries in 2016, Le Maire shifted to the right, taking a tough stance on law and order and national identity issues. He called for the immediate expulsion of foreigners regarded as suspect by the security services, the deportation of foreign nationals who complete jail terms, and a curb of refugee numbers.

Le Maire has set out a free-market economic agenda, calling for the privatisation of France's labour offices, the end of subsidised jobs and capping of welfare benefits. Since taking office, he has steered Macron's drive to lighten the government touch on the economy and cut red-tape, and is overseeing a push to privatize airports and other state-controlled companies.

In 2016, however, Le Maire was quoted as saying the prospect of Britain leaving the European Union was a "fabulous opportunity for France" as it would remove the bloc's main champion of deregulation. He vowed on 9 July 2017 to put forward a plan to protect French companies from foreign takeovers.

On foreign trade, Le Maire expressed his opposition against the Transatlantic Trade and Investment Partnership (TTIP) and also argued for a more protectionist trade policy in order to better defend against "dumping" by China.

In August 2017, Le Maire called upon EU nations to step up efforts to address how they tax the digital economy and stated that a "new momentum" was needed to get a fairer contribution from digital platforms, after a report that Airbnb paid less than €100,000 of taxes in France in 2016. He categorised low tax payments as "unacceptable".

Amid the COVID-19 pandemic, Le Maire and his German counterpart Olaf Scholz were credited as instrumental in overcoming Dutch and Italian resistance and securing the EU's 500 billion euros emergency deal to provide financial aid to workers, companies and governments struggling as a result of the virus.

In July 2020, Le Marie announced that the French government will cut taxes French companies have to pay in addition to normal corporate income tax by 20 million euros over the course of next two years.

On Brexit itself, Le Maire caused controversy on 20 July 2017 when he told the French Parliament's economic affairs committee: "The United Kingdom has a remaining balance to pay to the EU budget of €100 billion" The view held by Le Maire has been shared by European Leaders since April 2017 with some of them believing the "divorce-bill" will lead the UK to owing the European Union £50 billion He also promised to set up a special court to handle English-law cases for financial contracts after Brexit during a conference in New York.

Speaking to the BBC in January 2019, Le Maire said the Brexit withdrawal agreement could not be renegotiated and it was up to the UK to find way through the impasse. He also said a no-deal Brexit would be "catastrophic" for the UK.

On foreign policy, Le Maire is a traditional Gaullist, favouring French national independence. He has argued for a reinforced European defense policy to secure the bloc's exterior borders and fight terrorism, with more spending on the military by Germany in particular. 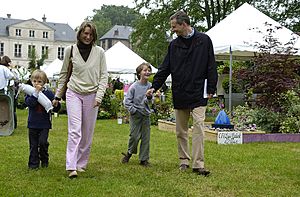 Le Maire is married to Pauline Doussau de Bazignan. They have four children. The family has a holiday home of Saint-Pée-sur-Nivelle.

In the movie La Conquête (The Conquest), about Nicolas Sarkozy's career, he was played by Emmanuel Noblet.

All content from Kiddle encyclopedia articles (including the article images and facts) can be freely used under Attribution-ShareAlike license, unless stated otherwise. Cite this article:
Bruno Le Maire Facts for Kids. Kiddle Encyclopedia.