Kids Encyclopedia Facts
This page is about the community. For the geographical feature, see Central Valley (California).

California Valley (Spanish: Valle de California) is an unincorporated community located in the eastern part of San Luis Obispo County, California, in the northern portion of the Carrizo Plain.

California Valley is located at approximately 35.32° North, 120.01° West. The zoned area of the valley is 24,083 acres (97.5 square kilometers) and it is approximately 1,970 feet (600m) above sea level. The valley is very nearly flat, bordered to the west by mountains (part of the Los Padres National Forest) and to the east by a major fault, the San Andreas Fault (part of the Temblor Range). Immediately south of California Valley is Soda Lake, which is part of the Carrizo Plain National Monument.

Fewer than 500 people live in California Valley. Residents are attracted to the area by its dry climate and seclusion. Farming, ranching, petroleum development, solar energy projects, and BLM work related to the Carrizo Plain are among current, recent and planned activities in the area.

California Valley is believed to have been visited by Native Americans passing through to the sacred site at Painted Rock, but no permanent Indian settlement existed due to a lack of easily accessible water. California Valley was originally a Spanish land grant, the El Chicote Ranch, that was used for seasonal cattle raising.

Local newspaper archives suggest that outlaws hid in California Valley from time to time up until the 1930s. The original Spanish land grant was parceled out in 1960 into over 7,200 2.5 acre (10,000 m2) sections by optimistic real estate developers. According to their own advertising fliers, these 1960 developers believed that the California State Water Project might bring water to the area. After a more northerly route (closer to Highway 41/46) for the State Water Project was selected, many buyers lost heart, many properties were abandoned and the original developers went bankrupt. Several ranches and other developments built dirt or gravel airstrips and at least one paved runway was built and was at one time listed on aeronautical charts.

A few hundred people have built homes in this isolated area since, but the mass growth once promised never materialized. A Community Services District (CSD) was formed to deliver services to these residents, which includes trash collection, improvement of roads and the upkeep of a Community Center with a small public library.

Between 1960 and 2000, refuse and a number of old cars were dumped in the California Valley area, much of it by local residents, posing serious environmental issues. In 2006, a combined effort by the California Highway Patrol, California Department of Motor Vehicles, San Luis Obispo County Code Enforcement, and local businesses worked together to remove abandoned vehicles and accumulated trash.

California Valley is on the Carrizo Plain, which is an arid grassland. Only limited drinkable groundwater is available. Nearby Soda Lake is an alkali lake and undrinkable. "The future development of California Valley is anticipated to be limited by water availability"—San Luis Obispo County General Plan. Alkaline soils hinder attempts at agricultural development. 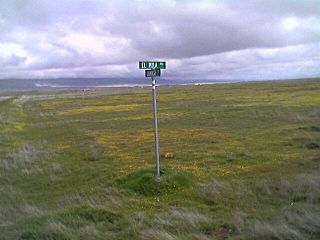 The Carrizo Plain National Monument, administered by the United States Bureau of Land Management, was established to protect elements of native history and the undeveloped ecology of the southern part of the valley. 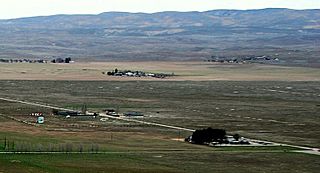 Aerial view northeast, with community center at lower right next to northern end of runway at right edge. Soda Lake Road is visible running diagonally up toward the left. The main community is about one mile (1.6 km) further south beyond the other end of the runway.

California Valley is located on Soda Lake Road about two miles (3 km) south of State Route 58. A small general store is closed, as well as the previously popular small restaurant. The community is served by a school and community center with library, open only on Wednesdays. Other than State Route 58 and Bitterwater Road, access is mainly through the Carrizo Plain via Soda Lake Road, which is a seasonal improved dirt road south of Soda Lake to State Route 33/State Route 166; or via smaller seasonal dirt roads to the east and south. No scheduled bus routes serve the community, and there are no rail lines.

The private and restricted California Valley Airport Class II-C 4,200 ft (1,300 m) paved runway extends south from the community center but is not marked on current aeronautical charts and is painted at the south end with a white "X" indicating that it is closed although it can be used with advance permission.

Community services are provided by the California Valley Community Service District (CSD). This includes road maintenance and limited trash service. The Community Center includes a fire station, small library, and community assembly hall. The address is 13084 Soda Lake Road, on the south side of Soda Lake Road, approximately 2 miles (3.2 km) south of Highway 58, in the village of California Valley.

Water, a porta-potty and a pay phone are available at the Community Center. The quality of the water is in dispute. Many California Valley residents consider the water potable, but signage to the contrary has been posted in the past.

The local zip code is 93453. Mail is delivered to drop boxes at the Community Center. Main roads (Belmont Trail, Soda Lake Road, Seven Mile Road) are paved to an extent. Others are packed dirt or decomposed granite. Other than the main roads, the only maintained roads are those with homes on them. Roads are frequently maintained only up to residential driveways.

Blue "No Services" signs are posted at major intersections leading into the California Valley area. No gas stations exist in the California Valley area. The nearest gasoline stations are in Taft/Maricopa, Atascadero/Santa Margarita, and on the outskirts of Paso Robles. This has led to stranded travelers on a number of occasions. Tow truck service is available but may be delayed for several hours.

Law enforcement is provided by the County Sheriff, but there is no local office or assigned unit. The California Highway Patrol infrequently patrols Highway 58. No medical services (doctors, clinics, hospitals) are available in the California Valley area. Fire and rescue services are provided by San Luis Obispo County Fire Station #42 located at the Community Center. The Station is staffed Tuesday through Thursday. Helicopter MEDEVAC service from Santa Maria and Bakersfield is available, weather permitting.

The local school is Carrisa Plains Elementary School, built in 1953, with about 46 students in attendance. The few high school students are bused to Atascadero, California, which had one of the last high school dormitories in California until the 1990s for their use. The nearest community college is in Taft. The nearest four-year university is California Polytechnic State University, San Luis Obispo.

Nearby communities and services

The even smaller community of Simmler is about 3 miles (4.8 km) northeast along Highway 58. The Bureau of Land Management operates the Carrizo Plain National Monument Guy L. Goodwin Education Center about 12 miles (19 km) south on Soda Lake Road during limited hours for several months of the year.

All content from Kiddle encyclopedia articles (including the article images and facts) can be freely used under Attribution-ShareAlike license, unless stated otherwise. Cite this article:
California Valley, California Facts for Kids. Kiddle Encyclopedia.