The Cape Henry Lighthouse is a lighthouse in Virginia. It is near Virginia Beach, Virginia. For a long time, it has been important for the large amount of shipping entering the Chesapeake Bay from the Atlantic Ocean. The first building was the first lighthouse authorized by the U.S. government. It was built in 1792. The lighthouse was also the first federal construction project under the Constitution. It was expected to cost $15,200 to build. Another $2,500 was needed to finish the lighthouse. A second lighthouse was built in 1881 a short distance away. It was built because people were worried the first building was not stable. 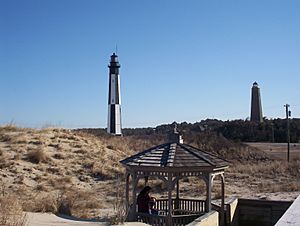 The newer light station and the old lighthouse at Cape Henry

In 1798, Benjamin Latrobe visited Cape Henry Lighthouse and described it as "an octangular truncated pyramid of eight sides, rising 90 feet to the light..." The Old Cape Henry Lighthouse is 26 feet in diameter at its base and 16 feet at its top. It was built with Aquia Creek sandstone. The sandstone came from the same source as the White House.

The new lighthouse is 157 feet (48 m) tall. It was built of cast iron and wrought iron. It also has a more powerful light.

The lighthouses are located in the city of Virginia Beach. They are inside of the boundaries of Fort Story. It is an Army base. The Cape Henry Memorial is next to the lighthouses.

All content from Kiddle encyclopedia articles (including the article images and facts) can be freely used under Attribution-ShareAlike license, unless stated otherwise. Cite this article:
Cape Henry Light Facts for Kids. Kiddle Encyclopedia.