The Kalina, also known as the Caribs, mainland Caribs and several other names, are an indigenous people native to the northern coastal areas of South America. Today, the Kalina live largely in villages on the rivers and coasts of Venezuela, Guyana, Suriname, French Guiana, and Brazil. They speak a Cariban language known as Carib. They may be related to the Island Caribs of the Caribbean, though their languages are unrelated.

Traditionally, Westerners have called the Kalina people variants of the Spanish name Caribe, including "Caribs" in English, Galina in French, and Karaïeb in Dutch. However, the speakers call themselves Kalina or Karìna [kaɽiɁnʲauɽaŋ], spelled variously. Variants include Kali'na, Cariña, Kariña, Kalihna, Kalinya; other native names include Maraworno and Marworno. Kalina may distinguish themselves as Kali'na tilewuyu ("true Kalina"), partly to differentiate themselves from the mixed Maroon-Kalina inhabitants of Suriname. Use of "Kalina" and related variants has become common practice only recently in publications; many sources continue to use "Caribs" or associated names. 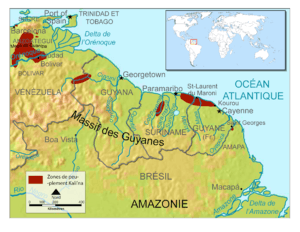 Map indicating the current geographic distribution of the Kali'na population

Lacking a written form of language before the arrival of Europeans, Kali'na history was passed down orally from one generation to the next through tales of myth and legend.

For a long time, the few Europeans studying the history of the Amerindian people of this area did not distinguish between the various Caribbean tribes. Once the period of exploration was over, interest in the study of these people diminished greatly and did not re-emerge until the end of the 20th century, when a few French expatriates, notably Gérard Collomb, became interested in the Kali'na, and the Kali'na themselves began to relate their history, in particular Félix Tiouka, president of the Association of Amerindians of French Guiana (AAGF), and his son Alexis.

For the reasons given, historical information regarding the Kali'na is rare and incomplete. 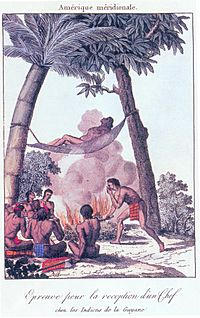 Drawing of a Kali'na ritual.

Making up for lack of written records, archaeologists have to date uncovered 273 Amerindian archeological sites on only 310 km² of the land recovered from the Sinnamary River by the Petit-Saut Dam. Some date back as far as two thousand years, establishing the antiquity of the Amerindian presence in this area.,

The weak historical clues available indicate that before 1492, the Kali'na inhabited the coast (from the mouth of the Amazon River to that of the Orinoco), dividing their territory with the Arawak, against whom they fought during their expansion toward the east and the Amazon River.,

They were prolific travelers even though they weren't nomads. They often traveled by land and by sea as far as the area around the Orinoco river to visit family, trade, and marry. They often went to the area surrounding the Essequibo river (now in Guyana) to collect pebbles of red porphyry (takuwa), which Kali'na women prized for polishing their pottery. The term takuwa also refers to jade, which was often traded in the Americas in general.

In their first contact with Europeans, the Kali'na thought they were dealing with the spirits of the sea, Palanakiłi, a name they use to this day when referring to whites.

One of the first consequences of the arrival of Europeans, as in the case of many other Native American peoples, was a decrease in population due to violence inflicted by European soldiers genocide, and diseases brought over by the Europeans. The Kali'na quickly succumbed in large numbers, because their immune systems were not adapted to the viruses and bacteria of the Old World. 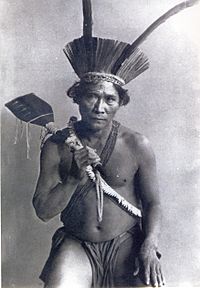 Kali'na man in Paris in 1892 holding a putu, or wooden club.

The second half of the nineteenth century saw the heyday of World's Fairs, in which European countries were displaying their wealth with colonial "villages" representing the colonized cultures. Although the World's Fairs of Paris did not have "Amerindian villages," public curiosity was such that Kali'na were sent to the capital twice - once in 1882 and again in 1892 - to be exhibited as oddities at the Jardin d'Acclimatation.,

Fifteen Kali’na, all members of one family living in Sinnamary and Iracoubo, were sent to Pau:wa ("The Land of the Whites") in July 1882. Almost nothing is known about them, except their names and the fact that they were housed in huts on the lawn of the Jardin d'Acclimatation. The trip lasted four months, including three in Paris and a month's journey by boat (round trip). They were accompanied by a Creole who acted as intermediary and, presumably, interpreter. There are several portraits of them, taken by photographer Pierre Petit.

The part of South America where the Kali'na live is very sparsely populated. However, the people of this ethnic group are such an extreme minority in all of the countries in which they are well established that locally they are a majority only in certain very secluded areas. Their current geographic distribution covers only a small fraction of their Pre-Columbian territory. 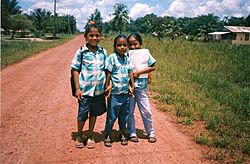 Kali'na girls in Suriname in the village of Bigi Poika.

They use mostly percussion instruments. Their sanpula (or sambula) is a large drum with two skins stretched over either end of the shell by hoops pulled together with cord and is played with a mallet. They also have two kinds of maracas, called a kalawasi (or kalawashi) and a malaka.

Their flute, the kuwama, is still made but is more and more often replaced by the European flute. There is also a terra cotta horn called a kuti. 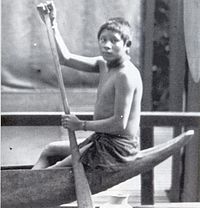 Thanks to the relatively significant number of speakers, it is one of the most likely Amazonian tongues to survive. Some experiments with written transcription were undertaken in Guyana. Linguistic standardization of a Kali'na writing system however is plagued by the diversity of the many different forms of the written language currently in use, which have been influenced by the languages of the colonists of the countries in which the Kali'na live, Spanish, Portuguese, Dutch, French and English. Thus, even as far as their ethnonym is concerned, Kali'na, there are no fewer than nine different writing systems. Kali'na therefore remains a primarily oral language.

All content from Kiddle encyclopedia articles (including the article images and facts) can be freely used under Attribution-ShareAlike license, unless stated otherwise. Cite this article:
Kalina people Facts for Kids. Kiddle Encyclopedia.