Castle Air Museum is a military aviation museum located in Atwater, California, United States adjacent to Castle Airport, a former United States Air Force Strategic Air Command base which was closed in 1995, after the end of the Cold War. It is one of the largest aerospace museums displaying vintage aircraft in the western United States.

The museum opened with 12 aircraft on 20 June 1981 as a branch of the United States Air Force Museum system. When Castle Air Force Base was closed in April 1995 and became Castle Airport, the museum similarly became private. The loss of federal funding eventually caused financial problems for the museum.

It currently displays over 60 restored World War II, Korean War, Cold War, and modern era aircraft. The outdoor museum covers 11 acres (45,000 m2), and among the exhibit highlights are a Lockheed SR-71 Blackbird (one of only 19 surviving), a Boeing B-52D Stratofortress, and the massive, ten-engined Convair RB-36H Peacemaker, one of only four surviving and the largest mass-produced piston aircraft in history. An indoor museum features artifacts, photographs, uniforms, war memorabilia, aircraft engines, and a restored B-52 Stratofortress flight deck. A crew of volunteers restores and maintains the aircraft on display. The museum also hosts a periodic Open House in which visitors can view the interiors of certain planes.

In May 2008, the museum reached its 50th displayed aircraft milestone with the addition of a Douglas A-4L Skyhawk. The aircraft was shipped to the museum in August 2006, and restored at a cost of $12,000.

In October 2013, the Museum received a retired VC-9C aircraft that had previously served during several administrations as an alternate Air Force One and Air Force Two aircraft when use of the primary VC-137 or VC-25 was impractical. Vice Presidents such as Al Gore, Dick Cheney, and First Ladies such as Nancy Reagan, Barbara Bush, and Hillary Clinton, as well as Presidents Bill Clinton and Ronald Reagan, were among the individuals who used the plane.

The B-29A Superfortress exhibit is reported to be haunted by a spirit named "Arthur." Museum management has reported that visitors, including paranormal investigators, have heard knocking and footsteps from inside the plane. In addition, lights in the aircraft have been known to turn on and off, and the propellers are known to turn even though they are locked in place. An apparition has been photographed on several occasions, and paranormal researchers have detected anomalous readings on equipment. The paranormal occurrences have been featured on an episode of UPN's Real Ghosts (1995). 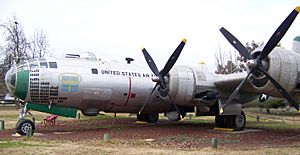 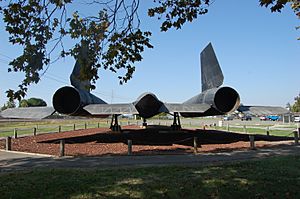 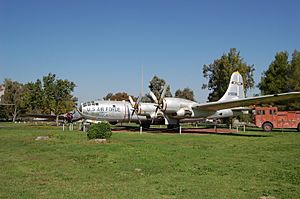 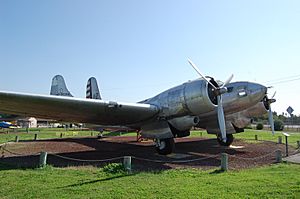 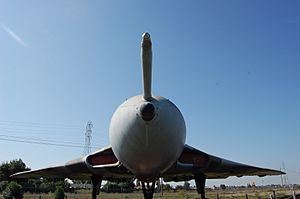 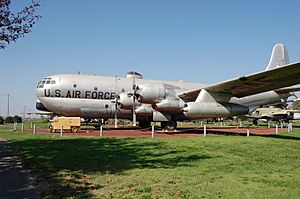 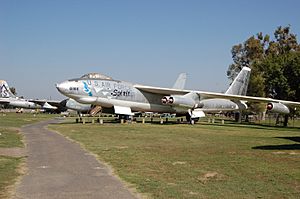 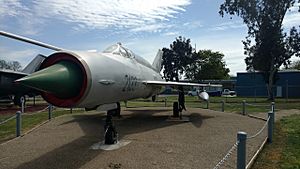 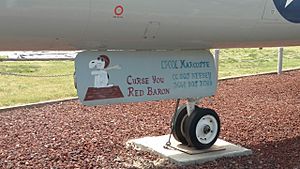 Castle Air Museum has several aircraft that cannot be displayed outdoors, as their fabric coverings do not hold up in the San Joaquin Valley weather. The museum is working to raise funds for a suitable building to display these and other items that they do not currently have indoor space to display.

The museum has recently received several aircraft which are currently under restoration before they will be displayed on the museum grounds:

All content from Kiddle encyclopedia articles (including the article images and facts) can be freely used under Attribution-ShareAlike license, unless stated otherwise. Cite this article:
Castle Air Museum Facts for Kids. Kiddle Encyclopedia.