Cazuela ( or kaˈswela) is the common name given to a variety of dishes, especially from South America. It receives its name from the cazuela (Spanish for cooking pot) - traditionally, often shallow and of unglazed earthenware - in which it is cooked. The ingredients and preparation vary from region to region, but it is usually a mid-thick flavoured stock obtained from cooking several kinds of meats and vegetables mixed together. 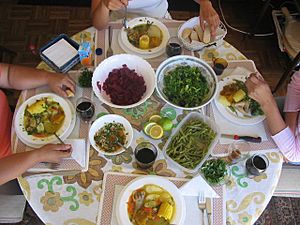 The cazuela is a typical dish of Chile. The most common types are made of chicken or beef, but there are also other types made from pork, lamb and turkey.

One of the most important facts about Chilean Cazuela is that is made by cooking all the ingredients separately and uniting them when serving in the plate. One typical dish of Chilean cazuela is made by boiling the meat (normally beef or chicken) with chopped onions and carrots, all the rest of the ingredients are boiled separated in individual pots, but the stock is complemented with the stock from the boiling of the vegetables; the plate is served accompanied of a piece of squash or zapallo camote in spanish, one big potato or a couple of small potatoes, green beans, previously cooked rice and a piece of sweetcorn. Its normally topped with a bit of fresh coriander, parsley or ají verde.

Cazuela is a typical dish of the Amazonas Region in Peru. The dish is prepared and cooked differently in each province or district of Amazonas.

In Chachapoyas, cazuela is prepared by boiling a piece of hen, a good piece of meat and a good piece of sheep. Add some wild cabbage, rice, carrot, sweetcorn grains, and a glass of white wine.

A few minutes before taking the saucepot out of the fire, add some milk and vermicelli noodles (also called cabello de ángel noodles). It is necessary to try that the cazuela has sufficient broth or juice to be able to be served as a soup.

In Puerto Rico, cazuela is a traditional crustless pie cooked in banana leaves usually made during the Christmas season. It is similar to a pumpkin pie but uses batata (a type of sweet potato), calabasa (Caribbean squash), raisins, ginger, spices, coconut milk, eggs, butter, and bread, flour or rice flour. There are recipes with added sweet plantain, taro, or yuca with baking powder and lard.

In southern Arizona, cazuela is frequently made with carne seca or machaca (two varieties of dried beef) with potatoes, garlic, green chiles, and herbs.

All content from Kiddle encyclopedia articles (including the article images and facts) can be freely used under Attribution-ShareAlike license, unless stated otherwise. Cite this article:
Cazuela Facts for Kids. Kiddle Encyclopedia.