A cermet is a ceramic material, like porcelain or clay, mixed with a metal, like steel or copper. They are long lasting, tough composite materials that are stress resistant and produce little friction. Cermets also have the properties of metals. They can conduct electricity. Like metals cermets are somewhat malleable.

A cermet is ideally designed to have the optimal properties of both a ceramic, such as high temperature resistance and hardness, and those of a metal, such as the ability to undergo plastic deformation. The metal is used as a binder for an oxide, boride, or carbide. Generally, the metallic elements used are nickel, molybdenum, and cobalt. Depending on the physical structure of the material, cermets can also be metal matrix composites, but cermets are usually less than 20% metal by volume.

Cermets are used in the manufacture of resistors (especially potentiometers), capacitors, and other electronic components which may experience high temperature.

Some types of cermets are also being considered for use as spacecraft shielding as they resist the high velocity impacts of micrometeoroids and orbital debris much more effectively than more traditional spacecraft materials such as aluminum and other metals.

After World War II, the need to develop high temperature and high stress-resistant materials became clear. During the war, German scientists developed oxide base cermets as substitutes for alloys. They saw a use for this for the high-temperature sections of new jet engines as well as high temperature turbine blades. Today ceramics are routinely implemented in the combuster part of jet engines because it provides a heat-resistant chamber. Ceramic turbine blades have also been developed. These blades are lighter than steel and allow for greater acceleration of the blade assemblies.

The United States Air Force saw potential in the material technology and became one of the principal sponsors for various research programs in the US. Some of the first universities to research were Ohio State University, University of Illinois, and Rutgers University.

The word cermet was actually coined by the United States Air Force, the idea being that they are a combination of two materials, a metal and a ceramic. Basic physical properties of metals include ductility, high strength, and high thermal conductivity. Ceramics possess basic physical properties such as a high melting point, chemical stability, and especially oxidation resistance.

The first ceramic metal material developed used magnesium oxide (MgO), beryllium oxide (BeO), and aluminum oxide (Al2O3) for the ceramic part. Emphasis on high stress rupture strengths was around 980 °C. Ohio State University was the first to develop Al2O3 based cermets with high stress rupture strengths around 1200 °C. Kennametal, a metal-working and tool company based in Latrobe, PA, developed the first titanium carbide cermet with a 2800 psi and 100-hour stress-to-rupture strength at 980 °C. Jet engines operate at this temperature and further research was invested on using these materials for components.

Quality control in manufacturing these ceramic metal composites was hard to standardize. Production had to be kept to small batches and within these batches, the properties varied greatly. Failure of the material was usually a result of undetected flaws usually nucleated during processing.

The existing technology in the 1950s reached a limit for jet engines where little more could be improved. Subsequently, engine manufactures were reluctant to develop ceramic metal engines.

Interest was renewed in the 1960s when silicon nitride and silicon carbide were looked at more closely. Both materials possessed better thermal shock resistance, high strength, and moderate thermal conductivity.

Cermets were first used extensively in ceramic-to-metal joint applications. Construction of vacuum tubes was one of the first critical systems, with the electronics industry employing and developing such seals. German scientists recognized that vacuum tubes with improved performance and reliability could be produced by substituting ceramics for glass. Ceramic tubes can be outgassed at higher temperatures. Because of the high-temperature seal, ceramic tubes withstand higher temperatures than glass tubes. Ceramic tubes are also mechanically stronger and less sensitive to thermal shock than glass tubes. Today, cermet vacuum tube coatings have proved to be key to solar hot water systems.

Ceramic-to-metal mechanical seals have also been used. Traditionally they have been used in fuel cells and other devices that convert chemical, nuclear, or thermionic energy to electricity. The ceramic-to-metal seal is required to isolate the electrical sections of turbine-driven generators designed to operate in corrosive liquid-metal vapors. 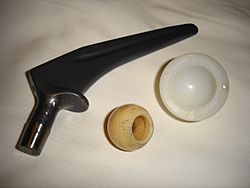 Bioceramics play an extensive role in biomedical materials. The development of these materials and diversity of manufacturing techniques has broadened the applications that can be used in the human body. They can be in the form of thin layers on metallic implants, composites with a polymer component, or even just porous networks. These materials work well within the human body for several reasons. They are inert, and because they are resorbable and active, the materials can remain in the body unchanged. They can also dissolve and actively take part in physiological processes, for example, when hydroxylapatite, a material chemically similar to bone structure, can integrate and help bone grow into it. Common materials used for bioceramics include alumina, zirconia, calcium phosphate, glass ceramics, and pyrolytic carbons.

One important use of bioceramics is in hip replacement surgery. The materials used for the replacement hip joints were usually metals such as titanium, with the hip socket usually lined with plastic. The multiaxial ball was tough metal ball but was eventually replaced with a longer-lasting ceramic ball. This reduced the roughening associated with the metal wall against the plastic lining of the artificial hip socket. The use of ceramic implants extended the life of the hip replacement parts.

Ceramic parts have been used in conjunction with metal parts as friction materials for brakes and clutches.

Cermets are also used in machining on cutting tools.

Cermets are also used as the ring material in high-quality line guides for fishing rods.

All content from Kiddle encyclopedia articles (including the article images and facts) can be freely used under Attribution-ShareAlike license, unless stated otherwise. Cite this article:
Cermet Facts for Kids. Kiddle Encyclopedia.