Climate of Dallas facts for kids

A couple of times each year, warm and humid air from the south overrides cold, dry air, leading to freezing rain, which often causes major disruptions in the city if the roads and highways become slick. On the other hand, daytime highs above 65 °F (18 °C) are not unusual during the winter season. Extremes in weather are more readily seen in Dallas and Texas as a whole than along the Pacific and Atlantic coasts, due to the state's location in the interior of the United States.

Spring and autumn bring pleasant weather to the area. Vibrant wildflowers (such as the bluebonnet, Indian paintbrush and other flora) bloom in spring and are planted around the highways throughout Texas. Springtime weather can be quite volatile, but temperatures themselves are mild. The weather in Dallas is also generally pleasant between late September and early December, and unlike springtime, major storms rarely form in the area.

In the spring, cool fronts moving south from Canada collide with warm, humid air streaming in from the Gulf Coast. When these fronts meet over north central Texas, severe thunderstorms are generated with spectacular lightning shows, torrents of rain, hail, and occasionally, tornadoes. Over time, tornadoes have perhaps been the biggest natural threat to the city.

Summers are hot, with temperatures approaching those of desert and semidesert locations of similar latitude. Heat waves can be severe. During the summer, the region receives warm and dry winds from the north and west.

The U.S. Department of Agriculture places Dallas in Plant Hardiness Zone 8a. According to the American Lung Association, Dallas has the 12th highest ozone air pollution in the nation, ranking it behind Los Angeles and Houston. 30% of the air pollution in Dallas, and the Metroplex in general, comes from the three cement plants in the town of Midlothian, as well concrete installations in neighboring Ellis County, but the foremost contributor to air pollution in Dallas is exhaust from automobiles. Due to the area's spread-out nature and high amount of urban sprawl, automobiles are the only viable mode of transportation for many residents in the metropolitan area. 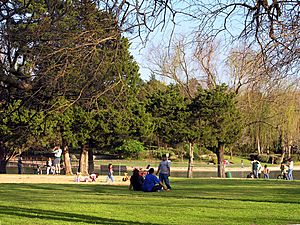 The spring and fall seasons are pleasant in Dallas, as seen in this March photograph from an Oak Cliff park 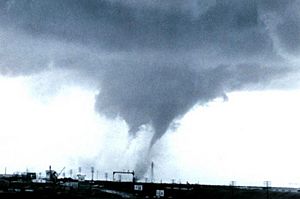 A multiple-vortex tornado outside of Dallas, Texas on April 2, 1957.

Since Dallas lies at the lower end of the "Tornado Alley", tornadoes are perhaps the biggest threat to the city. Dallas was hit by a powerful tornado on 2 April 1957. The tornado would have likely been an F3. On March 28, 2000, the “Fort Worth Tornado” impacted Dallas's neighbor Fort Worth's downtown, and a tornado in Arlington, Texas also occurred that day damaging some homes. That day was the Metroplex's most damaging tornado outbreak since the 1957 event. Another widespread tornado outbreak struck the area in the Dallas tornado outbreak of April 3, 2012, slightly damaging Rangers Ballpark in Arlington and damaging some planes and grounding the others at Dallas-Fort Worth International Airport and Dallas Love Field, heavily damaging an elementary school, and destroying semis in a facility. On December 26, 2015, a rare winter tornado outbreak led to spawning several tornadoes, including an EF-4 tornado near the city of Garland and Rowlett that caused 10 deaths.

Dallas was without power for three days, all telephone and telegraph service was down, and rail service was canceled. The only way to reach Oak Cliff was by boat. West Dallas was hit harder than any other part of the city—the Dallas Times Herald said "indescribable suffering" plagued the area. Much to the horror of residents, thousands of livestock drowned in the flood and some became lodged in the tops of trees—the stench of their decay hung over the city as the water subsided.

After the disastrous flood, the city wanted to find a way to control the reckless Trinity and to build a bridge linking Oak Cliff and Dallas. The immediate reaction was citizens and the city clamoring to build an indestructible, all-weather crossing over the Trinity. This had already been tried following the 1890 flood—the result was the "Long Wooden Bridge" that connected Jefferson Boulevard in Oak Cliff and Cadiz in Dallas, but the resulting unstable bridge was easily washed away by the 1908 flood. George B. Dealey, publisher of the Dallas Morning News, proposed a 1.5 miles (2.4 km) concrete bridge based on a bridge crossing the Missouri River in Kansas City. Ultimately a US$650,000 bond election was approved and in 1912, the Oak Cliff viaduct (now the Houston Street viaduct) was opened among festivities drawing 58,000 spectators. The bridge, at the time, was the longest concrete structure in the world.

In May 2015, the Dallas-Fort Worth Airport received a record-shattering 16.96 inches of rainfall, in a month that obliterated heavy-rainfall records virtually throughout the Southern Plains (Texas and Oklahoma, especially). Strangely enough, a very hot, dry summer followed, resulting in some parts of Texas returning to abnormally dry conditions as early as July 2015, soon after the record May rains erased years-long drought conditions over the area.

All content from Kiddle encyclopedia articles (including the article images and facts) can be freely used under Attribution-ShareAlike license, unless stated otherwise. Cite this article:
Climate of Dallas Facts for Kids. Kiddle Encyclopedia.