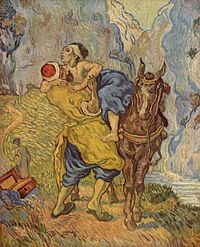 Conscience is an ability or a faculty that distinguishes whether one's actions are right or wrong. It leads to feelings of remorse when a human does things that go against his/her moral values, and to feelings of rectitude or integrity when actions conform to such norms. It is also often viewed as the attitude which informs moral judgment before an action is performed. The extent to which such moral judgments are, or should be, based wholly in reason has been a matter of controversy almost throughout the history of Western philosophy. Commonly used metaphors refer to the "voice within" and the "inner light".

Although there is no generally accepted definition of what conscience is or its role in ethical decision-making, three overlapping factors are generally relevant.

All content from Kiddle encyclopedia articles (including the article images and facts) can be freely used under Attribution-ShareAlike license, unless stated otherwise. Cite this article:
Conscience Facts for Kids. Kiddle Encyclopedia.