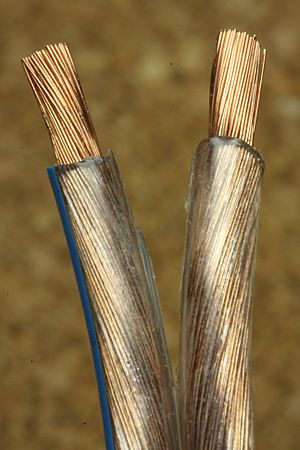 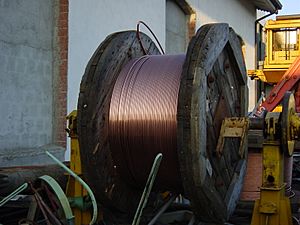 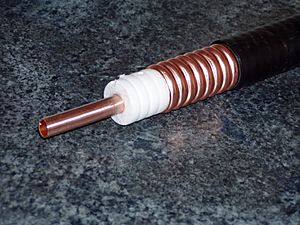 Coaxial cable made from copper

The theory of metals in their solid state helps to explain the unusually high electrical conductivity of copper. In a copper atom, the conduction band, is only half filled, so many electrons are able to carry electric current. When an electric field is applied to a copper wire, the conduction of electrons accelerates towards the electropositive end, thereby creating a current.

Because of its superior conductivity, copper became the international standard to which all other electrical conductors are compared. Several electrically conductive metals are less dense than copper, but require larger cross sections to carry the same current and may not be usable when limited space is a major requirement.

Silver, a precious metal, is the only metal with a higher electrical conductivity than copper. The high cost of silver combined with its low tensile strength limits its use to special applications, such as joint plating and sliding contact surfaces, and plating for the conductors in high-quality coaxial cables used at frequencies above 30 MHz. 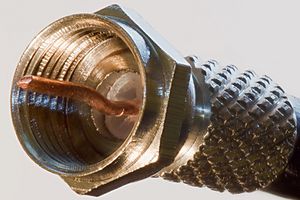 Tensile strength measures the force required to pull an object such as rope, wire, or a structural beam to the point where it breaks. The tensile strength of a material is the maximum amount of tensile stress it can take before breaking.

Copper’s higher tensile strength compared to aluminium is another reason why copper is used extensively in the building industry. Copper’s high strength resists stretching, neck-down, creep, nicks and breaks, and thereby also prevents failures and service interruptions. Copper is much heavier than aluminum for conductors of equal current carrying capacity, so the high tensile strength is offset by its increased weight.

Copper has a higher ductility than alternate metal conductors with the exception of gold and silver. Because of copper’s high ductility, it is easy to draw down to diameters with very close tolerances.

Usually, the stronger a metal is, the less pliable it is. This is not the case with copper. A unique combination of high strength and high ductility makes copper ideal for wiring systems. At junction boxes and at terminations, for example, copper can be bent, twisted, and pulled without stretching or breaking.

Creep is the gradual deformation of a material from constant expansions and contractions under “load, no-load” conditions. This process has adverse effects on electrical systems: terminations can become loose, causing connections to heat up or create dangerous arcing.

Copper has excellent creep characteristics which minimizes loosening at connections. For other metal conductors that creep, extra maintenance is required to check terminals periodically and ensure that screws remain tightened to prevent arcing and overheating.

Corrosion is the unwanted breakdown and weakening of a material due to chemical reactions. Copper generally resists corrosion from moisture, humidity, industrial pollution, and other atmospheric influences. However, any corrosion oxides, chlorides, and sulfides that do form on copper are somewhat conductive.

Under many application conditions copper is higher on the galvanic series than other common structural metals, meaning that copper wire is less likely to be corroded in wet conditions. However, any more anodic metals in contact with copper will be corroded since will essentially be sacrificed to the copper.

Metals and other solid materials expand upon heating and contract upon cooling. This is an undesirable occurrence in electrical systems. Copper has a low coefficient of thermal expansion for an electrical conducting material.

Soldering is a process whereby two or more metals are joined together by a heating process. This is a desirable property in electrical systems. Copper is readily soldered to make durable connections when necessary.

The inherent strength, hardness, and flexibility of copper building wire make it very easy to work with. Copper wiring can be installed simply and easily with no special tools, washers, pigtails, or joint compounds. Its flexibility makes it easy to join, while its hardness helps keep connections securely in place.

It has good strength for pulling wire through tight places (“pull-through”), including conduits. It can be bent or twisted easily without breaking. It can be stripped and terminated during installation or service with far less danger of nicks or breaks. And it can be connected without the use of special lugs and fittings. The combination of all of these factors makes it easy for electricians to install copper wire.

Types of copper wire and cable 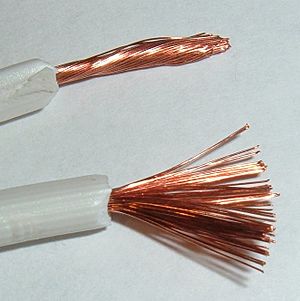 Solid wire consists of one strand of copper metal wire, bare or surrounded by an insulator. Single-strand copper conductors are typically used as magnet wire in motors and transformers. They are relatively rigid, do not bend easily, and are typically installed in permanent, infrequently handled, and low flex applications.

Stranded wire has a group of copper wires braided or twisted together. Stranded wire is more flexible and easier to install than a large single-strand wire of the same cross section. Stranding improves wire life in applications with vibration. A particular cross-section of a stranded conductor gives it essentially the same resistance characteristics as a single-strand conductor, but with added flexibility.

A copper cable consists of two or more copper wires running side by side and bonded, twisted or braided together to form a single assembly. Electrical cables may be made more flexible by stranding the wires.

Copper wires in a cable may be bare or they may be plated to reduce oxidation with a thin layer of another metal, most often tin but sometimes gold or silver. Plating may lengthen wire life and makes soldering easier. Twisted pair and coaxial cables are designed to inhibit electromagnetic interference, prevent radiation of signals, and to provide transmission lines with defined characteristics. Shielded cables are encased in foil or wire mesh.

Applications for copper wire and cable

Some of the major application markets for copper wire are: 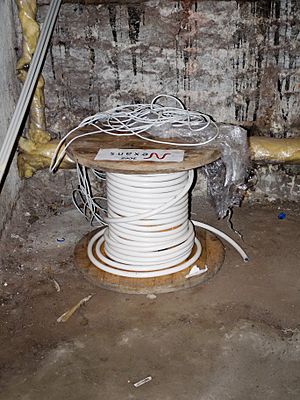 Twisted pair cabling is the most popular network cable and is often used in data networks for short and medium length connections (up to 100 meters or 328 feet). This is due to its relatively lower costs compared to optical fiber and coaxial cable. 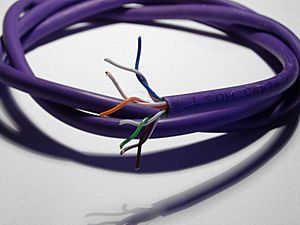 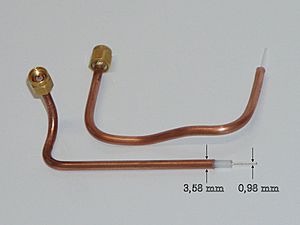 “Structured wiring” is the general term for 21st century On-premises wiring for high-capacity telephone, video, data-transmission, security, control, and entertainment systems. Installations usually include a central distribution panel where all connections are made, as well as outlets with dedicated connections for phone, data, TV and audio jacks. 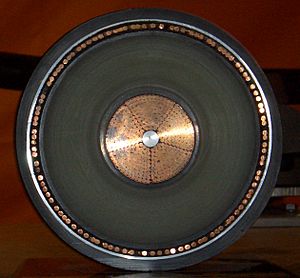 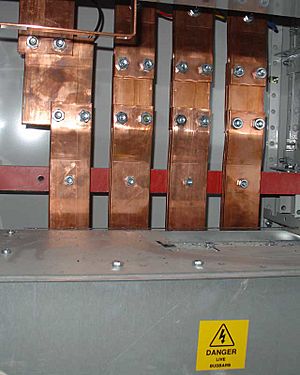 Power cables are used for the transmission and distribution of electric power, either outdoors or inside buildings. Details on the various types of power cables are available.

Copper is the preferred conductor material for underground transmission lines operating at high and extra-high voltages to 400 kV. The predominance of copper underground systems stems from its higher volumetric electrical and thermal conductivities compared to other conductors. These beneficial properties for copper conductors conserve space, minimize power loss, and maintain lower cable temperatures.

Copper continues to dominate low-voltage lines in mines and underwater applications, as well as in electric railroads, hoists, and other outdoor services.

Appliance wire for domestic applications and instruments is manufactured from bunch-stranded soft wire, which may be tinned for soldering or phase identification. Depending upon loads, insulation can be PVC, neoprene, ethylene propylene, polypropylene filler, or cotton. 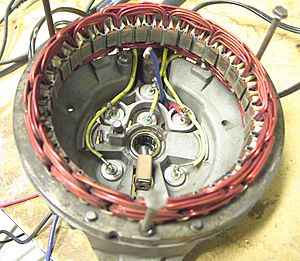 Copper wiring is strong enough to remain in place in an automotive alternator, subjected to constant vibration and mechanical shock

Automotive wire and cable requires insulation that is resistant to elevated temperatures, petroleum products, humidity, fire, and chemicals. PVC, neoprene, and polyethylene are the most common insulators. Potentials range from 12 V for electrical systems to between 300 V - 15,000 V for instruments, lighting, and ignition systems.

The most suitable materials for magnet wire applications are unalloyed pure metals, particularly copper and aluminium. When factors such as chemical, physical, and mechanical property requirements are considered, copper is considered the first choice conductor for magnet wire. 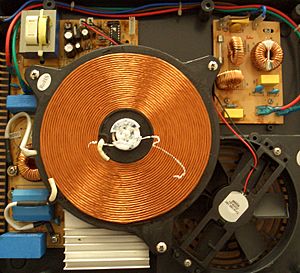 Multiple copper coils are used in an induction cooker

Copper will continue to be the predominant material in most electrical wire applications, especially where space considerations are important. The automotive industry for decades has considered the use of smaller-diameter wires in certain applications. Many manufacturers are beginning to use copper alloys such as copper-magnesium (CuMg), which allow for smaller diameter wires with less weight and improved conductivity performance. Special alloys like copper-magnesium are beginning to see increased usage in automotive, aerospace, and defense applications.

Due to the need to increase the transmission of high-speed voice and data signals, the surface quality of copper wire is expected to continue to improve. Demands for better drawability and movement towards “zero” defects in copper conductors are expected to continue.

During the 2000s commodities boom, copper prices increased worldwide, increasing the incentive for criminals to steal copper from power supply and communications cables.

All content from Kiddle encyclopedia articles (including the article images and facts) can be freely used under Attribution-ShareAlike license, unless stated otherwise. Cite this article:
Copper wire and cable Facts for Kids. Kiddle Encyclopedia.