Departments of France facts for kids

The départements (or departments) are administrative parts of France and many former French colonies, similar to English counties. Départements are a kind of local government.

The 101 French départements are now grouped into 22 metropolitan and five overseas régions. Their capitals are called préfectures. 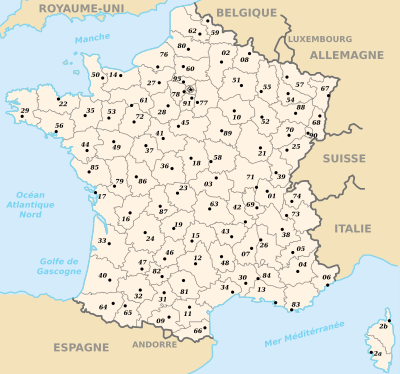 Départements (Departments) and Regions of France

All content from Kiddle encyclopedia articles (including the article images and facts) can be freely used under Attribution-ShareAlike license, unless stated otherwise. Cite this article:
Departments of France Facts for Kids. Kiddle Encyclopedia.