Dulwich Hill is a suburb in the Inner West of Sydney, in the state of New South Wales, Australia 7.5 kilometres south-west of the Sydney central business district, in the local government area of Inner West Council. Dulwich Hill stretches south to the shore of the Cooks River.

The suburb takes its name from the area of Dulwich in London. The name Dulwich Hill appears in Sands Directory of 1892. It had been known by several different names prior to this. Following European settlement, it was called Petersham Hill. It later took the name Wardell's Bush, a reference to Dr Robert Wardell, one of the area's early landowners. Other names the area was given were South Petersham and Fern Hill. 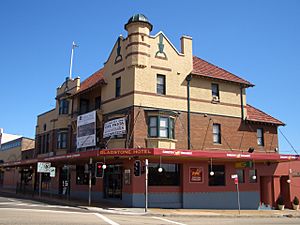 The area became part of Sydney's expanding tram network in 1889 and, like many suburbs in the inner-west, experienced rapid growth in the early twentieth century. As a consequence, the suburb has a large number of examples of Australian Federation architecture. It also features examples of Edwardian, Gothic and Italianate architecture. The tramway ran up until 1957.

Listed on the Register of the National Estate is the former public school in Seaview Street, which now operates as the Dulwich Hill High School of Visual Arts and Design. The building was designed by W.E.Kemp in the Romanesque style and built circa 1892. Situated in the same street is the Dulwich Hill Library, a converted cottage in the Victorian Gothic style.

The Wardell Road Junction in 2009. This is now where the heavy rail and light rail lines meet. Dulwich Hill station can be seen top left. The overgrown tracks curving towards the station are now used by the light rail, which opened in 2014. The tracks curving in the other direction became disused when the freight services that had used this line ceased operating.

Dulwich Hill railway station is located on Wardell Road, in the southern part of the suburb. The station is serviced by the Bankstown Line of the Sydney Trains network which provides reasonably frequent services to the Sydney CBD and south-western suburbs. Travelling west, residents can visit Bankstown and beyond to Liverpool and Lidcombe (a junction servicing several lines).

The Dulwich Hill Line of Sydney's light rail network includes four stations located in the suburb. These are - Dulwich Hill (adjacent to the railway station), Dulwich Grove (between New Canterbury Road and Hercules Street), Arlington (adjacent to Johnson Park near Constitution Road) and Waratah Mills (near Davis Street). Access to the city is quicker by train, but the light rail may be used for some cross-regional journeys. The service also interchanges with Lewisham railway station on the Airport, Inner West & South Line.

The 426, 428 and 412 routes provide bus connections between Dulwich Hill and the Sydney CBD. The 426 is the suburb's main bus route, starting at the corner of Marrickville and New Canterbury Roads and running along Marrickville Road towards Marrickville. The 428 service runs from Canterbury Station along New Canterbury Road towards Petersham. Both routes merge at Enmore and proceed to the city via Newtown. The 412 runs from Campsie to the city. It comes up Wardell Road, passing Dulwich Hill railway station, before running along the south side of the railway and proceeding up Livingstone Road towards Marrickville and Petersham. In the CBD, all routes proceed up Elizabeth Street and terminate at Martin Place.

Other routes serving the suburb are the 444/445, 418 and 425. The 444/445 routes run from Campsie Station to Balmain via Leichhardt, following the same route as the 428 through Dulwich Hill. The 418 between Bondi Junction and Burwood via Ashfield follows the same route as 426 between Marrickville and Dulwich Hill shops, before swinging on to New Canterbury Road, and then south to Hurlstone Park Station. The 425 follows the same route as the 426 to Marrickville, before heading to Tempe. It only operates during daytime hours on weekdays and Saturdays. All routes are operated by the State Transit Authority.

Dulwich Hill is an established residential area with many examples of Federation architecture.

The area is served by several religious organisations, including Anglican, Catholic and Greek Orthodox churches.

All content from Kiddle encyclopedia articles (including the article images and facts) can be freely used under Attribution-ShareAlike license, unless stated otherwise. Cite this article:
Dulwich Hill, New South Wales Facts for Kids. Kiddle Encyclopedia.