East Grand Forks, along with Grand Forks, was heavily damaged by a major flood in 1997. The entire city was under a mandatory evacuation and almost no homes were spared damage. After the flood, several neighborhoods had to be demolished because of damage. The city cleared development from the floodplain bordering the Red and Red Lake rivers. It developed a large park known as the Greater Grand Forks Greenway to provide a new recreation area for residents along the river. A similar park was developed in Grand Forks, North Dakota on the opposite side. The parklands, with trees and a variety of greenery, can absorb floodwaters and help protect the cities naturally. Moving residential and business development out of these areas also helps prevent future flood damage. In addition, a new system of dikes was constructed to protect the city from future flooding.

The city has rebuilt. New businesses attracted to the downtown include a Cabela's sporting goods store and movie theater complex. 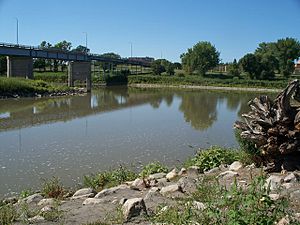 The confluence of the Red and Red Lake Rivers

East Grand Forks developed on both sides of the Red River. The main part of town is located north of the river; this was the original part that developed as the downtown area, as well as several early residential neighborhoods. The area south of the river is known as "The Point." The land narrows almost to a peninsula at the confluence of the Red and Red Lake rivers. "The Point" contains more residential development.

Four-lane U.S. Route 2; U.S. 2 Business Route; and Minnesota Highway 220 are three of the main routes in the city. Other nearby routes in the Grand Forks-East Grand Forks area include Interstate Highway 29, to the west of Grand Forks' downtown, and U.S. Highway 81. 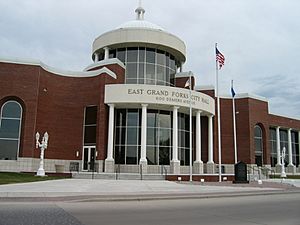 There were 3,488 households, of which 33.8% had children under the age of 18 living with them, 49.3% were married couples living together, 11.8% had a female householder with no husband present, 3.7% had a male householder with no wife present, and 35.3% were non-families. 28.7% of all households were made up of individuals, and 12% had someone living alone who was 65 years of age or older. The average household size was 2.45 and the average family size was 3.03.

Most of the tourist activities can be found in neighboring Grand Forks. EGF has a downtown shopping district that includes a small shopping center, a 15-screen movie theater, a Cabela's sporting goods store, and several local restaurants.

After the Flood of 1997, the Federal Emergency Management Agency (FEMA) recommended against replacing residential or business development in the floodplain. The land on both sides of the river was developed as a park and state recreation area, known as the Red River State Recreation Area. This is a part of the Greater Grand Forks Greenway. It provides a place for residents to enjoy recreation near the river, as well as protecting the cities. The trees and greenery in this zone can help absorb future seasonal flooding. In the northern part of town is a private golf course, Valley Golf Course.

Each June, the Grand Cities Art Fest takes place in the downtowns of Grand Forks and East Grand Forks. The city holds an Art & Wine Walk one Saturday each month during the summer. A farmer's market is another popular event. Local produce and craft items are for sale in the Town Square on Saturdays, starting in late June and running until late September.

The name of the college changed several times throughout its history. One of its most prominent consolidations was as Northwest Technical College from 1992-2003.

In July 2003, the East Grand Forks campus of Northwest Technical College merged with Northland Community & Technical College of Thief River Falls to become a fully comprehensive college The 2-year school has seen steady growth in enrollment in the past 5 years. Across the Red River in Grand Forks is the University of North Dakota.

All content from Kiddle encyclopedia articles (including the article images and facts) can be freely used under Attribution-ShareAlike license, unless stated otherwise. Cite this article:
East Grand Forks, Minnesota Facts for Kids. Kiddle Encyclopedia.