Economy of India facts for kids 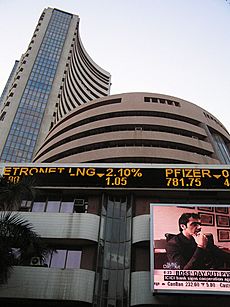 The Economy of India is the fifth largest in the world with a GDP (a year's goods and services) of $2.94 trillion (U.S.). If you consider PPP (purchasing power parity: how much that money can buy in India compared to other countries), the economy is third largest (worth $10.51 trillion U.S.). However, due to India's huge population, the economy was still only $6,209 (considering PPP) per person per year in 2015.

India's economy includes agriculture, handicrafts, industries, and a lot of services. The service sector is the main source of economic growth in India today, though two-thirds of Indian people earn their living directly or indirectly through agriculture. In recent times, due to its many well-educated people who can speak English, India became a pioneer in information technology.

For most of India's independent history, it had strict government controls in many areas such as telecommunications (communication over long distances), banking and foreign direct investment. Since the early 1990s, India has slowly opened up its markets by reducing government control on foreign trade and investment.This was started by Manmohan Singh under the leadership of P.V.Narasimha Rao.From then, the Indian Economy grew at a rapid pace.

The social and economic problems India faces are the increasing population, poverty, lack of infrastructure (buildings, roads, etc.) and growing unemployment. Although poverty has gone down 10% since the 1980s, a quarter of India's citizens still cannot pay for enough food.

All content from Kiddle encyclopedia articles (including the article images and facts) can be freely used under Attribution-ShareAlike license, unless stated otherwise. Cite this article:
Economy of India Facts for Kids. Kiddle Encyclopedia.