Environment of Iowa facts for kids

The ecology of the state of Iowa has been heavily affected by agricultural production, but remaining natural areas reflect a wide varieties of environmental niches.

Iowa's natural vegetation is tallgrass prairie and savanna in upland areas, with dense forest and wetlands in floodplains and protected river valleys, and pothole wetlands in northern prairie areas. Most of Iowa is used for agriculture, crops cover 60% of the state, grasslands (mostly pasture and hay with some prairie and wetland) cover 30%, and forests cover 7%; urban areas and water cover another 1% each. 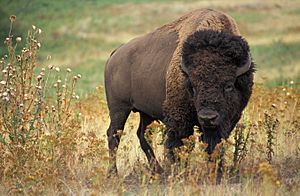 Bison, once common, now found only in captivity in Iowa.

There is a dearth of natural areas in Iowa; less than 1% of the tallgrass prairie that once covered most of Iowa remain intact, only about 5% of the state's prairie pothole wetlands remain, and most of the original forest has been lost. Iowa ranks 49th of U.S. states in public land holdings.

As of 2016, the U.S. Fish and Wildlife Service the lists of threatened and endangered species in Iowa have included the following: 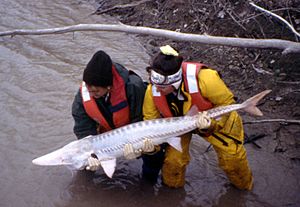 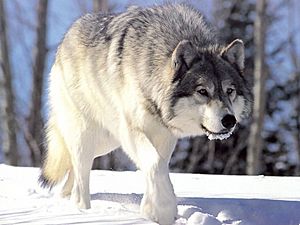 Gray wolf, extirpated from Iowa, but occasionally visits from Minnesota or Wisconsin. 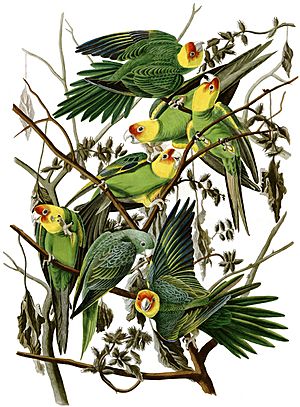 the Carolina parakeet once lived in Iowa, now extinct.

Despite popular perception, Iowa is generally not flat; most of the state consists of rolling hills. Prior divides Iowa into eight landforms based on glaciation, soils, topography, and river drainage: 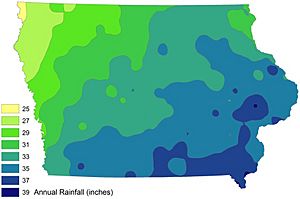 As in most of the U.S., surface water in Iowa is not safe to drink untreated, contamination by agricultural runoff including nitrates, herbicides, pesticides, and animal waste is common. Municipal water supplies are typically heavily chlorinated, this chlorine, combined with high nitrate levels, often give municipal water a strong smell, and the limestone bedrock in much of the state causes hard water.

Some communities, such as Iowa City resort to additional carbon filtration and lime softening coagulation-sedimentation to make the water more palatable. Water treatment is effective but comes at a price; while the Des Moines' advanced filtration system has led to water quality ranked among the nation's best. In January 2015, the Des Moines Water Works "sued drainage districts in three northern Iowa counties, claiming the tiles there act as a conduit that accelerates the movement of fertilizer from farm fields into Iowa waterways". Between 2010 and 2015 more than 60 Iowa cities and towns had high nitrate levels in drinking water.

In 2015, there were a record number of beach closures because of harmful algal bloom in Iowa. 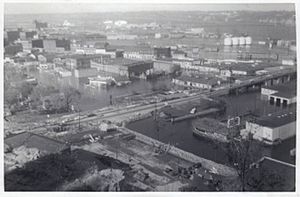 Major flood events occurred in Iowa in 1851, 1892, 1965, 1993, 2008. The Great flood of 1851 hit all of Iowa, and almost destroyed the nascent town of Des Moines. "The Des Moines and Raccoon rivers rose to an unprecedented height, inundating the entire country east of the Des Moines river. Crops were utterly destroyed, houses and fences swept away." After the town of Dudley was destroyed, survivors moved to higher ground and founded Carlisle. The flood of 1851 produced record levels on the Iowa River at Iowa City and the Cedar River at Cedar Rapids that stood until the Iowa flood of 2008. The flash flood of 1892 destroyed much of Sioux City. The Flood of 1965 affected eastern Iowa, from Cedar Rapids to Dubuque, with cities along the Mississippi hardest hit. The 1993 floods were widespread across the upper Midwest, causing extensive damage to Coralville and Iowa City.

The Natural Resources Conservation Service divides Iowa into 23 soil regions. In general, soils of southern, eastern, and western Iowa are loess-derived, while soils of northern and central Iowa are till-derived. Most level areas of Iowa have soils highly suitable for agriculture, making Iowa one of the most productive farming regions of the world.

All content from Kiddle encyclopedia articles (including the article images and facts) can be freely used under Attribution-ShareAlike license, unless stated otherwise. Cite this article:
Environment of Iowa Facts for Kids. Kiddle Encyclopedia.