Erskine is a town in the council area of Renfrewshire, and historic county of the same name, situated in the West Central Lowlands of Scotland. It lies on the southern bank of the River Clyde, providing the lowest crossing to the north bank of the river at the Erskine Bridge, connecting the town to Old Kilpatrick in West Dunbartonshire. Erskine is a commuter town at the western extent of the Greater Glasgow conurbation, bordering Bishopton to the north and Renfrew, Inchinnan, Paisley and Glasgow International Airport to the south. Originally a small village settlement, the town has expanded since the 1970s as a new town, boosting the population to over 15,000. In 2014, it was rated one of the most attractive postcode areas to live in Scotland. 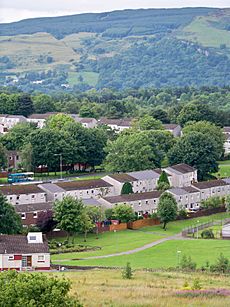 Archaeological evidence states that agricultural activity took place within the area as far back as 3000 BC and it has been inhabited by humans since 1000 BC. The first recorded mention of Erskine is at the confirmation of the church of Erskine in 1207 by Florentius, Bishop of Glasgow. The land around the town was first part of the estate of Henry de Erskine in the 13th century. Sir John Hamilton of Orbiston held the estate in the 17th century until 1703 when it was acquired by the Lords Blantyre. By 1782 there were twelve houses and a church in Erskine. A new church was then built which is still in use today. An influx of workmen moved to the area during 1836-41 due to the construction of the Inverclyde railway line. In 1900 it passed into the ownership of William Arthur Baird, who inherited it from his grandfather, Charles Stuart, 12th Lord Blantyre.

In the late 18th century, the town of Erskine was a hamlet. During this time, stone quays were constructed to support the Erskine Ferry to Old Kilpatrick and Dunbartonshire. This replaced the river ford which had been in place since medieval times. In light of increased industry and infrastructure in the surrounding area, it gradually became a village in the following century. The small church community grew to having 3,000 residents in 1961, when Renfrewshire County Council unveiled its "New Community" plan for the town's development which involved the Scottish Special Housing Association.

The development began in 1971 with the building of both privately owned and rented accommodation which boosted the town's population by around 10,000. Having established itself as a thriving commuter town, the 1990s saw the building of larger and more expensive housing, aimed at more affluent property buyers. Due to apprehension about further expansion of the town, several proposals for further large housing developments have been rejected. This is largely because the town has only one secondary school.

The town expanded in the 1970s with the construction of housing association stock. Since that decade, considerable private housing developments have continued. As more private houses were built in the 1980s, Erskine started to become an attractive place to live due to location factors and accessibility to main roads and the M8 Motorway. Due to this there was a major boom in property development in the 80s and 90s. Most ex-and existing housing association stock are found in the Bargarran, North Barr and Park Mains areas of the town. Private housing is mostly found in the west part of the town, e.g. Garnieland, Flures Drive, Hawthorn, Parkvale, Parkinch, St. Annes, West Freelands. Many house builders that have been attracted to the area include Miller Homes, Avonside, L & C, Beazer, Cala, Kier and Tay Homes.

The town borders a number of nearby settlements, some separated by a rural hinterland. 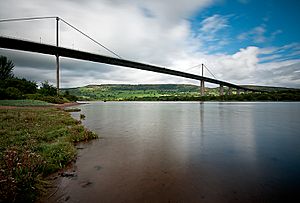 Erskine is generally associated with the Erskine bridge which towers high over the western limit of the town. The bridge is the furthest west crossing point on the river and it soon expands to become the Firth of Clyde estuary. 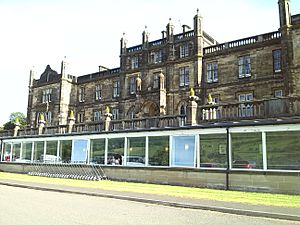 Erskine House was constructed between 1828–45. It was designed by Sir Robert Smirke, the architect of the British Museum. During the First World War it became the Princess Louise Scottish Hospital for Limbless Sailors and Soldiers. It is now the 5-star Mar Hall Hotel, recalling the estate’s former ownership by the Earl of Mar. 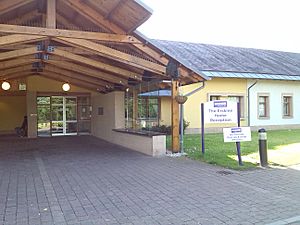 The town is home to the Erskine Hospital, a facility that provides long-term care for veterans of the British Armed Forces. The charity opened as Princess Louise Scottish Hospital for Limbless Sailors and Soldiers in 1916 due to the urgent need to treat the thousands of military personnel that lost their limbs in the First World War. It has gone on to offer help to British ex-service people from all wars since World War One. The charity is close to celebrating its centenary year which is in 2016. It has grown to become the biggest ex-services facility in the country.

The charity has three units within the Erskine area and also specialist units in Glasgow and Edinburgh. The charity has strong links with the British Royal Family. Prince Charles is the charity's patron. He opened the flagship unit called Erskine Home in 2000. Princess Anne has also opened various units for the charity.

The charity host various fundraising schemes throughout the year. They host an annual motorbike meet, a classic car show and an annual dog show. Within the hospital grounds there is a garden centre where profits go to the charity. There is an annual Erskine Week. The fundraising event is to celebrate the official opening of the hospital in 1916. The charity accept the help of volunteers from the public. 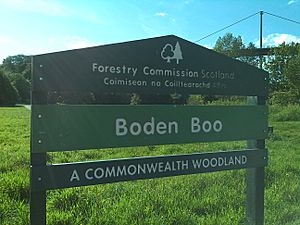 There is a woodland area beneath the Erskine bridge with about 2 miles (3 km) of informal trails, picnic areas and views of the River Clyde. The area is ideal for walking and cycling. The Erskine Beach is also situated here. The Forestry Commission Scotland are responsible for the area.

Erskine also boasts the unique natural habitat of Newshot Island Nature Reserve, a salt marsh which juts out into the River Clyde. Contrary to its name, it is now a peninsula, created from silt left over from the widening and deepening of the river in the 1930s, which connected the island to Erskine. The nature reserve acts as a feeding and resting point for a wide array of migratory birds traveling to and from regions such as North America, Siberia and West Africa.

Erskine is served by Glasgow International Airport, which is located 4 km south of the town.

Old Greenock Road connects Erskine to the M8 motorway, the Erskine bridge and Bishopton. The last tip at the northern side of the A726 also connects to the Erskine bridge. This road cuts through the centre of Erskine itself and is also the primary road for traveling into Paisley. Erskine is serviced by McGill's buses. Buses operate to Glasgow, Paisley, Renfrew, Inchinnan, Clydebank, Glasgow Airport.

All content from Kiddle encyclopedia articles (including the article images and facts) can be freely used under Attribution-ShareAlike license, unless stated otherwise. Cite this article:
Erskine Facts for Kids. Kiddle Encyclopedia.