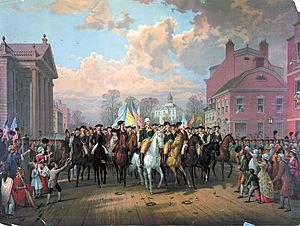 Evacuation Day for New York was the day that the last of the British authorities in the United States (its troops in New York City) left Manhattan on November 25, 1783. After this British evacuation, General George Washington triumphantly led the Continental Army through the city. 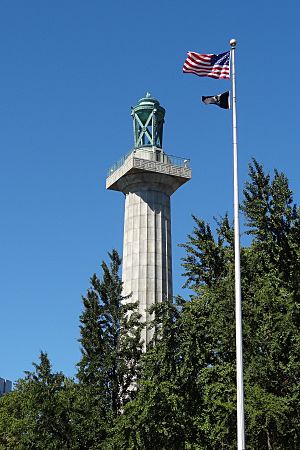 Following the devastating losses at the Battle of Long Island on August 27, 1776, General George Washington and the Continental Army retreated across the East River by benefit of both a retreat and holding action by well-trained Maryland Line troops at Gowanus Creek and Canal and a night fog which obscured the barges and boats evacuating troops to Manhattan Island.

Washington's Continentals subsequently withdrew north and west out of the town and following the Battle of Harlem Heights and later action at the river forts of Fort Washington and Fort Lee on the northwest corner of the island along the Hudson River on November 16, 1776, evacuated Manhattan Island. They headed north for Westchester County, fought a delaying action at White Plains, and retreated across New Jersey in the New York and New Jersey campaign.

For the remainder of the American Revolutionary War, much of what is now Greater New York was under British control. New York City (occupying then only the southern tip of Manhattan, up to what is today Chambers Street), became, under Admiral of the Fleet Richard Howe, Lord Howe and his brother Sir William Howe, General of the British Army, the British political and military center of operations in British North America. David Mathews was Mayor of New York during the British occupation. Many of the civilians who continued to reside in town were Loyalists.

The region became central to the development of a patriot intelligence network, including the spy Nathan Hale.

On September 21, 1776, the city suffered a devastating fire of uncertain origin after the evacuation of Washington's Continental Army at the beginning of the British Army occupation. With hundreds of houses destroyed, many residents had to live in makeshift housing built from old ships. In addition, over 10,000 Patriot soldiers and sailors died through deliberate neglect on prison ships in New York waters (Wallabout Bay) during the British occupation — more Patriots died on these ships than died in every single battle of the war, combined. These men are memorialized, and many of their remains are interred, at the Prison Ship Martyrs' Monument in Fort Greene Park, Brooklyn.

In mid-August 1783, Sir Guy Carleton, then the last British Army and Royal Navy commander in formerly British North America, received orders from his superiors in London for the evacuation of New York. He informed the President of the Confederation Congress that he was proceeding with the subsequent withdrawal of refugees, liberated slaves and military personnel as fast as possible, but it was not possible to give an exact date because the number of refugees entering the city recently had increased dramatically. More than 29,000 Loyalists refugees were eventually evacuated from the city. The British also evacuated over 3,000 Black Loyalists, former slaves they had liberated from the Americans to Nova Scotia, East Florida, the Caribbean, and London, and refused to return them to their American enslavers and overseers as the provisions of the Treaty of Paris had required them to do.

Carleton gave a final evacuation date of 12 noon on November 25, 1783. Following the departure of the British, the city was secured by Colonial troops under the command of General Henry Knox.

Entry into the city by General George Washington was delayed until after a British flag which had been spotted still flying had been removed. A British Union Jack was nailed on a flagpole in the Battery Park at the southern tip of Manhattan as a final act of defiance and the pole was allegedly greased. After a number of men attempted to tear down the British colors, wooden cleats were cut and nailed to the pole and with the help of a ladder, an army veteran, John Van Arsdale, was able to ascend the pole, remove the flag, and replace it with the Stars and Stripes before the British fleet had completely sailed out of sight.

Seven years after the retreat from Manhattan, General George Washington and Governor of New York George Clinton reclaimed Fort Washington on the northwest corner of Manhattan Island and then led the Continental Army in a triumphal precision march down the road through the center of the island onto Broadway in the Town to the Battery.

Even after Evacuation Day, some British troops still remained in frontier forts in territory that the Treaty of Paris assigned to the United States. Britain would continue to occupy some of these Old Northwest forts in the Great Lakes area until 1794 and the signing of Jay's Treaty, and in some cases until 1815, at the end of the War of 1812.

A week later, on December 4, at Fraunces Tavern, at Pearl and Broad Streets, after a "turtle feast" banquet, General Washington formally said farewell to his officers with a short statement, taking each one of his officers and official family by the hand.

Later, Washington headed south, being cheered and fêted on his way at many stops in New Jersey and Pennsylvania. By December 23, he arrived in Annapolis, Maryland, where the Confederation Congress was then meeting at the Maryland State House to consider the terms of the Treaty of Paris. At their session in the Old Senate Chamber, he made a short statement and offered his sword and the papers of his commission to the President and the delegates, thereby resigning as commander-in-chief. He then retired to his plantation home, Mount Vernon, in Virginia. 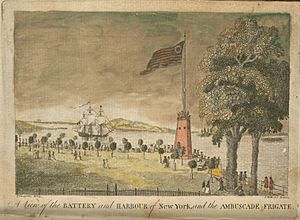 View of the commemorative flagpole at the Battery in its "gigantic churn", during a visit by the French frigate Embuscade (shortly before the Action of 31 July 1793). 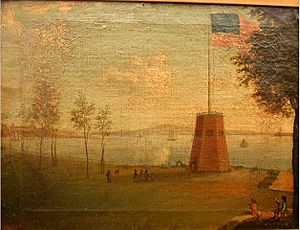 Painting of flagstaff and "churn" at the Battery. 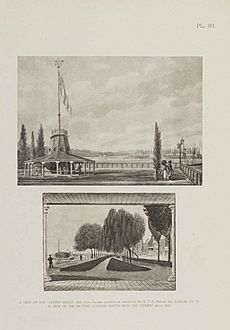 A view of the reconstructed "churn" about 1812, with surrounding gazebo.

The British Fort George was demolished in 1790, being replaced by a public promenade with a commemorative flagpole and a 50 x 100 foot flag, which was relocated and a decorative gazebo added, in 1809.

On Evacuation Day 1790, the Veteran Corps of Artillery of the State of New York was founded.

Washington Irving described a September 1804 visit to the commemorative flagpole, as "The standard of our city, reserved, like a choice handkerchief, for days of gala, hung motionless on the flag-staff, which forms the handle to a gigantic churn," in his A History of New York.

On Evacuation Day 1811, the newly completed Castle Clinton was dedicated with the firing of its first gun salute.

On Evacuation Day 1830 (or rather, on November 26 due to inclement weather), thirty thousand New Yorkers gathered on a march to Washington Square Park in celebration of that year's July Revolution in France.

For over a century the event was commemorated annually with boys competing to tear down a Union Flag from a greased pole in Battery Park, as well as the anniversary in general being celebrated with much adult revelry and corresponding beverages.

All content from Kiddle encyclopedia articles (including the article images and facts) can be freely used under Attribution-ShareAlike license, unless stated otherwise. Cite this article:
Evacuation Day (New York) Facts for Kids. Kiddle Encyclopedia.