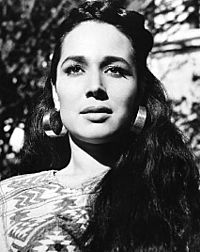 Guillermina Jiménez Chabolla (16 August 1930 – 25 November 2020), known professionally as Flor Silvestre, was a Mexican singer, actress, and equestrienne. She was born in Salamanca, Guanajuato.

Silvestre was married to actor Antonio Aguilar between 1959 until his death in 2007. They had two children; including singer Pepe.

Silvestre died on 25 November 2020 at her home in Villanueva, Zacatecas at the age of 90.

All content from Kiddle encyclopedia articles (including the article images and facts) can be freely used under Attribution-ShareAlike license, unless stated otherwise. Cite this article:
Flor Silvestre Facts for Kids. Kiddle Encyclopedia.