Kids Encyclopedia Facts
(Redirected from Fort Bowie National Historic Site)
This page is about the U.S. Army outpost in Arizona. For the film, see Fort Bowie (film).
Not to be confused with Camp Bowie.

Fort Bowie was a 19th-century outpost of the United States Army located in southeastern Arizona near the present day town of Willcox, Arizona. The remaining buildings and site are now protected as Fort Bowie National Historic Site.

Fort Bowie was established by the California Volunteers in 1862 after a series of engagements between the California Column and the Chiricahua Apaches. The most violent of which was the Battle of Apache Pass in July 1862. The fort was named in honor of Colonel George Washington Bowie commander of the 5th Regiment California Volunteer Infantry who first established the fort. The first Fort Bowie resembled a temporary camp rather than a permanent army post. In 1868, a second, more substantial Fort Bowie was built which included adobe barracks, houses, corrals, a trading post, and a hospital. The second Fort Bowie was built on a plateau about 500 yards (460 m) to the east of the first site. For more than 30 years Fort Bowie and Apache Pass were the focal point of military operations eventually culminating in the surrender of Geronimo in 1886 and the banishment of the Chiricahuas to Florida and Alabama. The fort was abandoned in 1894.

There were two engagements between the United States Army and the Chiricahua led to the construction of Fort Bowie in 1862. The first engagement, known as the Bascom Affair, took place in January 1861 when a band of Apaches raided the ranch of John Ward. Ward mistakenly believed that Cochise and the Chiricahua Apaches were responsible for the raid and demanded that the military take action against Cochise to recover property stolen during the raid. The next month, the army responded to Ward's request by sending Lieutenant George Nicholas Bascom and fifty-four men to Apache Pass to confront Cochise. Bascom managed to capture Cochise and threatened to hold him hostage until Ward's property was returned but the Apache leader managed to escape. Sporadic fighting between Cochise's warriors and Army troops would continue for years to come. 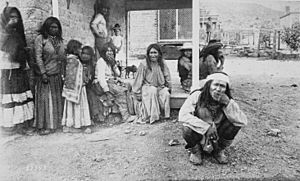 The second major engagement was the Battle of Apache Pass, fought from July 15 to July 16, 1862. A Union regiment under Brigadier General James Henry Carleton was ambushed by a band of Apaches while en route from California to New Mexico where they were to confront Confederate troops. This battle led to the eventual establishment of Fort Bowie in order to protect Apache Pass and an important source of water, Apache Spring. Construction on the first Fort Bowie began in 1862 but this resembled a temporary camp rather than a permanent military fort. In 1868, a second, more substantial Fort Bowie was built on a plateau about 500 yards (460 m) to the east. For more than 30 years Fort Bowie and Apache Pass were the focal point of military operations eventually culminating in the surrender of Geronimo in 1886 and the banishment of the Chiricahuas to Florida and Alabama. The fort was abandoned in 1894.

Fort Bowie first reported on the 1870 U.S. Census as "Apache Pass." It featured 400 residents, all White. It tied with Adamsville for the distinction of the 4th largest community in the Arizona Territory. At the time, it was located in Pima County. In 1880, it reported as "Camp Bowie" with 184 residents (the racial demographics were not reported). In 1881, Fort Bowie was drawn into the newly-created county of Cochise. Although Fort Bowie was still in existence as an active U.S. Army facility, it did not report a population for 1890. It would be formally closed down 4 years later. It has not reported on the census to date.

The Fort Bowie and Apache Pass site was declared a National Historic Landmark in 1960.

The remains of Fort Bowie are carefully preserved, as are the adobe walls of various post buildings and the ruins of a Butterfield Stage Station. The site is located on the unpaved Apache Pass Road which can be accessed from Interstate 10 near Bowie, Arizona or from Arizona Highway 186 just north of the entrance to Chiricahua National Monument. Access to the ruins of Fort Bowie and the visitor center is via a 1.5-mile (2.4 km) foot trail which begins at a parking area along Apache Pass Road. This trail to the old fort passes other historic sites such as Apache Spring, Siphon Canyon, the ruins of the Butterfield Stage Stop and Bascom's Camp.

In 1958 a Western entitled Fort Bowie was made, starring Ben Johnson. The film charted one of the disputes between the US Cavalry based at the fort and the Apaches.

All content from Kiddle encyclopedia articles (including the article images and facts) can be freely used under Attribution-ShareAlike license, unless stated otherwise. Cite this article:
Fort Bowie Facts for Kids. Kiddle Encyclopedia.