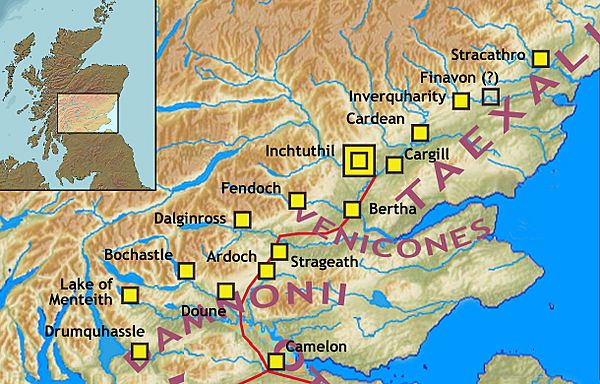 The Gask Ridge is the modern name given to an early series of fortifications, built by the Romans in Scotland, close to the Highland Line. Modern excavation and interpretation has been pioneered by the Roman Gask Project, with Birgitta Hoffmann and David Woolliscroft. The ridge fortifications: forts, fortlets and watchtowers were only in operation for a short number of years, probably a single digit number.

The name "Gask Ridge" refers to the 10-mile (16 km) ridge of land to the north of the River Earn in Perthshire. In Scottish Gaelic, a gasg is a projecting tail or strip of land. In the early 20th century, a line of Roman signal-towers (or watch-towers) was discovered along this ridge between the Roman forts of Strageath and Bertha.

The Gask Ridge system was constructed sometime between 70 and 80 A.D. Construction on Hadrian's Wall was started 42 years after completion of the Gask Ridge (from 122 to 130 AD), and the Antonine Wall was started just 12 years after completion of Hadrian's Wall (from 142 to 144 AD). Although the Gask Ridge was not a wall, it may be Rome's earliest fortified land frontier. The fortifications approximately follow the boundary between Scotland's fertile Lowlands and mountainous Highlands, in Perth and Kinross and Angus. The later Hadrian's Wall and Antonine Wall were further south and by taking advantage of the indented coastline of Great Britain, were considerably shorter. 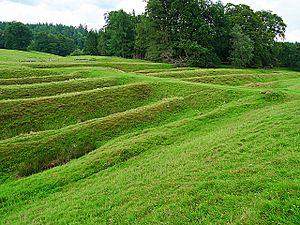 The forts of Drumquhassle, Menteith/Malling, Bochastle, Doune, Dalginross and Fendoch in the south-west were collectively referred to as glenblocker forts in the older literature; they are also called the Highland line forts. Glenblocker refers to their location at the exit of some of the glens or straths and can thus supervise traffic.

All of the forts were originally built during the Flavian occupation in Scotland. A broader group consists of

It is debatable whether Cardean, Stracathro and Doune should be listed among these, as they are sited further away from their respective traffic corridors, although fulfilling the same function.

It has traditionally been thought that these forts were meant to prevent invasions out of the Scottish Highlands into Roman-held territory. This may have been the intention, in cooperation with the other forts on the Gask Ridge and along Strathmore, as only the legionary fortress of Inchtuthil with 5,000–6,000 soldiers would have been strong enough to deal with a major incursion. The smaller forts were more likely to serve as a disincentive to small-scale raiding parties.

The relationship between the Glenblocker forts and the Gask Ridge has in the past been seen as a staged withdrawal. Recent research suggests that the three elements are part of the same frontier system, stretching roughly from Loch Lomond to Montrose. In this hypothesis, the Glenblocker forts controlled access to valleys in the frontier area, which loop back into the frontier, rather than link with the Iron Age settlements further north. Their value as a block to invasion is doubtful, as their situation would have allowed supervision but they lacked the manpower to deter anything but cattle rustling.

Only the legionary fortress at Inchtuthil, conveniently situated for access into Braemar and its hinterland, is large enough to have functioned as a defensive fortification or a jumping-off point for an invasion. The Gask Road and the towers alongside it in this hypothesis guarded the strategically important link to the harbours at the Firths of Tay and Forth and the southern part of the province. 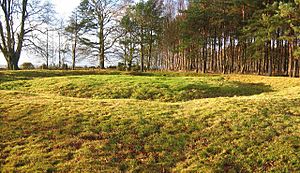 Site of a Roman signal tower at Kirkhill

Tacitus writes in De vita Iulii Agricolae that Agricola was fighting in the area in around 80 AD; the latest coinage dates from 86 AD. This would suggest that the forts were occupied for six years at most. Recent archaeology has shown that many of the forts on the Gask Ridge were rebuilt, sometimes twice, without evidence of destruction through warfare. Further digs may cast some light on this apparent contradiction.

The forts of Ardoch, Strageath and Bertha on the Gask Road, as well as the forts of Cargill in Strathmore and the so-called glenblocker fort of Dalginross have also produced Antonine material attesting to a reuse of the sites contemporary with the Antonine Wall. In the Severan period the army passed through the area, although there are a number of camps across Scotland which are dated to this period (for example, Kair House in Aberdeenshire and the fort at Carpow Roman Fort which is on the Firth of Tay.

North of the Gask Ridge

The permanent sites are complemented by a series of large marching camps (large camps date to the 3rd century) from the Scottish Lowlands into Aberdeenshire and Moray. The Roman legions in the 1st century established a chain of forts at Ardoch, Strageath, Inchtuthil, Battledykes (which is unlikely to date from the same period as the Gask sites), Stracathro and Raedykes, taking the Elsick Mounth on the way to Normandykes, before going north to Glenmaillen and Auchinhove. Unconfirmed sites of possible Roman forts have also been found at Bellie, Balnageith and Cawdor.

In the 1990s researchers discovered new possible Roman fortifications north of Inverness and the Moray Firth. The most important are Tarradale and Portmahomack. These are being studied by RCAHMS to verify that they are Roman. Several chronological reconstructions of their role have been made. 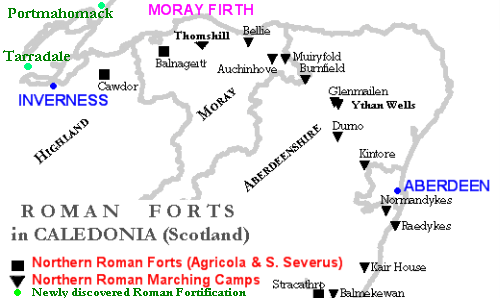 This map shows some Roman camps in northern Scotland. The possible Roman camp at Bellie is likely to be the northernmost fortification constructed by the Imperial machine in Scotland.

All content from Kiddle encyclopedia articles (including the article images and facts) can be freely used under Attribution-ShareAlike license, unless stated otherwise. Cite this article:
Gask Ridge Facts for Kids. Kiddle Encyclopedia.