Geography of Sheffield facts for kids

Sheffield is the most geographically diverse city in England. The city nestles in a natural amphitheatre created by a number of hills forming the eastern foothills of the Pennines, and the confluence of five rivers: Don, Sheaf, Rivelin, Loxley and Porter. As such, much of the city is built on hillsides, with views into the city centre or out to the countryside. The city is roughly one third urban, one third rural and one third in the Peak District. At its lowest point the city stands just 29 metres above sea level at Blackburn Meadows on the Rotherham border, rising up to over 500 m in some parts of the city to a peak of 548m at High Stones on the Derbyshire border; however, 89% of the housing in the city is between 100 and 200 metres above sea level. Over 95% of the population resides in the main urban area.

Panorama of Sheffield from Meersbrook Park.

Sheffield also has more types of habitat than any city in the UK. As well as urban, parkland and woodland it has agricultural and arable land, moors, meadows and freshwater based habitats. Large parts of the city are designated as Site of Special Scientific Interest including several urban areas. 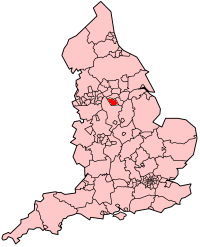 The city lies directly next to Rotherham with the M1 designating much of the border between them. Although Barnsley Metropoliton Borough also borders Sheffield to the north, the town itself is a few miles further. Directly to the west of the city is the Peak District National Park and the Pennine mountain range, while the lowlands of the South Yorkshire Coalfield lie to the east. The southern border is shared with Derbyshire. Over the past hundred years this has been moved south as the Sheffield urban area has grown to encompass formerly rural Derbyshire villages.

The Sheffield metropolitan area includes the City of Sheffield, Rotherham, Doncaster and Barnsley which makes up the county of South Yorkshire as well as the small towns and villages of neighbouring North East Derbyshire and North Nottinghamshire that make up the Sheffield city region which has a population of 1,811,701 in 2003. These include Eckington, Worksop, Killamarsh, Dronfield, Chesterfield and Bolsover. These areas all form an economic base for Sheffield.

The oldest rocks found in the area, formed around 320 million years ago, are of the Carboniferous Period (including Millstone Grit, limestone and Coal Measures), when the region was tropical.

Carboniferous rocks in Europe generally consist of a repeated sequence of limestone and/or sandstone, shale and coal beds. The Carboniferous coal beds provided much of the fuel for power generation during the Industrial Revolution. (Another natural source of fuel in the area was peat, the neighbouring peat moors having started forming around 10,000 years ago).

The South Yorkshire Coalfield, formerly in the West Riding of Yorkshire (of which Sheffield was traditionally part), was one of the chief sources of mineral wealth in the region. Several types of coal were present in the county, from bituminous (ideal for domestic heating) to "Thick Coal", of a semi-anthracitic quality, appropriate for use in iron-smelting and in engine furnaces. Associated with the Upper Coal Measures were valuable iron ore deposits, occurring in the form of nodules. Large quantities of locally occurring fireclay were also exploited, as well as ganister (a clay used to make refractory furnace linings). 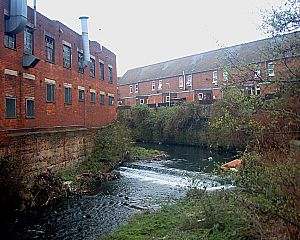 The city of Sheffield derives its name from the River Sheaf which Until the 17th century was written as Scheth or Sheath. Sidney Oldall Addy equates the origins of this word with the Old English shed (as in water-shed) or sheth, which mean to divide, or separate. Historically, the Sheaf, along with Meers Brook and a minor tributary, Limb Brook, formed part of the border separating the Anglo-Saxon kingdoms of Mercia and Northumbria.

Limb Brook rises at the village of Ringinglow, flowing east to merge with the Sheaf and it was close to this point that part of the stream was diverted to provide the goit for the Abbeydale Industrial Hamlet millpond.

The source of the River Sheaf itself is the union of Totley Brook and Old Hay Brook and its main tributaries are Porter Brook and Meers Brook. (Totley Brook passes south of Totley and meets Old Hay Brook at Needham's Dyke). The Sheaf flows northwards to join the River Don near Blonk Street Bridge in the city centre. This lower section of the River Sheaf together with the River Don, between the present Blonk Street and Lady's Bridge, formed part of the perimeter of Sheffield Castle.

Porter Brook's source is just inside the Peak District National Park, to the west of the city, at Clough Hollow, also near Ringinglow. From here it flows eastward to meet the Sheaf, at a point now located underneath Sheffield Midland Station. 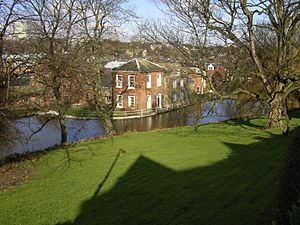 The River Don rises in the Pennines and flows for 70 miles (110 km) eastwards, through the Don Valley, via Penistone, Sheffield, Rotherham, Mexborough, Conisbrough, Doncaster and Stainforth. The river's major tributaries are the Loxley, the Rivelin, the Sheaf, the Rother and the Dearne.

The sources of the Rivers Loxley and Rivelin lie to the north west of Sheffield, on the Hallam moors above Low Bradfield. The Loxley flows eastwards through Damflask Reservoir and joins the Rivelin at Malin Bridge, before flowing into the River Don at Owlerton, in Hillsborough. The rivers are relatively fast flowing, especially the Rivelin, being fed by a constant release of water from the nearby moorland peat. The Rivelin's flow was exploited for centuries as a power source, driving the water wheels of up to twenty industries (forges, metal-working and flour mills) the earliest of which dates back to 1600.

The River Rother rises at Pilsley near Clay Cross in Derbyshire, and from there flows northwards through the eastern suburbs of Sheffield to its confluence with the River Don at Rotherham. Its main tributaries are the River Drone, the River Hipper and the River Doe Lea.

Being at the confluence of several natural waterways, the development of a canal system marked an important evolution in the city's transport network, initially for commercial use and, more recently, for leisure activities. The Sheffield and South Yorkshire Navigation (S&SY) is a system of navigable inland waterways (canals and canalised rivers) in Yorkshire and Lincolnshire.

The village of Sheffield dates back to before the beginning of the last millennium. It grew around a fortified building (later a castle) located at the confluence of the rivers Sheaf and Don. A number of hamlets and villages grew up in the surrounding area, many around the fledgling industries that utilised the area's five fast flowing rivers, along with locally mined coal and iron. Surviving examples of this early industry are now maintained as museums at Abbeydale Industrial Hamlet, which dates back to at least the 13th century, and Shepherd Wheel.

The villages steadily grew around this industry. By the 18th century Sheffield had become a thriving market town and was already the country's leading cutlery producer.

With the coming of industrial revolution Sheffield became one of England's fastest growing towns. It grew over ten times in size to 400,000 within the 19th century. However, this expansion had a devastating impact on the surrounding area. Smog became a regular occurrence especially in the city centre that was at the bottom of a natural bowl. The River Don became one of the most polluted rivers in Europe. In his 1937 book The Road to Wigan Pier George Orwell said that Sheffield 'could justly claim to be called the ugliest town in the Old World'.

However, in the 1930s Sheffield City Council and public benefactors such as J.G.Graves started buying rural land around Sheffield in order to protect it from developers. This was one of the earliest examples of greenbelt land.

The residential areas cover the majority of the south and north-west of the city, the most affluent areas being in the south-west. A lot of the housing is post-World War II due to wartime destruction of housing by German bombing and post war slum clearance. This quite often took the form of large scale apartment buildings such as Park Hill, although some have since been demolished due to poor construction and high crime rates.

Large parts of the city are industrial, mainly in north-east. These areas saw a large decline during the 1970s and 1980s. The Sheffield Development Corporation was created to arrest this slide. However most of the new developments, such as Meadowhall Centre, are in the service industry. It was also the location for most of the venues for the World Student Games and now hosts the English Institute of Sport.

Although the vast majority of the green space is outside the main urban area, all the parkland and 14.00 km2 (3459 acres) of woodland is within the urban area. The largest park is Graves Park at 0.83 km2, closely followed by Endcliffe Park. The largest wood is Ecclesall Woods at 1.35 km2 (340 acres).

Sheffield is made up of numerous districts that vary widely in size and history. Many of these districts developed from villages or hamlets that have become absorbed into Sheffield as the city has grown. For this reason, whilst the centre of most districts is easy to define, the boundaries of many of the districts are ambiguous. The districts are largely ignored by the administrative and political divisions of the city, instead it is divided into 28 electoral wards, with each ward generally covering 4–6 districts. The electoral wards are grouped into six parliamentary constituencies, although due to a different review cycle the ward and constituency boundaries are currently not all conterminous.

While the majority of the districts are within the main urban area of Sheffield some of the outlying areas remain separated by rural land. The largest such district is Stocksbridge and Deepcar, which contains around 13,500 people. The rural two thirds of the city contains under 3,000 people.

Like the rest of the United Kingdom, the climate in Sheffield is generally temperate. Between 1971 and 2000 Sheffield averaged 824.7 mm of rain per year, with December the wettest month (91.9 mm) and July the driest (51.0 mm). The average yearly high temperature is about 12 °C (53 °F), and yearly lows tend to remain around an average of 6.5 °C (44 °F). July was also the hottest month, with an average maximum temperature of 20.8 °C. The average minimum temperature in January and February was 1.6 °C.

Due to the differences in altitude, the weather can be vastly different over various parts of the city. Deepcar and Stocksbridge tend to be among the first to receive snowfall and get heavier downpours.

All content from Kiddle encyclopedia articles (including the article images and facts) can be freely used under Attribution-ShareAlike license, unless stated otherwise. Cite this article:
Geography of Sheffield Facts for Kids. Kiddle Encyclopedia.