Gleichenia microphylla is a small fern growing in Australia and New Zealand.

A common plant, often seen growing under waterfalls, in swamps, under cliffs and in tall open forest. It prefers high humidity and good levels of sunshine and moisture. It can form large colonies.

In 1810 it appeared in Prodromus Florae Novae Hollandiae, authored by Robert Brown. 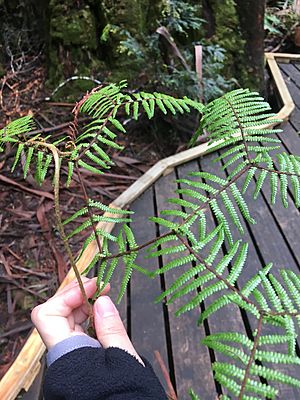 The fronds of G. microphylla are forked several times.

Gleichenia microphylla's rachis on major branches has conspicuous and numerous bundles of bristles that are shiny, short, and amber to dark brown in colour. It also has less numerous and scattered fringed scales. It has 2 to 6 cm long linear ultimate branches with close-set pinnules. The undersurface of pinna-rachis has no hairs or scales. The uncoiling tips and young rachises are covered in red-brown bristles and have some fringed scales. The pinnules are 1 to 3 mm long and have a blunt, oblong-triangular shape. The lower surface of the pinnules are flat or slightly concave and never rolled inwards on all edges to make a pocket. The underside of a fertile frond has 2 to 4 of sori (or rarely 1 or 5). The sporangia have a shiny, bright yellow to yellow-brown colour and exist around the central projection. Fronds are forked several times and they grow to 2 to 4 m in length. 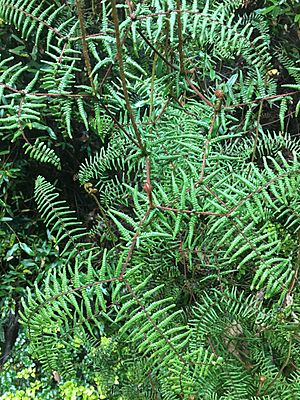 In Australia, it is common in Victoria and Tasmania (including Flinders Island and King Island) and also can be found in New South Wales, Queensland, Northern Territory, South Australia, and Australian Capital Territory. It has not been recorded in Western Australia.

Gleichenia microphylla can hybridise with G. dicarpa and the hybrids are called G. xpunctulata and they are morphologically intermediate between both species. It can be found in the broad area of overlapping distributions of the parental species. 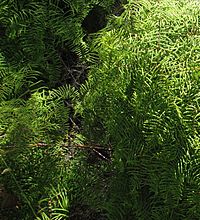 All content from Kiddle encyclopedia articles (including the article images and facts) can be freely used under Attribution-ShareAlike license, unless stated otherwise. Cite this article:
Gleichenia microphylla Facts for Kids. Kiddle Encyclopedia.