Hardeeville is a city in Jasper and Beaufort counties in the U.S. state of South Carolina. The population was 7,473 as of the 2020 census, an increase of over 150% since 2010. Hardeeville is included within the Hilton Head Island-Bluffton-Beaufort, SC Metropolitan Statistical Area.

For many years, Hardeeville billed itself as the "Lowcountry Host" due to the prevalence of lodging and traveler-oriented facilities along U.S. Highway 17 and later Interstate 95. In recent years, the city has expanded its economic focus due to high population growth. According to Census estimates, Hardeeville posted the highest population growth rate of any municipality in South Carolina, growing 53.4 percent from 2010 to 2014. 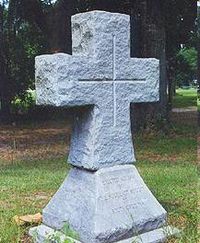 This marker indicates the former location of the Purrysburg settlement

The earliest European settlement in the region was Purrysburg, a former Swiss Huguenot settlement founded in 1732 on the banks of the Savannah River, about two miles (3 km) northwest of the current city's center. The settlement ultimately failed as disease and competition from growing Savannah proved too much for the local settlers to overcome. Many left the immediate area, moving elsewhere in the Lowcountry region (including a new hamlet called Switzerland) or upriver to the new communities of Augusta and Hamburg, though some remained.

The area saw some skirmishes between Union and Confederate forces during the Civil War. The Charleston and Savannah Railway (today's CSX railway) was considered a prized possession and major strategic goal for Union forces. In an effort to defend the railroad, the Battle of Honey Hill was one of the last battles won by southern forces in late 1864, shortly before General William Sherman attacked South Carolina after his "March to the Sea" in Georgia. 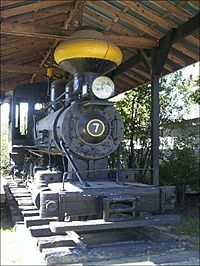 The area within the city was settled in the 19th century by Isaac Hardee, a native North Carolinean. Through his son, White William Hardee's efforts, a depot and general store along the Charleston to Savannah railway opened up. This depot and the surrounding areas became collectively known as Hardee's Station, and eventually as Hardeeville at the town's founding in 1911. The area became renowned for its timber operations with the Argent Lumber Company, which had one of the largest logging operations in the world centered around the town. Unique to the area was the swamp logging procedure that was utilized, which made operations far more treacherous than standard logging. 3 ft (914 mm) narrow gauge railroads were constructed to help deliver timber to a processing area, where the lumber would be lifted onto 4 ft 8+1⁄2 in (1,435 mm) rail cars or trucks headed to all parts of North America. As a tribute to Argent's impact on the community, the city was donated an H.K. Porter 2-8-0 steam locomotive (c/n 4776, built January 1911), Argent Lumber Company Number 7, for display in 1960.

Growth continued at a modest pace throughout the rest of the 20th century, though timbering operations were gradually scaled back as overseas lands became more sought after due to lower costs and more standard logging procedures. In spite of the decline of the logging industry, the construction of U.S. Route 17 and later Interstate 95 provided a new type of commerce; motorist services such as motels, restaurants, and gas stations. The development of Hilton Head Island as a resort destination had a further impact on the community, with an additional interstate exit providing greater commercial opportunity and affordable costs of living for service employees who moved to the city.

At the start of the 21st century, development pressures along U.S. Route 278 corridor became a central concern for city leaders. In response, Hardeeville began to annex large undeveloped parcels of land that were previously held by timbering and paper concerns. These annexations were done in order to guide new growth into larger planned developments, increasing the city limits from 5 square miles (13 km2) in 2000 to over 50 square miles (130 km2) in 2010. In 2004, Core Communities became the first company to sign a development agreement with the city and began constructing Tradition Hilton Head. In the following years, other developments have begun or announced plans at developing in these areas. Although the recession beginning in late 2007 had significantly slowed down the pace of development, the city has continued to grow due to continuous commitments from existing developers, and new investment related to industrial and commercial opportunities. These investments have allowed the city to make improvements to its existing areas in the form of streetscaping projects, improved community facilities, and general reinvestment.

According to the United States Census Bureau, the city has a total area of 49.7 square miles (129 km2), all land in 2010. Nearly 90 percent of the city limits was annexed between 2000 and 2010, primarily to accommodate large, planned development communities located on former lands devoted to logging and timber harvesting.

Although a small community in terms of population, Hardeeville is among the ten largest municipalities in South Carolina based on incorporated limits. The city has a small downtown area along with newly developing areas primarily along the U.S. 278 corridor. At the present time, there are two distinct population centers: Downtown and New River.

"Downtown" or "Historic Hardeeville" refers generally to the original city limit extents of the community, bound between Exits 5 and 8 along I-95 and between the interstate and the CSX rail line. Downtown consists mostly of one-story single-family homes and one to two story apartments. Main Street (S.C. 46) and Whyte Hardee Boulevard (U.S. 17) provide the majority of commercial development in downtown. Locally oriented commerce is located along Main Street and northern portions of Whyte Hardee Boulevard. Nearby neighborhoods often associated with downtown include Car Moorer Acres, Pine Arbor, Heritage Place, Jenny Greeene, and Deerfield Village.

The "New River" area of Hardeeville contain large-scale planned developments along the U.S. 278 and Argent Boulevard corridors. A vast majority of population growth since 2005 has been attributed to these developments, which were annexed into the city between 2004 and 2010. These developments include Hilton Head Lakes, Hampton Pointe, Hearthstone Lakes, and Jasper County portions of Sun City Hilton Head. Additional neighborhoods include the Courtney Bend apartments and Camp Lake Jasper, an RV park.

Hardeeville's weekly newspaper of record is Hardeeville Today, [1] which is a subsidiary of the Savannah Morning News. Other local newspapers that serve the community include the Jasper County Sun, and the Island Packet. The city of Hardeeville also owns and operates a public affairs channel (HTVN Channel 9) that can be seen on Hargray cable services. Broadcast channels shown on local services originate in the Savannah market.

The city hosts celebrations throughout the year to garner community involvement and interest. Among the more notable celebrations include:

The city is currently home to the University of South Carolina Beaufort Sand Sharks baseball and softball teams. The Sand Sharks have played at the Richard Gray Baseball Complex since 2008 and will continue games at the facility until a new facility is built on the USCB's south campus in Beaufort County.

The city is home to several Christian denominations, with most churches located in the downtown area. Other religious faiths have houses of worship in surrounding communities, especially in Beaufort, Hilton Head, and Savannah.

Downtown Hardeeville has traditionally been the center of commercial activity in the city, with traveler services along U.S. 17 mixing together with more local-oriented businesses along Main Street. Hardeeville's two exits along Interstate 95 are some of South Carolina's more popular stopping points, with traveler-oriented commercial services. Although Exit 5 has been in existence longer and has more commercial activity, Exit 8 has experienced recent commercial growth as well. Exit 8 also is the access point to the local hospital and a popular county park located within 1-mile (1.6 km) of the exit.

Among industrial and business park locations, the Hardeeville Industrial Park is among the most successful locations in the city, connected both to road and rail networks. Additional light industrial development is occurring in other areas of the city, especially along the Argent Boulevard and Highway 170 corridors.

In addition to existing industrial locations, the proposed RiverPort development on the western and southern edges of the city intends to focus on logistics, transportation, and port-related industrial uses along the U.S. Highway 17 corridor. A future Exit 3 along Interstate 95 is planned to facilitate industrial development in RiverPort and alleviate truck congestion through downtown Hardeeville.

New commercial opportunities are planned for along the U.S. 278 corridor.

The Hardeeville South Campus contains two public schools: Hardeeville Elementary (grades K-5) and Hardeeville-Ridgeland Middle School (grades 6-8). The Ridgeland-Hardeeville High School in Ridgeland receives high school students who live in the city and all of Jasper County. Additional schools are planned in the future through development agreements signed by private developers and the city.

A fair number of schoolchildren living in and around Hardeeville attend Royal Live Oaks Academy of Arts & Sciences, a public charter school under the South Carolina Public Charter School District. Opened in August 2012, the school is just beyond the city limits and serves grades K-12. A new school facility for the charter school is expected to be complete in 2015. Private schools in the area include Thomas Heyward Academy, which was founded as a segregation academy, in Ridgeland and St. John Paul II Catholic School in Okatie.

The Hardeeville Community Library is a branch of the Allendale-Hampton-Jasper Regional Library system and serves residents in Hardeeville and southern Jasper County. A new library facility is expected to open in 2015. Two local institutions comprise the current extent of higher education in the Hardeeville area. Both the University of South Carolina Beaufort South Campus and the Technical College of the Lowcountry New River Campus are located just outside the city limits in Beaufort County.

CSX Transportation's Charleston Subdivision (also known as the Charleston-Savannah Railway) currently operates both freight trains and passenger trains (via Amtrak) along the lines, but do not stop at Hardeeville.

Local public transportation and dial-a-ride service is provided by Palmetto Breeze, a regional transportation authority run by the Lowcountry Council of Governments, which serves as the regional Metropolitan Planning Organization (MPO).

Since 2005, water and sewer services are provided by the regional Beaufort-Jasper Water and Sewer Authority (BJWSA), based in Okatie. South Carolina Electric and Gas Company (SCE&G) and Palmetto Electric Cooperative are the major suppliers of power to the city. Hargray provides telephone and broadband services. Republic Waste provides solid waste services.

All content from Kiddle encyclopedia articles (including the article images and facts) can be freely used under Attribution-ShareAlike license, unless stated otherwise. Cite this article:
Hardeeville, South Carolina Facts for Kids. Kiddle Encyclopedia.